Yahoo announces third quarter earnings: it's all about the Alibaba

Yahoo announces third quarter earnings: it's all about the Alibaba

The real story, however, is Yahoo's massive stake in the Chinese web giant, Alibaba. Yahoo's earnings show Alibaba has been growing rapidly and will provide a huge cash infusion to Yahoo if it goes public later this year as expected. Aside from that, Yahoo's financials were, while better than expected, another tepid series of slow declines.

Rather than focusing on the still ailing financials, CEO Marissa Mayer has chosen in recent quarters to tout traffic and engagement numbers instead. Last quarter she claimed Yahoo had 350 million monthly mobile users out of 800 million active uniques overall, a growing smartphone set for a company that began life as a web portal.We'll update this post with her thoughts during today's call.

Regardless of the slow decay that continues in its core business, Yahoo's stock has risen to a six year high, driven in part by Marissa Mayer's appointment as CEO. So far Mayer has focused on acquiring startups, including the pricey purchase of Tumblr for $1.1 billion. Reportedly her goal is to bolster Yahoo's talent in mobile and turn it from an aging desktop giant into a suite of apps that customers use every day. On today's call, she said Yahoo has hired just under 1000 new engineers during the last year.

Mayer said during today's earnings call, that increased engagement on mobile and desktop propelled Yahoo's traffic back to where it this time during 2011, which for a company on a long slide counts as a win. 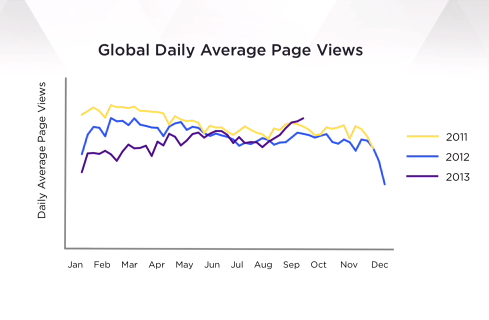 The other piece of Yahoo's surging stock price is its remaining stake in Chinese web giant Alibaba. Yahoo sold 40 percent of its Alibaba stake in September of 2012 for $7.1 billion in cash, but still holds a 24 percent stake in Alibaba that could be worth as much as $28 billion during Alibaba's upcoming IPO. 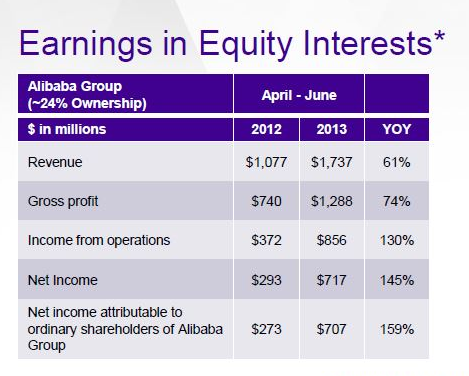