Should you go to jail for posting video of a real murder?

Should you go to jail for posting video of a real murder?

BestGore.com is a vile website for videos of gang executions, women being tortured, body parts being maimed — anything to turn people’s stomachs. The content is revolting and a lot of it is real. But does Mark Marek, Best Gore’s 38-year-old owner, deserve to go to jail?

In May, Best Gore published a video entitled "1 Lunatic 1 Icepick," which showed a gruesome 10-minute murder. "1 Lunatic 1 Ice Pick is without a doubt the sickest thing you will have ever seen in your entire life," Marek wrote at the time.

The clip showed the actual murder of Lin Jun, a 33-year-old engineering student from China, carried out by a psychopath who distributed the video online and then mailed the victim’s body parts to political parties. Murder trial proceedings for the suspected killer, a man who goes by the name Luka Magnotta, will begin in November.

"without a doubt the sickest thing you will have ever seen in your entire life."

In the meantime, authorities in Canada have decided to charge Marek as well. The website owner has been accused of what sounds like an Oscar Wilde-era crime: "corrupting morals," a 1949 law that can carry a jail sentence of two years and potentially much higher.

The law says anyone who "makes, prints, publishes, distributes, circulates, or has in his possession for the purpose of publication, distribution or circulation any obscene written matter, picture, model, phonograph record or other thing whatever" may be indicted for a crime. According to case law, material becomes "obscene" when it mixes sex with violence or degradation. The law also covers "disgusting objects," "indecent shows," and advertisements for abortion methods.

"It’s a very rare charge," says Laurie Wood, Marek’s lawyer. "I can only find a half dozen cases."

The last Canadian to be charged with corrupting morals was Remy Couture, a special effects artist who posted grisly staged murders on his website for a "fake diary of a serial killer." In the end, a jury ruled that the images and videos were not criminally obscene.

"The offensive material is already out there. You can’t stop it."

A conviction would have potentially wide-ranging consequences for free speech in art, entertainment, and journalism, Wood says. In her opinion, "1 Lunatic 1 Icepick" is less graphic than the show "Spartacus."

Besides, she says, the police are too late. "The offensive material is already out there," she says. "You’re going to plug one hole and open another one. You can’t stop it. It’s the internet. It’s all over the world."

But would a conviction set a dangerous precedent for free speech in Canada? David Fewer, director of the Canadian Internet Policy and Public Interest Clinic at the University of Ottawa, says no. Obscenity in Canada is well-defined, he says, and a conviction would not change the standard. He expects Marek will have a difficult time arguing that the video is not obscene. "This is just flat-out over the line," Fewer says. "He's not going to have a good defense." 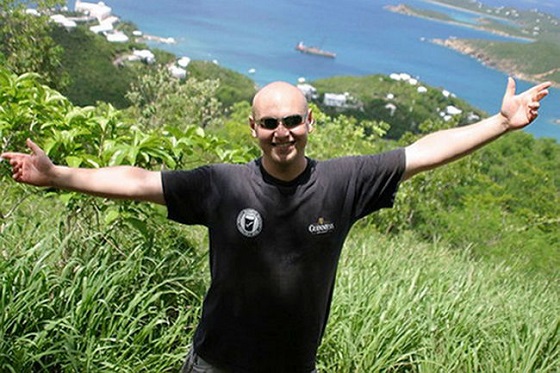 Marek. (Photo: provided by Marek to the Edmonton Sun).

Fewer points out that Marek could have edited the video or released still images. "What interest does the public have in seeing that video?" he says. "There is no legitimate interest in seeing that top to bottom, and even if there is, there is no justification for putting that on the open internet available to children."

Best Gore fans have a word for people with this kind of attitude: "sheep." By contrast, the site's readers refer to themselves as "aware individuals." There is a large disclaimer when you go to Best Gore: "WARNING: Extremely Graphic and Explicit Content." The site offers you a choice: enter to be exposed to "reality," or click on a picture of a puppy to be redirected to imbecile.me, a parody site that is mostly ads.

Marek was not able to answer questions by publication time, but The Verge had an email exchange with him when the video first came out in June of 2012, long before he was charged with a crime. Best Gore had been getting 3 million unique monthly readers, which jumped to half a million readers a day after the "1 Lunatic 1 Icepick" video came out, he said at the time.

Many sheep come to Best Gore because they’re curious to see a beheading. I have warnings all over the place, but sheep just don’t care. They think they can handle it, but then see that it’s not all pink like the world they see through their fantasy shades and get offended. As a result, I receive dozens of death threats and hate mail each and every day.
The others, the aware individuals view the content to stay on top of things. They want to know the truth and are not afraid to face it. They want the real truth, the raw truth, the uncensored truth. Not the played down one presented by the media with an agenda.Marek became interested in the gore genre when he saw photos of a hand mangled by a meat grinder on the prototypical gross-out site rotten.com. He doesn’t like the term "gore." "I prefer to call it ‘reality,’" he says. He operates more than a dozen sites in addition to Best Gore. When a judge banned him from using the internet except for his own defense, he argued that he needed to be online 18 hours a day to run his empire.

Under the law, Marek can be acquitted of corrupting morals "if the public good was served." This case has a lot of heat, however. Calls for Marek’s arrest started soon after the story came out. The video of Lin’s terrible murder, which includes dismemberment, cannibalism, and necrophilia, is still circulating online and has prompted a reaction video meme. Lin’s parents are devastated and angry. "The most unbearable pain for me is that the video got posted on the internet," his mother, Zhigui Du, told Yahoo News. "People watched it over and over. It's like my son is being murdered again and again."

Marek argues that gore is a reflection of real life, and that he is the victim of politically motivated persecution by people who can’t handle the truth. That line is unlikely to go over well with a jury, and the obscenity definition depends on community standards. The fact that "1 Lunatic 1 Icepick" depicts a real murder could make jurors less sympathetic even to the free speech argument.

No trial date has been set, but Marek’s next court date is November 1st. The prosecution declined to comment on the case.

Read more: Snuff: Murder and torture on the internet, and the people who watch it