Big sensor, small camera. It’s been the goal of nearly every camera manufacturer on the planet, but the closest we've gotten are fixed-lens cameras like the Sony RX-1 and entirely new inventions like the Micro Four Thirds sensor. Today, Sony’s announcing what might be the closest thing we’ve seen yet to the perfect mix: the much-leaked Alpha 7 and 7R. They’re closer in size and design to Sony’s NEX cameras, yet come with huge full-frame sensors and a suite of high-end interchangeable lenses. They’re pro-level cameras, with pro-level prices: the 7 starts at $1,999.99 with a kit lens, and the 7R will cost at least $2,299.99. But Sony’s new cameras signify a new era, and a genuine accomplishment: high-end cameras don’t have to be huge anymore.

Read Next: Hands-on with the Sony A7 and A7R

At about a pound each, and barely larger than your average NEX, it’s hard not to believe Sony when it calls the new Alphas "the world’s smallest full-frame interchangeable lens models." They combine the aesthetics of Sony’s NEX-7 and the RX-1 with a dense, textured black body that is comfortable if a little heavy, plus a leathery grip, front and rear dials, and a sizable hump for the integrated viewfinder. The hump, Sony told us, is purely a design flourish — since it’s an electronic viewfinder there’s no mirror or pentaprism, but it looks nice. The design is a little boxy, with little of the retro chic of the Fujifilm X-Pro 1 or the Olympus OM-D E-M1, but it’s well-made and intuitive to use. 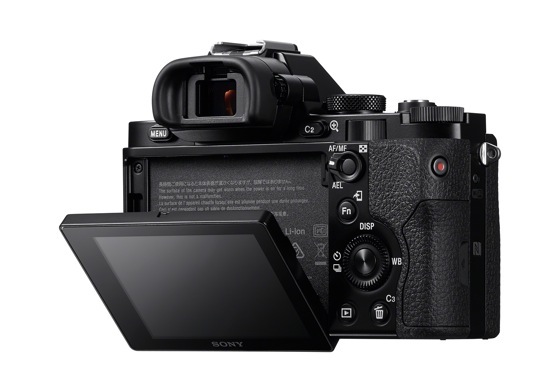 There's a lot of control even on the smaller body

With the two dials, plus a handful of function buttons and a redesigned menu system that finally looks more suited to a camera than a toy cellphone, the 7 and 7R should offer plenty of manual control and quick handling — the buttons are more cramped than they might be on a DSLR, and you’ll definitely do more digging in menus, but operation is mostly quite quick.

With these cameras, though, what's inside counts most. The Alpha 7 comes with an effective 35mm full-frame, 24.3-megapixel sensor, and Sony’s Bionz X image processor. The camera’s sensor range goes up to ISO 25,600, it outputs 14-bit RAW images, shoots at 5 frames per second, captures 1080p video at 60 or 24 frames per second, and can output 4K images and uncompressed HDMI. The 7R goes even a step further, by removing the low-pass filter and adding a 36.3-megapixel sensor (the same resolution as the Nikon D800, which feels comically enormous next to the 7R). The photos we saw from both look fantastic, with remarkable detail and sharpness — every bit the equal of the D800 and even the Canon 5D Mark III, which Sony doesn’t shy away from comparing its cameras to. These cameras are powerhouses. 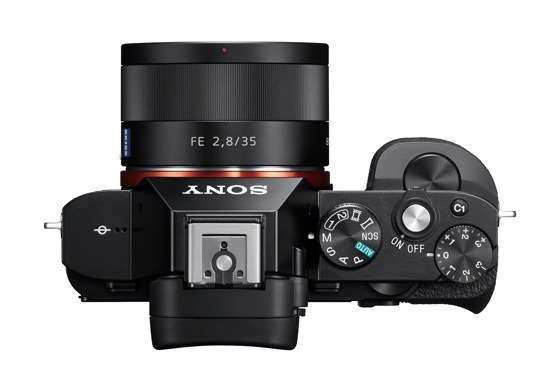 Both models have super-sharp 3-inch, 1.23-million-dot tilting LCDs on the back, and integrated 2.4-million-dot OLED viewfinders. As always, the picture in an EVF is slightly less accurate than an optical viewfinder, but when we used the 7 and 7R we were impressed with how bright, responsive, and flat-out huge the viewfinder is.

The primary knock on the $2,800 RX-1 was its slow autofocus, a problem the new Alpha models appear to have solved. The 7’s hybrid autofocus, which combines the speed of phase-detect AF with the accuracy of contrast-detect, works well; like the Canon T4i or Sony’s NEX-5R, the camera focused in the blink of an eye. The 7R doesn’t have hybrid autofocus, and did feel a little slower, but certainly not problematically so.

Wi-Fi and NFC continue their run across Sony’s camera lineup here, using the PlayMemories Mobile app to turn your phone into a remote control or viewfinder. The experience doesn’t seem to have changed or improved much, though, which doesn’t bode well for the new devices. 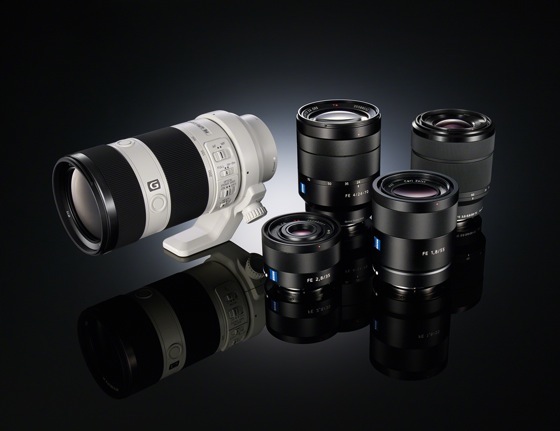 Sony needs to build its lens ecosystem, and fast

With the new cameras comes a new branding strategy for Sony, too: the "NEX" name is going to be phased out in favor of simply "Alpha." For now, it’s a confusing bit of overlap that the 7 and 7R use Sony’s E-mount lenses, the same ones on the cheaper NEX line. Old lenses will work, though they’ll be cropped thanks to the difference in sensor size, but Sony’s announcing five new full-frame E-mount lenses for the new cameras. It’s a small number, and Sony needs to expand it quickly to compete at the high end, but with two bright prime lenses and a couple of zoom lenses, the basics are at least covered.

At $1,999.99 with a kit lens ($1,699.99 body-only), the Alpha 7 is not only one of the smallest and lightest full-frame cameras out there, but one of the cheapest as well. It’s an impressive achievement for Sony, which says it’s spent years inventing the tools and parts it needed to make this camera possible. The 7R is much more of a specialist’s camera, but it offers remarkable resolution and versatility for something its size. Both are coming in December, along with plenty of accessories, and both are coming for the big, clunky, ugly DSLRs we’re all too tired of carrying around. Whether or not Sony’s really achieved the seemingly impossible, we’ll know soon, but the company’s drawn a line in the sand, saying loudly that great cameras don't have to be big anymore.