Share All sharing options for: Microsoft's photo and movie making apps revealed ahead of Windows 8.1 release

While Windows 8.1 adds a lot of features and improvements across the OS, the built-in apps include some of the biggest changes. Microsoft is detailing a few of the more creative ones ahead of the Windows 8.1 release tomorrow. The photos app in Windows 8 included Facebook and Flickr integration, but the Windows 8.1 version drops that in lieu of some improvements to editing. You can now select auto fix for a selection of different corrections, and there’s also manual cropping, red-eye removal, retouch, and other basic contrast and brightness settings. One of the more interesting features is color enhance that lets you pick an area of a photo to brighten up or darken areas of photos.

Alongside the photos improvements, Windows 8.1 also includes some camera changes. The new built-in camera app is accessible through a swipe on the lockscreen and it now includes the ability to take photos during video capture. There’s also a panorama feature that works by using Microsoft’s Photosynth technology to stitch together multiple images. Once the panorama is complete it will sync to SkyDrive and is viewable on the web. The Windows 8.1 Camera app also supports a new Photo Loop feature. Essentially, it’s identical to BlackBerry 10's photo rewind feature. It requires new hardware, and Surface 2 is the only tablet we know that includes the feature, but it will start to instantly take pictures from the moment the Camera app is loaded. While you won't see it taking pictures, it acts as a temporary buffer so you can use a radial menu to rewind a photo where someone may have blinked or looked away. 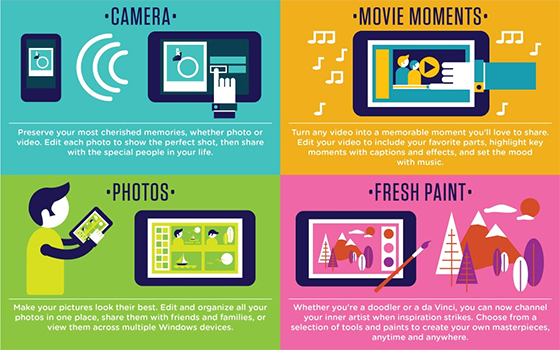 The software maker has remained fairly quiet over its plans for a new Movie Moments application, but it’s now ready to detail its capabilities. As the name implies, it’s what Microsoft labels a "simple app" designed for Windows 8.1 users to quickly share video stories with effects, music, and short captions. It’s a far cry from Windows Movie Maker that originally debuted in Windows XP SP2 and saw updates and improvements right up until Windows 8. While Windows Movie Maker includes a lot of capabilities for simple video editing, Movie Moments for Windows 8.1 is an even more simplified version with little customization available. It’s a start, but Microsoft will need to build in more of its Movie Maker features before it can truly ignore its more powerful desktop offering.

Finally, Microsoft is also overhauling its Fresh Paint drawing app for Windows 8.1 with improved stylus pressure support and rendering of watercolors. The updated app goes live in the Windows Store on October 18th alongside the optional Movie Moments application. All of the built-in app changes will be available as soon as the Windows 8.1 update is installed when it starts rolling out tomorrow.