The story behind the looper's delight

It wasn’t so long ago that electronic music production was the work of pioneers. Giorgio Moroder and Don Lewis synthesized monstrous Moog mainframes in the disco era; Roger Linn kick-started hip-hop in 1988 with the Akai MPC60. But making music on a computer was a dream just beginning to come true in the ‘90s — boxes were getting faster and cheaper, but music software remained torturously buggy. Roland, a Japanese company with a long history of democratizing production by mass-producing and lowering the cost of new tech, saw an opportunity. The electronic music world lacked a product that efficiently combined sampling, performance, effects, and recording into one box — and so, in 1998, that world received the SP-808 Sampling Groovebox.

Resurrecting the fabled 808 nomenclature 17 years after the iconic TR-808 drum machine was a sign that Roland was deeply serious about this box on a cultural level. Korg’s Triton workstation was a studio standard at the time, but its 61-key form factor and $3,500 price tag kept it out of reach for a new generation of producers more obsessed with collage than composition. Over time producers began to use the SP-808 as a “character box” — that meant that even when it did things it wasn’t advertised to, like subtly compressing samples, people liked how it sounded. Soon the biggest names in the business were name-checking it in interviews: Daft Punk and The Prodigy were relying on it onstage and in the studio, and Throbbing Gristle’s Chris Carter was impressed enough to write a review of it back in ‘98.

One box to rule them all

One box to rule them all

With a 32-minute maximum sample time, professional four-track mixing, and built-in 100MB Iomega Zip drive, the SP-808 rivaled the functionality of the high-end computer-based digital audio workstations of the day. Sixteen sample pads mimicked Akai’s proven formula, and the high-quality effects could be controlled by simply waving your hands in the air above the built-in D-beam controller. The SP-808 Sampling Groovebox — along with smaller Roland classics like the SP-404 sampler and MC-303 Groovebox — was the first machine to bring a professional performative flair at an enthusiast’s price of around $1,000.

Although the SP-808’s functionality could easily be emulated in software, there was no replacement for a machine that you could just turn on and start using with little fear of crashing; one with knobs, sliders, and buttons that weren’t on a mouse or keyboard. Anyone who tinkered with “remix” software in those dialup days spent as much time configuring as they did producing: it was a time of mismatched MIDI drivers running on lilliputian hard drives in beige Pentium boxes. Then-ubiquitous Zip disks provided an easy way for producers to collaborate before the rise of easy file sharing, and as a result the SP-808 became a staple of the experimental and mixtape communities, just as Ableton and Max / MSP did in the 2000s. Stretching one’s mind a little bit, it’s not hard to see Roland’s roughhewn time-stretching algorithms as a direct precursor to the core of Ableton’s mass appeal today— artists like J. Dilla, Panda Bear, and Four Tet used them to mold loops and create some of their most iconic albums.

While the SP-808’s internal Zip drive made it something of a legend (drives with that much space were usually only accessibly via SCSI), the high-capacity disks also proved to be its Achilles’ heel. Iomega products were as finicky as they were useful; as a result many Sampling Grooveboxes were laid to waste permanently as their read / write heads deteriorated, leaving years of un-rendered productions to rot in a gray digital limbo for eternity.

Like many of rock ‘n’ roll’s biggest icons, the SP-808 often died far too young, but maybe that’s exactly why it became such a legend. Electronic production has now been democratized to the point of saturation: anyone who bought a Mac after 2005 has gotten Garageband for free, the bulk of popular music is now produced on a laptop, and the SP-808 has been sent down to the basement where amateurs and enthusiasts alike keep it alive out of a rarified passion for nostalgia and simplicity.

Fan pages at Looper’s Delight are time capsules of a very specific culture riddled with protips and undocumented features producers used to squeeze every last drop of productivity out of their machines. Indeed, there are lots of Zip drives and disks that didn’t fail: SP-FORUMS is a still-kinda-active community of users still churning out productions 15 years after the SP-808’s introduction, or just as often giving resurrection tips to users who scored one this year on eBay.

A pond of possibilities

A pond of possibilities

The SP-808 represents a pinnacle of closed production ecosystems — if you were dedicated enough to internalize the 200-page manual, you became an omnipotent craftsman. While Ableton’s infinitely customizable landscape has allowed music to blossom in unprecedented directions, it doesn’t mean the music is any better than it used to be — the software tools of 2013 make it difficult to achieve mastery of any one electronic instrument. Roland’s iconic workstation provided a set of parameters that was ideal for a burgeoning creative mind — more than enough to get you started, capable enough to see your project through to the end — but nothing more. It’s a design paradigm that’s far too rare these days, heavy enough to induce nostalgia in the most jaded of producers — and to keep a piece of hardware alive for years after it should have been buried. 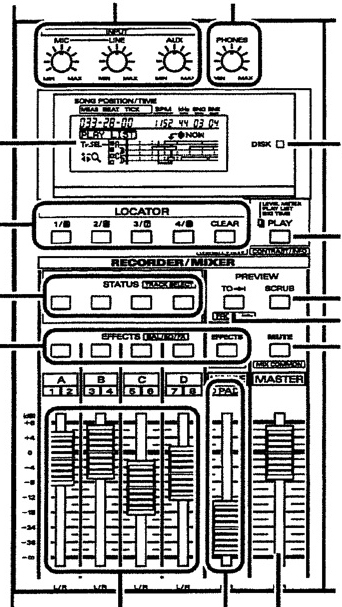 The Classics: cultural artifacts for the new millennium