Brooklyn-based artist Jingyao Guo has teamed up with Chicago's Object Design League (ODLCO) to create a series of illustrations depicting some of the world's most vibrant open air markets. Jingyao's "Marketplace Posters" collection was produced as part of a Kickstarter project launched last week, and includes detailed, stylized renderings of the Raohe Night Market in Taipei, the Muara Kuin Floating Market in Indonesia, and Tokyo's Tsukiji Fish Market (pictured above).

The China-born Jingyao takes about a month to create each work, after conducting thorough research on each locale. The idea, she says, is to capture the bustling energy and unique culture of each market in graphic detail.

"As designers, we are interested in the way that all the minute details of an environment add up to create a rich and lively atmosphere," reads a statement on the project's page. "We wanted to produce a series of drawings that would represent this, and invite others in as observers." 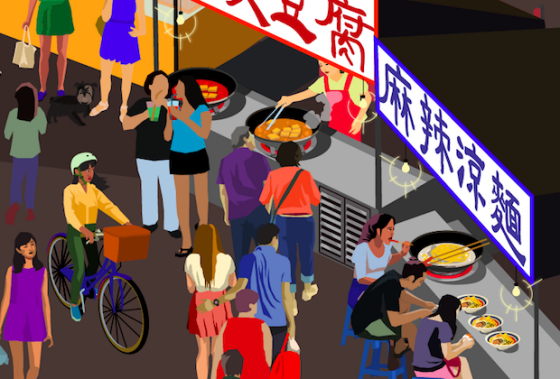 ODLCO 's Lisa Smith tells Core77 that the project dates back to 2010, when she and fellow co-founder Caroline Linder travelled to the night markets of Taiwan. They initially planned to create illustrations for children, but soon realized that they would appeal to a much broader demographic.

"We like the 'Where's Waldo' feel of each scene, and wanted to encourage kids to appreciate observation as a way of 'reading' an environment," Smith said. "As the drawings evolved, however, it was clear that they appealed to all age groups, so we aren't being specific about who or where it's for, and let the viewers decide."

"We hope that people will look at markets with new eyes."

And although some may see hidden meaning in selling illustrated markets on a digital marketplace, Smith says the works weren't designed as a commentary on contemporary e-commerce or crowdfunding.

"We weren't so much interested in making a comment about the internet as we were intent on celebrating the vibrancy and humanity of public markets," she explains. "We hope that people who encounter these prints will look at markets with new eyes, and see them as highly creative, entrepreneurial, and important social spaces for all members of society."

You can buy your own poster and vote on Jingyao's next marketplace by supporting the project on Kickstarter.