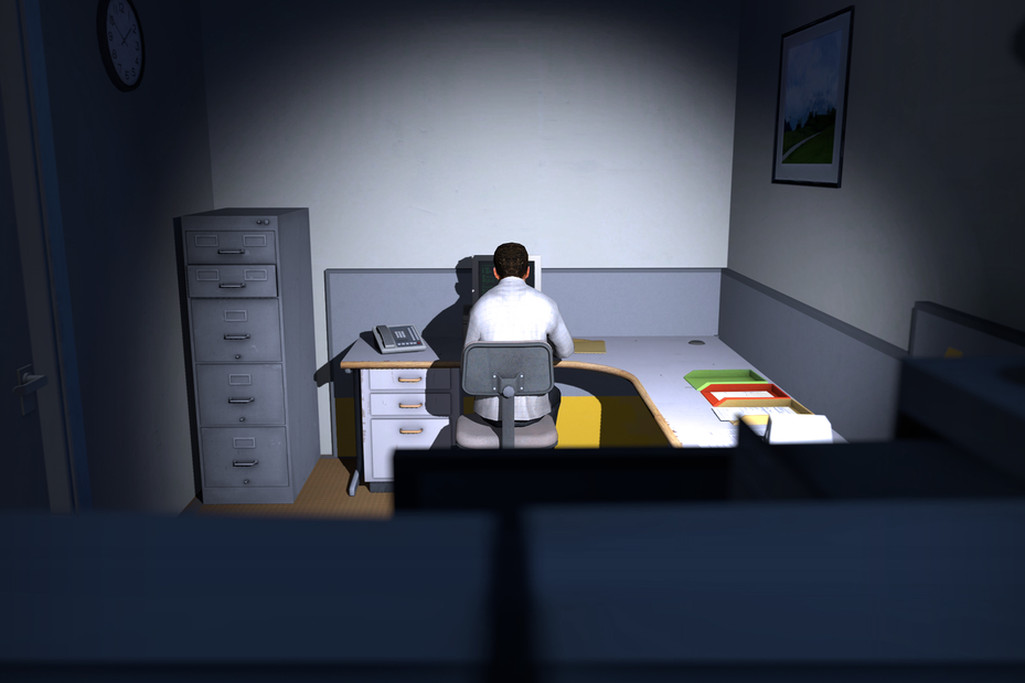 Video games, as a rule, depend heavily on a trick that TV Tropes calls the “Voice with an Internet Connection.” The Voice is the comm link in your head, giving you missions and explaining your world: think Halo’s Cortana, Deus Ex’s many operatives, or even Portal’s GLaDOS. By turns helpful, officious, and hostile, the Voice will tell you what to do and how to feel about it, even when it suddenly starts trying to kill you. But what if you could disobey the Voice? Could you make your own destiny? This is the entire premise of The Stanley Parable.

Here’s how The Stanley Parable starts: Stanley is Employee 427, a mindless, button-pressing drone in an office. One day, his boss stops telling him which buttons to press, and Stanley decides to go investigate. How do we know this? Because we’ve been told by a friendly, matter-of-fact narrator with an authoritative British accent. Stanley makes his way down the hall, where two doors are open. The narrator says that Stanley takes the left one. Which door does he take? And where does that door lead? 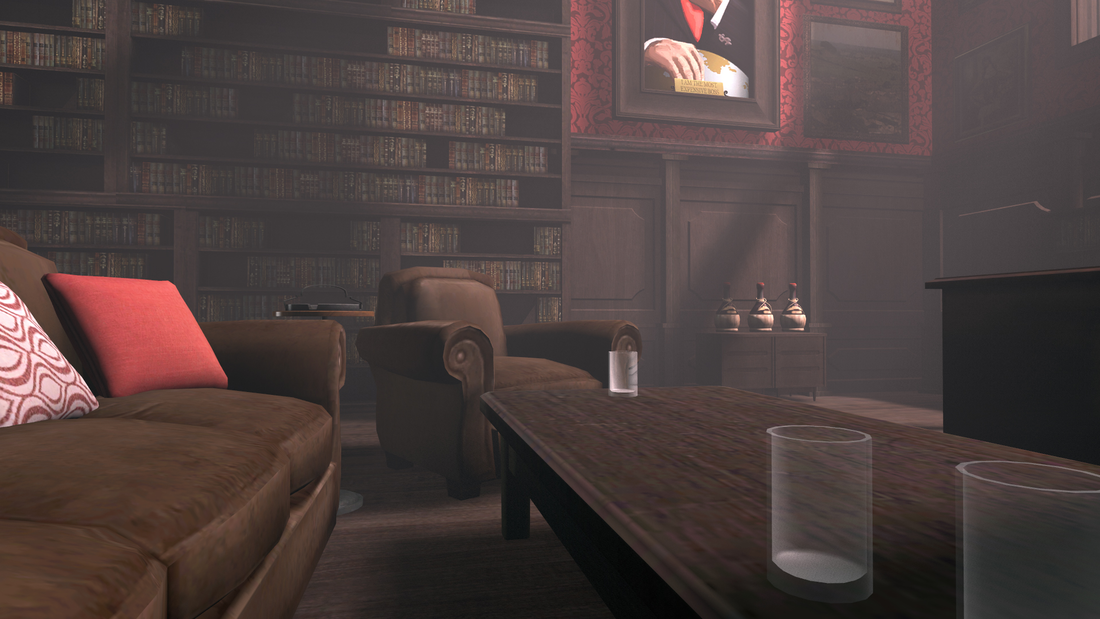 It’s best to go into the game with as few preconceptions as possible — there aren’t spoilers per se in the rest of this piece, but figuring out how things work is a substantial reward. The Stanley Parable is a kind of self-aware choose-your-own-adventure story, conveyed as an exploration game. In 2011, it was released as a humble Half-Life 2 mod, made by a 22-year-old aspiring game designer named Davey Wreden. Technically primitive and made from sometimes awkwardly repurposed textures and models, it received sudden and effusive acclaim; a year later, Wreden announced an "HD Remix" that was eventually approved as a standalone game on Steam Greenlight. Now, while much of the game’s plot remains intact, protagonist Stanley is no longer played by one of Half-Life 2’s background characters, and new art lets Wreden play his original ideas out to ever more surreal conclusions.

On its face, The Stanley Parable is a satire of interactive storytelling, a way to tease out the irony of asking people to make real decisions when their every move is controlled by a piece of software. A "demo" (which includes no actual footage from the game) gives players a wall full of identical buttons that will "convey the meaning of choice and the impact of the decisions you make." Immediately after starting the full game, you’ll walk past a series of locked doors and blinking computer screens, which you might be tempted to check for clues or helpful items. But the narrator knows what you’re up to. "Stanley went around touching every single little thing in the office," he’ll say. "But it didn't make a single difference, nor did it advance the story in any way." Try to get an apparently easy achievement, and he’ll harangue you for only caring about rewards.

At one point, I spent several minutes hiding in a broom closet

Much of the game’s fun, however, is that it’s just as much of a joke on the sort of games that satirize games for their linearity and false choices. Subverting and calling attention to video game tropes and inevitabilities is practically its own subgenre now — the whole point of Portal, after all, is that listening to the voice on the PA system will eventually get you killed. The Stanley Parable’s narrator chides you for trying to be cleverer than him or for refusing to play along, all with an irreverent wink at how silly the whole thing is. It’s a veritable petri dish of David Cage speeches, BioShock Infinite dissections, and essays about "ludonarrative dissonance." If it treated its gags about lazy win conditions or the tyranny of choice as grand revelations, they’d be trite. But as a series of offhand nods, they’re hilarious. At one point, I spent several minutes hiding in a broom closet, resisting the narrator’s attempts to coax me out. When I restarted the level, the closet was boarded up. 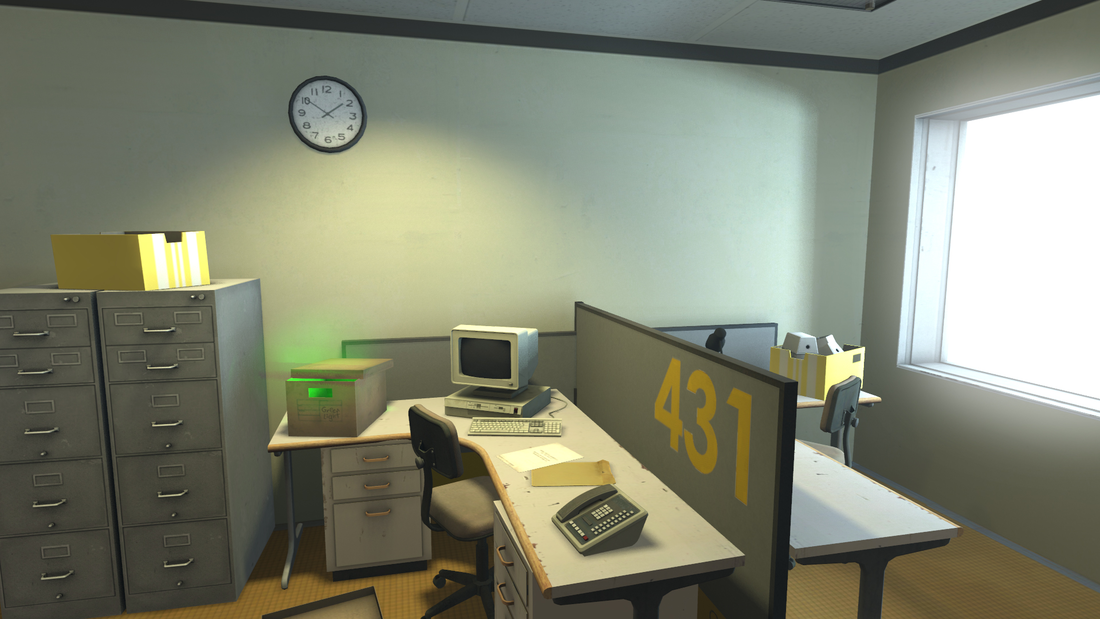 The real brilliance of The Stanley Parable is that it perhaps inadvertently shows you exactly why basic linear storytelling tropes exist in the first place: because sometimes, they work. Wreden has laid out a series of fantastic little plotlines that range from ironic thrillers to Brazil-esque flights of fancy, and the fun is feeling around the edges of where the game can take you. Behind the extremely permeable fourth wall is a story about two people who need each other terribly but don’t want to admit it. Depending on where you go, your narrator can be Stanley’s best friend, his worst enemy, his befuddled companion, or a self-conscious version of the UI feature he essentially is. Knowing that none of your actions are really free, that you’ll be resetting the game over and over, just makes things sadder or weirder or funnier.

Every path has been laid out for you, every choice already made

No matter how complex it is, you obviously can’t make your own destiny in a game like this. Every path has been laid out for you, every choice already made, and the game makes sure you know it. But that’s nothing to be ashamed of. The Stanley Parable is the rare narrative game that actively rejects "immersing" you; if anything, it drives you out of character constantly. You’re not inhabiting Stanley, you’re guiding a pawn through a bizarre metatextual landscape where a surprising number of things can happen. Even the game’s art is joyfully schizophrenic, calling out its artificiality: one room might barely be textured at all, another might be full of props from Half-Life 2.

The funny thing is, I’m fairly sure that The Stanley Parable can and will be broken. Valve’s Source engine, upon which the game is based, is notorious for its glitches and its dedicated speedrunners, and nothing is a more tempting target than a game predicated on messing with your sense of place and reality. In the end, that’s how you get the kind of agency we talk about wanting in video games — you refuse to play by the rules altogether. The agency you get by playing The Stanley Parable normally, though, is the sort you get in any kind of media. It’s the freedom to come away with your own ideas and your own interpretations, and to return for a replay as often as you want.