Evolution revolution: how one skull may unite the early human family tree

Evolution revolution: how one skull may unite the early human family tree

At a site in Dmanisi, Georgia, researchers have been finding the bones and tools of early human ancestors for years. Now, however, an unearthed skull is posing something of a problem. The top of its head is relatively small, resembling a humanlike species known as Homo habilis; but its jaw is fairly large, more closely resembling another species, Homo erectus. Naturally, a single skull can only come from a single species, but this one seems to be telling two separate stories.

Researchers may otherwise have said they were separate species

In a paper published today in Science, researchers led by the Georgian National Museum describe how the approximately 1.8-million-year-old skull has begun raising questions about current classifications of these earlier humanlike species. "The brain case is very small, unexpectedly small," says Marcia Ponce de León, a co-author of the paper, during a call describing the findings. "At the same time we have the face. It is quite large, and the jaws are quite massive, and the teeth are big and large."

Had the two skull pieces been found at separate excavation sites, researchers almost certainly would have said that they came from two separate species. But instead, researchers are proposing something controversial: that many of our ancient ancestors are actually part of one single species, rather than a variety of them as they've long been classified. 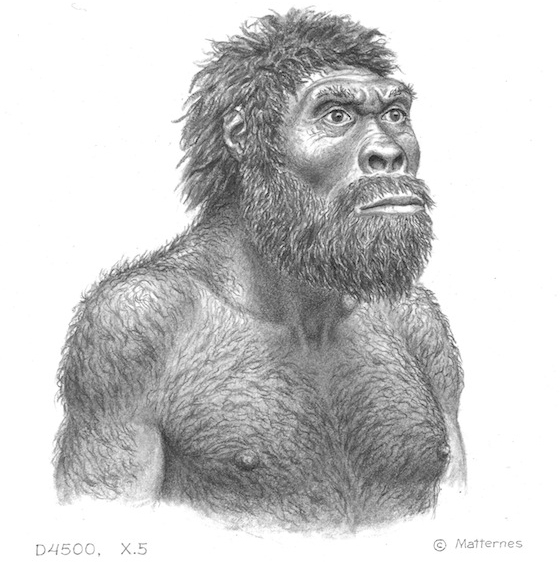 Illustration of how an individual with this skull may have appeared (Image: courtesy of J.H. Matternes).

Ponce de León says that the skull contains a "strange combination of features," one that hasn't been seen before in bones from human ancestors of that period. The research team has taken to colloquially calling those early inhabitants "early Homo," as an easy means of lumping all of the potential species together. After comparing the size of the new skull pieces to the size of other early Homo fossils, researchers recognized that the differentiation in shape and size — a major reason they've been considered separate species — wasn't actually so great after all. In fact, they were no farther apart than variations between modern humans.

"We can really look into and quantify the variation."

"Dmanisi is the first site where we can really look into and quantify the variation," Christoph Zollikofer, a co-author on the paper, said during the call. "We are pretty sure that the variation that we see in Dmanisi is within the species."

Combining those early members of the Homo genus into one single species isn't a done deal yet though. This is only one fossil — albeit one of the best ever found — and not every expert in the field will be convinced. Another of the paper's co-authors, Philip Rightmire, tells Science that the conclusion has already set off something of a "bomb" in their field, ostensibly causing a schism between those who agree with the findings and those who aren't sold on the idea of a singular species just yet.

As for the dig site in Dmanisi, there could be more to come. "[Dmanisi] is really a place that every paleoanthropologist dreams of," Ponce de León says. The paper's lead author, David Lordkipanidze, describes it as a medieval city set on a hilltop. Excavations at the location first uncovered animal bones, and since, at least five ancient skulls. Another 50,000 square meters have yet to be excavated. "[Dmanisi] may be a time capsule which preserves a system around 1.8 million years ago," Lordkipanidze says. "I can say for sure that we have still a lot to discover."