"I plan on doing them until I run out of juice."

Scott Campbell delights in finding the most interesting moments in film, and then documenting them in his distinct water color style. His "Great Showdowns" series has covered a huge range of cinematic conflicts — from the Ghostbusters up against a ghost librarian, to Air Bud versus a basketball — and no matter how dark the situation might be, he always manages to infuse it with a sense of cheer. In addition to that, he's worked as an art director on games like Psychonauts and Brutal Legend, and illustrated a zombie book for kids. He's just released the second book filled with "Great Showdowns," and we took the opportunity to talk to Campbell about the series, how it influences the way he watches movies, and whether it will ever end.

The series started as a single exhibit, but how did it grow into the massive collection you've created so far? Did you ever think you'd go on to fill two books with these paintings?

I just like painting these little guys. I had no idea i would be making so many of them. If I had looked into the future as I painted those first ten showdowns, I would have been quite surprised that my interest and motivation was still intact. I had fantasized about collecting them together into a book to put into people's hands, but I did not expect to keep going with it after the first book. But honestly, I love doing them so much. I am happy that they seem to make other people happy.

"I am happy that they seem to make other people happy."

What's your process like for coming up with a new showdown? How long does it usually take?

I usually create the showdowns in waves of like 20 or so in a conveyor belt fashion. I make lists and lists of films I want to do and then do extensive research on all of them to gather images and try to decide on good moments to do. I love researching movies I haven't seen since I was a child. Some movies I watch again and some I just watch clips to remind me of my favorite moments. Once I have gathered enough images, I start sketching the characters. That is my favorite part; trying to simplify the faces. It's like a puzzle to solve and I love it so much. I scan all these doodles into the computer, compose the showdowns, print them, and then paint them. One showdown from start to finish would take about three to four hours. But I do them conveyor belt style: I paint all the skin first, then all the pants, then all the shirts, that sort of thing. 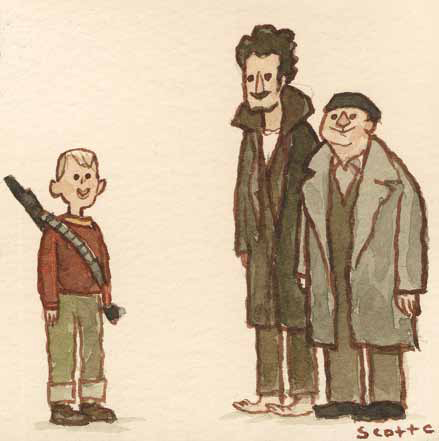 Has doing the series changed how you watch movies? Are you constantly looking for potential showdowns?

Heh, sometimes. I try to not let those thoughts into my mind as I enjoy a film. It is usually better to watch the whole thing and then think back to the favorite moments that stick with you.

"That tangled ball of lights was quite a monster."

In some movies the showdown is much less obvious than in others. Is it a challenge to spot things like, say, Clark Griswold versus Christmas lights?

Well, sometimes films have a whole bunch of potentially great showdowns and I just need to pick my favorite or the most iconic. The battle that Clark Griswold had with those lights was epic; that tangled ball of lights was quite a monster. But the showdowns aren't always bad intentioned showdowns, sometimes they contain great feelings of love, as we see in the Notebook showdown with Gosling and McAdams looking at each other in the rain. And other times it's a showdown like Goldblum and the teleporter machine in The Fly where he is about to try the thing out himself and ruin his life. It is all about tension in the moment. That tension could come from absolutely anything. Some of my favorite films still sit un-showdowned because I cannot settle on a good moment. That can be frustrating. 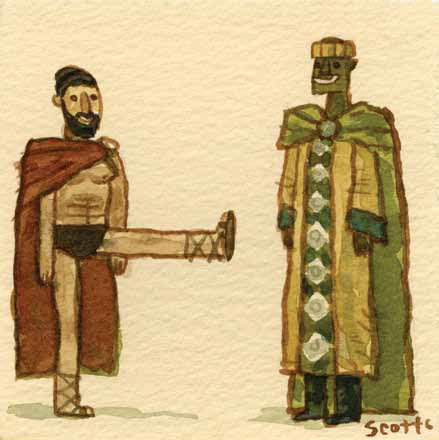 The series is inherently about conflict, but everyone (including the inanimate objects) looks so happy. Why is that?

I suppose that brings them all onto the same level no matter how terrifying or sad the conflict in the film actually is. I like when people are feeling pleased. They all look pleased as if they were all enjoying each other's company at a party and reminiscing on great moments together.

Unbelievably great. The most flattering thing in the world is to have the actual creator of the film enjoy the showdown from their movie. It is the approval I always hope might happen, because then I could share with them the love I have for the films that they create. Mutual love. 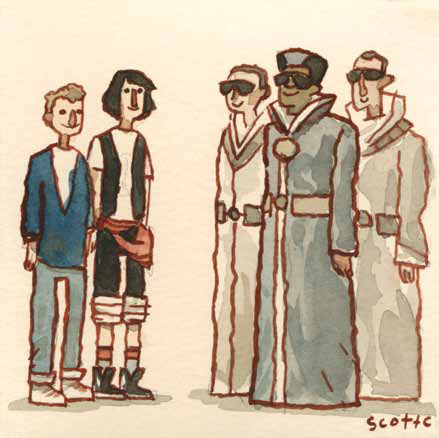 You've been quite prolific so far. Do you plan on doing these forever?

I plan on doing them until I run out of juice. We will see how long that is. It can't last forever, but if it does, I will pass the task on to my grandkids.

You've worked in the video game industry as well, could you see doing a run of gaming showdowns?

I have done a series of 8-bit showdowns for a show in LA called I Am 8-Bit. There was the ape versus the building from Rampage, Frogger versus a log, Mario versus Donkey Kong, a Tetris piece versus a Tetris mass. I would love to do more though. I like to do special runs like that when the opportunity arises. I did a whole series of Lost showdowns for an exhibit as well. TV shows have so many potential showdowns that is daunting for my mind, but could be sweet.