I’ve come to a sobering conclusion about myself: I’m not a very active person. Despite maintaining a gym membership and only the best intentions, I still prefer to read, watch TV, and play games. This is precisely why I’ve never invested in a fitness-tracking gadget — if I’m not moving that much, what is there to really track? I’ve had no interest in the current crop of fitness trackers on the market, many of which are either dumb wristbands or require being clipped to my waist.

But the new Fitbit Force promises to be more than that. I do wear a watch, and I’ve even grown to like my Pebble watch for its notification capabilities. The Force can purportedly replace my wristwatch and my Pebble, all the while keeping track of my activity (or lack thereof) throughout the day. Is this the fitness tracker to finally get me out of a chair more often?

A bracelet, a watch

The $129 Force is really an evolution of Fitbit’s existing products: the company essentially took its belt-clip One tracker and married it to the wrist-worn Flex. It looks like the Flex, but the Force has an OLED display and the ability to track how many flights of stairs you climb throughout the day. Fitbit uses that new display to show you the time, step count, calories burned, distance traveled, flights of stairs climbed, "active minutes" (which Fitbit defines as periods of intense activity such as jogging or cardio), and upcoming alarms. You can even start a basic stopwatch by long pressing the lone button on the Force.

The wristband on the Force is flexible rubber and it’s virtually identical to the Flex except that it’s only available in black or slate, as opposed to the rainbow of colors the Flex comes in. When it’s dry, it doesn’t really snag on your skin or arm hair that much, but it can be pretty uncomfortable when it gets wet with sweat or water. The clasp is in the same design Fitbit used on the Flex, and even after a week I still find it quite difficult to actually attach the Force to my wrist. Fitbit argues that the focus of the clasp design was primarily to make it as flat as possible, so it doesn’t bang against your laptop while you type or get snagged on things as you walk by them. That part is true: I didn’t have to take the Force off while typing on my computer, as I frequently do with wristwatches. The Force is splash- and water-resistant (I had no issues wearing it in the shower, even if it’s not really recommended), so I didn’t have to take it off all that often in general. Unless I wanted to dry it off, of course.

Turning on the display just to check the time is tedious 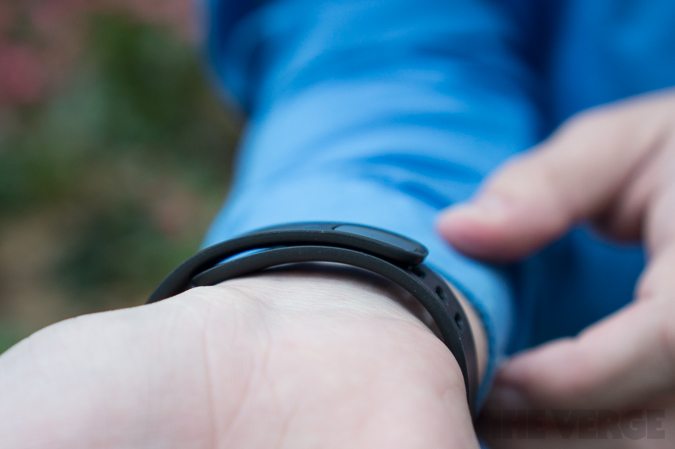 With a built-in display, the Force could theoretically replace a wristwatch or smartwatch. But since you have to press the Force’s button just to see the time on the tiny display, it’s a pretty crappy watch. It’s not much of a smartwatch, either: Fitbit promises you can get incoming call notifications on your wrist that show the caller’s number or name as long as you’re using an iOS 7 device. I wasn’t able to get these to work at all during my time with the Force (Fitbit promises that a software update is coming in the next few weeks to properly enable the feature), so it didn’t function as a smartwatch for me in any sense; it’s merely a small wristwatch that I can’t just glance at. If Fitbit figures out how to extend the functionality of the Force’s notifications to email and text messages, it could be far more practical, though the tiny OLED display is only ever going to be but so useful. My Pebble and its robust support for notifications from my smartphone will stay firmly placed on my other wrist, making me look like some kind of advertisement for battery-powered wrist accessories.

Fitbit claims that the battery inside the Force is good for 7 to 10 days between charges, and my experience lines right up with that. When you do need to charge (Fitbit will send you an email and push notification when you do, which is awesome), you have to use Fitbit’s proprietary, small, easy-to-lose USB cable that comes in the package. At least I didn’t have to disassemble the Force to charge it; it’s just one piece now, not a tracker shoved in a case like the Flex. 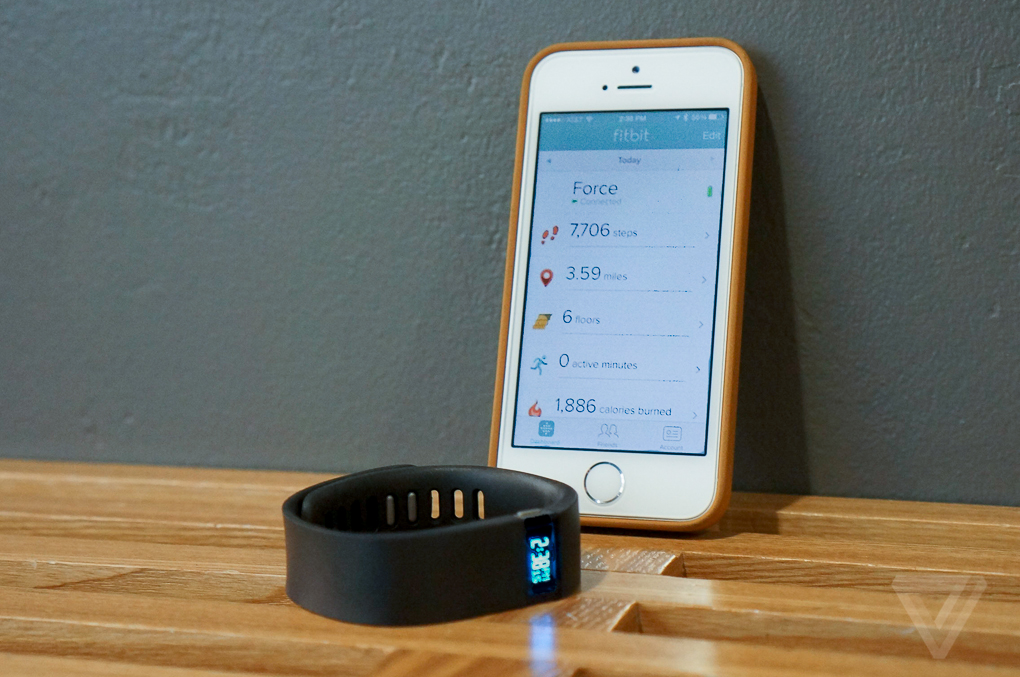 To go along with the Force, Fitbit cleaned up and simplified its apps for iOS and Android. I paired the Force with an iPhone 5S, and was able to sync it wirelessly over Bluetooth to keep track of my steps and activity throughout the day. (The Force can wirelessly pair with iOS devices and the Samsung Galaxy S3, S4, Note II, and Note 10.1; everyone else has to use the included USB dongle to sync it with their computer before the app will update.) Steps counted, distance traveled, estimated calories burned, and stairs climbed all synced without issue. But for some reason, the app never reconciled Fitbit’s nebulous "active minutes" category with what the Force reported on its display. There’s a place for it in the app, but the data never transferred.

It’s great seeing your progress throughout the day (unless it’s 6:00PM and you need another 6,000 steps to meet your goal), and the Force’s display makes it easier to check in on your status whenever you want. The first couple of days I wore the Force, I was hyper-aware of my progress, but after a while, the novelty wore off. I’d just end up at the end of the day seeing what I did or didn’t do, without really getting any insight as to why I made or missed my goals or any incentive to do better the next day — it’s the same issue that plagues all fitness trackers on the market. 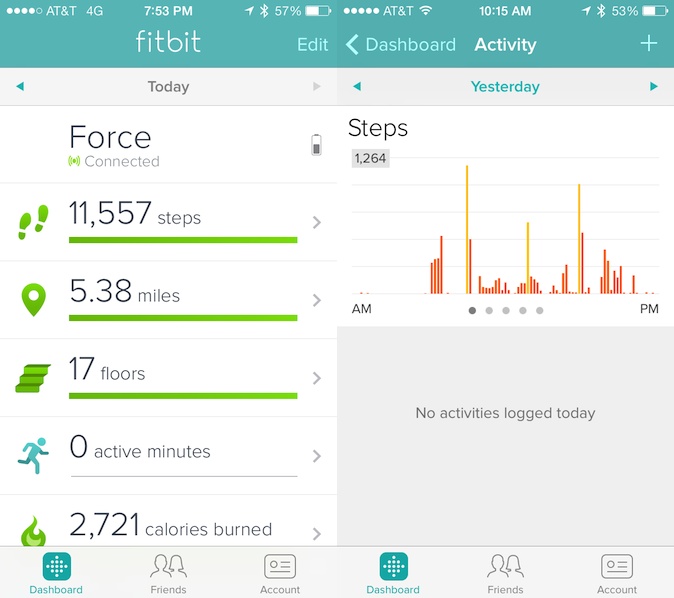 Tracking what you eat is still not automated enough

You can also use Fitbit to track what you eat, though it has nothing to do with the Force itself. And recording everything that you eat or drink throughout the day is a pain, requiring you to constantly log everything you consume or else live with incomplete, irrelevant data. Compounding the issue is the fact that while Fitbit’s database of foods is extensive for purchased or processed meals, tracking every ingredient of your mom’s famous meatloaf becomes beyond tedious. At the end of the day, the truth is I really don’t want to admit how many Double Stuf Oreos I eat in a single sitting — where’s the joy in that?

Like the Flex, the Force tracks your sleep if you wear it overnight, but now if you forget to tell it you’re going to sleep you can log your slumber the next morning. The app then goes back and lays in the data it recorded while you were tossing and turning throughout the night. But the same problem remains as before: without knowing more about personal habits and daily life, the Force can only tell me how many hours I slept and how many times I was restless. It doesn’t know that when I woke up for 30 minutes at 2:00AM, it was to rock my toddler back to sleep. It doesn’t tell me why on Tuesday night I slept for nearly eight continuous hours, but on Wednesday, I tossed and turned and only got four hours of sleep. I have to figure that out for myself, and who am I to diagnose my erratic sleeping? Knowing is half the battle, but I need the other half too.

By all accounts, the Force is the best fitness tracker yet. It takes the convenience of the Flex and adds the information density of the One. It’s also a much more complete system than competitors such as Nike’s Fuelband. But it’s still just one component of the still-unrealized dream: a fully integrated personal health system that doesn’t require so much work on your part. A perfect system would satisfy three things: get me off of my butt, measure what I do, and then inform me on how to do it better. Nike’s Fuelband (especially the new Fuelband SE) does the first two pretty well, but we have yet to see a system that really nails the third component. 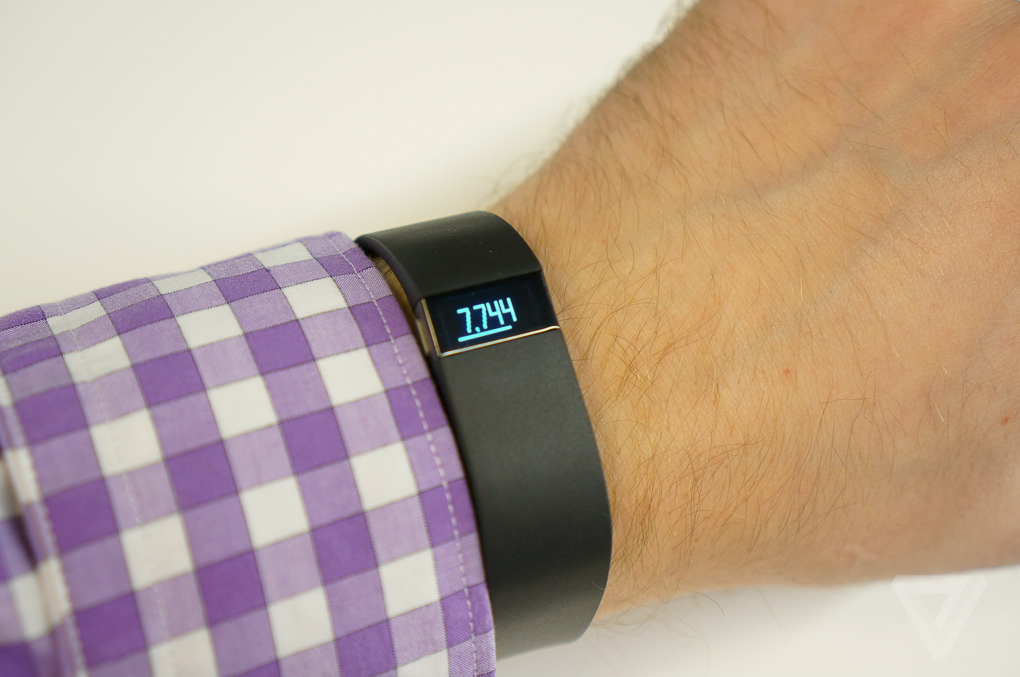 An improved Fitbit, but not a revolution

If you’re debating between the Force and the Flex, get the Force. Its display and single-unit design alone are worth the extra $30. But if you’re like me, and haven’t really bought into the whole quantified self movement yet, the Force isn’t going to be the one that sells you. It doesn’t replace a smartwatch, it’s a poor replacement for a normal watch, and it doesn’t really do anything different from other trackers we’ve seen before.

If the Force had an always-on display, it might at least be a passable watch, and functioning notifications for more than just incoming calls could turn it into a useful, if rudimentary, smartwatch. But what I really want is the Force’s smart tracking built into the smartwatch I already own — or even better, in a traditional watch that looks nice on my wrist. The Force is the best of the fitness-tracking bunch right now, and there’s plenty of potential in combining smartwatch with fitness bracelet — but it’s a revolutionary idea more than a revolutionary product.

Perhaps next time you’ll win me over, Fitbit. If you need me, I’ll be on the couch.