South Korea's largest cinema chain will soon be showing 270-degree movies. Theater operator CJ CGV has developed technology — called ScreenX — that projects footage onto both of a theater's side walls as well as its main screen. The technique provides a panoramic experience, but demands that film-makers take the two new 'screens' into account when shooting their movies.

The first film to be shown utilizing ScreenX technology is the appropriately titled The X, a half-hour spy thriller directed by Kim Jee-Woon that premiered at the recent Busan International Film Festival. Unlike the similar-in-practice Microsoft IllumiRoom, ScreenX's 270-degree effect is achieved by shooting with three cameras simultaneously, crew and equipment must be carefully placed to avoid appearing in frame. The Wall Street Journal reports that to shoot The X, more than 30 people had to line up directly behind the camera, and lights had to be installed on overhead cranes. Yonhap News says Jee-Woon described the experience as "like hell and a nightmare."

The Wall Street Journal says The X makes particular use of the two side walls — painted gray to better reflect the footage — using examples of a car chase tracked in hyper-wide panorama, and a phone-call with its participants split by a central screen. The side screens aren't always used during a ScreenX-enabled showing: viewers will spend most of their time looking ahead as they would a normal film, with the new technology adding in extra peripheral details. Outfitting a theater with the technology will reportedly cost between 150 and 200 million won ($139,300 and $185,800), but CJ CGV already has 40 ScreenX screens set up in 22 cinemas around the country. 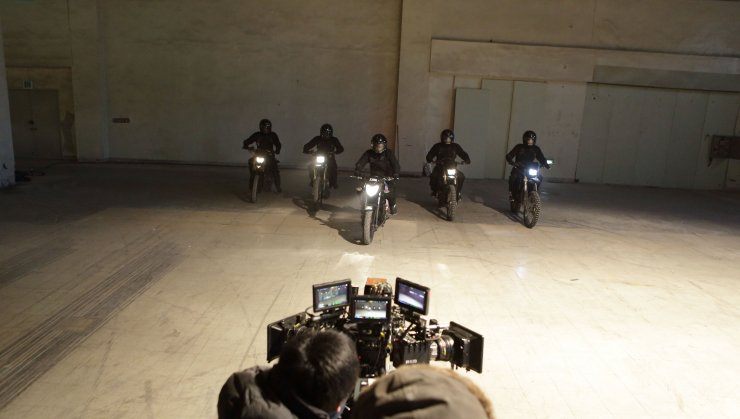 Kim Jee Woon described filming 'The X' for ScreenX as "like hell and a nightmare."

There's no word on whether ScreenX technology will be used outside of South Korea. It's a difficult sell, as in addition to forcing film-makers to line up behind a camera, audience placement may be a limiting factor in viewing: those stuck on the edge or front of the theater will have to constantly crane their necks to follow the action. But as with IMAX, it may well be visually impressive enough to warrant the inconvenience.