The city of San Francisco this week launched a social network designed to help citizens prepare for, and respond to, natural disasters. The website, called SF72, allows users to create emergency plans, stock up on supplies, and, in case of an actual emergency, receive real-time updates on evacuation routes. The San Francisco Department of Emergency Management launched SF72 on Thursday, and plans to release an accompanying smartphone app in the future.

The idea, according to site developer IDEO, was to make emergency preparedness less scary and more social.

"We found through research and user testing that people were intimidated by the types of preparedness information available because it tended to be overwhelming," Kate Lydon, IDEO's public sector lead, said in an interview with TechHive. "People don’t respond to information that's fear-based. SF72 is designed around the idea that being prepared is based on social connection. That’s something we can do in our everyday lives." 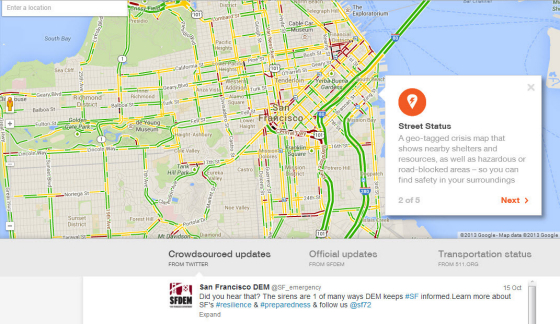 SF72 pulls in user information from Facebook, Twitter, and Airbnb, allowing citizens to automatically update their statuses and search for accommodations when an earthquake or other disaster strikes. The site also helps users plan evacuations, identify places to find supplies, and receive instant updates from emergency response teams. Perhaps most valuable is its "Emergency Mode" hub, which includes a real-time Google Maps visualization of open evacuation routes and nearby shelters.

The developers of SF72 say the site is already optimized for mobile viewing, and although a smartphone app is in the pipeline, they hope the site will encourage users to share resources and knowledge across real-life social networks, as well.