Ghost Food: an art exhibit shows how we might eat after global warming

What would you do in a world without cod, chocolate, or peanut butter?

Share All sharing options for: Ghost Food: an art exhibit shows how we might eat after global warming

In 2011, the runner peanut — used in peanut butter — had its worst harvest in three decades after a summer of severe heat and drought. Not long after, researchers suggested that the North Sea cod’s slow recovery from chronic overfishing is due partly to warmer water that unbalanced the ecosystem. And rising temperatures worldwide threaten the cacao tree that gives us chocolate. With a climate change "tipping point" on the horizon, the foods we take for granted now may no longer grow in the same regions or with the same methods in 50 or 100 years. And some may become luxury goods or all but disappear as we know them today.

What might that future look like? Well, it could be something like the Ghost Food truck, which made its way from Philadelphia to New York in the first half of October. Ghost Food is an exhibit by artists Miriam Simun and Miriam Songster, a food truck that gives us a taste of how people could eat when global warming has changed our environment. Its menu offers a curious collection of substitutes for potentially endangered foods: artificial recreations of chocolate, cod, and peanut butter. "Each of the three foods that we serve have their own very particular stories … We did three foods from three different climates to bring that out — rain forests, grasslands, and oceans are all facing their own changes," says Simun. "We’re offering free samples of the future."

The Ghost Food truck evokes a lab, or a cryonics facility

Almost entirely monochrome, the Ghost Food truck evokes a lab or a cryonics facility more than a halal cart, with white-clad attendants who speak infrequently in a soothing, mechanical tone. Order your food, and it comes to you in a tiny package on a square white tray. The actual ingredients are all meant to be resistant to climate change: the "chocolate milk" is just sweetened milk, and the "peanut butter" in a sample of PB&J is a trade secret. By themselves, though, none of the samples would really taste like their namesakes. The final ingredient is a 3D-printed mask that lets you smell what you’re supposed to be eating. 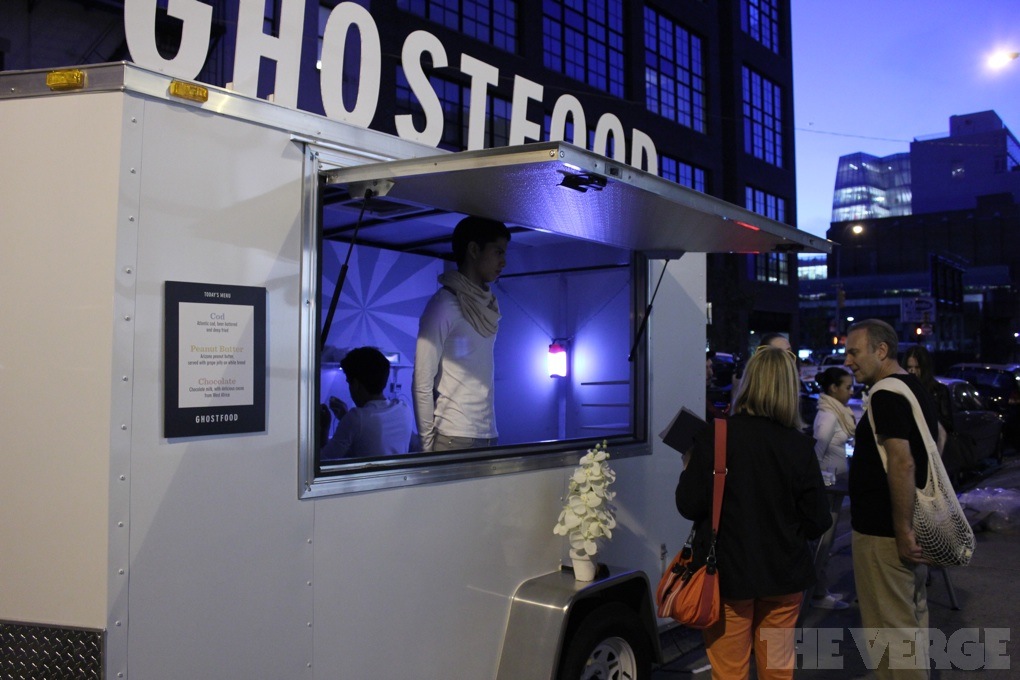 Scent’s role in taste is well established, and processed-food makers spend millions figuring out how to create compounds that simulate fruits or build entirely new flavors. GhostFood isn’t too different. When you get your sample, it comes with something that looks a bit like a medical breathing tube. Fit it around your face, and it holds a small bulb soaked in synthetic chocolate, cod, or peanut butter scent right next to your nose. Once you finish eating, the attendant pops off the bulb and takes it away, cleaning the frame for the next guest.

When I got to the counter, I ordered the cod. One of the attendants fitted the mask over my face and bent the scent bulb inward, ostensibly filling my nose with the scent of succulent endangered fish. In reality, the scent was certainly fishy, but underlying it all was an astringent tang, like a piece of plastic. The substrate, held in a piece of foil and heated for my enjoyment, was convincingly designed to look like battered fish, or at least a battered fish stick. In reality, it was vegetable protein and algae.

I pushed the bud a little closer to my nose and bit in. On its own, the protein tasted like soggy tofu tempura — not great, but it’s hard to screw up deep-frying. With the scent bud, though, it became a strange parody of real fish. The texture was all wrong, chewy rather than flaky, but the scent was unmistakably aquatic. Combining the two required some mental work that ultimately made the experience more nauseating than delicious. It’s not fish, something kept whispering. It’s chemically fish-flavored algae. Beside me, someone else described the chocolate milk as being palatable but far too sweet.

Which is, in some ways, exactly the point. If somebody handed me a microwave pizza with fake meat, I’d probably take it in stride. I certainly spent enough of my childhood eating terrible low-cocoa "chocolate." But this was different. Part of it is that I’m generally ambivalent of seafood, but I’m also not used to having the artificiality of processed food showcased so starkly, with the taste literally decoupled from the calories and nutrients you’re consuming. Songster says with some more work, you could get closer to a convincing taste than she and Simun did, but the focus here is on creating an aesthetic experience that connects our memories of the real food with its engineered substitute. 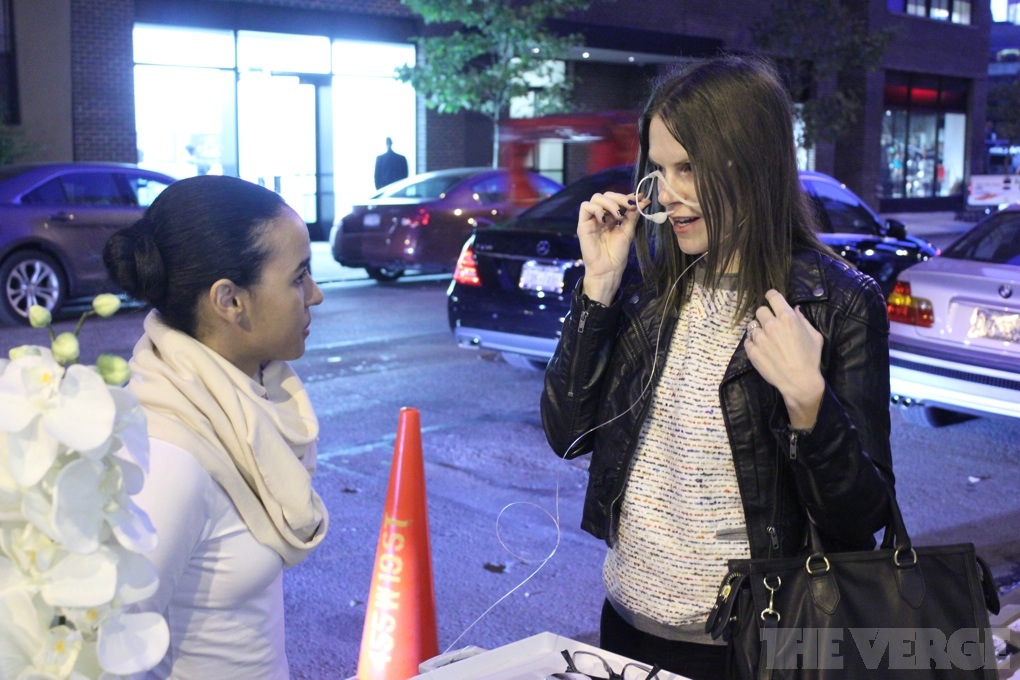 Songster’s previous work has focused on making scents — for one exhibit, she recreated a balm from Cleopatra’s perfume laboratory — while Simun is planning a whole series of exhibits on how we eat. "Human Cheese," a previous work, turned breast milk into artisanal cheese that was then displayed in the "Lady Cheese Shop." Simun says this installation started with the idea of the mask, which came to her when she started learning about scent and taste: she describes the trick of making a jelly bean mostly flavorless by holding your nose. Which of the three simulated foods is her favorite? "I think the peanut butter scent is the best," she says, "although the experience maybe doesn’t work as well as the chocolate one. The scent of peanut butter is such an incredible thing."

"The scent of peanut butter is such an incredible thing."

Chocolate, cod, and peanut butter aren’t the only things that could become harder to get. The three foods were chosen to represent a mix of environments and flavors. But honey, coffee, apples, and other common foods could also degrade in quality or become rarer. If one area becomes too warm for growing, "people say ‘Oh, okay, we’ll just move them north,'" says Simun. "There’s generations of families that have been farming this stuff and have all this knowledge, and they can’t just move 20 degrees north." Of course, it's possible to adapt, and we usually do. One of the best-known examples of this is the Gros Michel banana, which was once shipped to grocery stores around the world. But in the early 20th century, a fungus began to invade plantations, destroying harvests. By 1960, the Gros Michel was nearly extinct.

Today, we’re still eating lots of bananas. The Gros Michel was replaced by the Cavendish, the only sweet banana most of us have ever tried. Was it an even swap, though? The Gros Michel is almost universally considered better (it’s described in one essay as "more banana-y"), even if that view is colored by nostalgia. The future probably won’t see us give up fish for tofu or apples for some kind of artificially scented slurry. But whatever we get will be, at the very least, a complicated trade-off.