After a quarterly earnings report that beat Wall Street's expectations for the first time in three quarters, Google's stock price hit $1,000 for the first time today. Investors were impressed by the company's continued growth in its core search advertising business, although advertisers are paying less for individual clicks than they used to. By the end of the year Google is expected to own 33 percent of the global online advertising business, up from 31 percent last year, Bloomberg reported. With today's 13 percent stock surge, Google is now the world's third-most valuable company, after Apple and ExxonMobil. 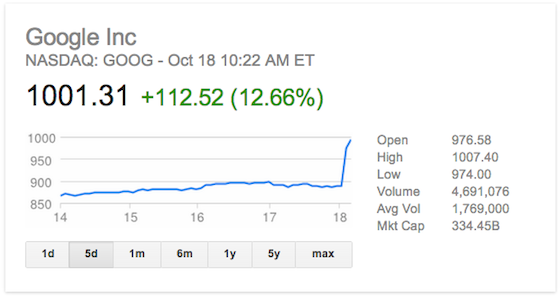