A city in flames: inside Detroit's war on arson

Share All sharing options for: A city in flames: inside Detroit's war on arson

For eight long years, the firefighters of Highland Park, Michigan, worked out of a warehouse. There was no red-bricked facade, no lanky Dalmatian. No freshly washed engines gleaming in the sun. No second-floor fire pole to descend in the dead of night to wailing sirens. Whatever idealized vision you have of firefighting, Highland Park is not it. Instead, picture a hulking, boxy building on the edge of an industrial park about six miles north of downtown Detroit. A small metal sign points the way, light blue with “Fire Dept” stenciled in all-caps white, the previous tenant’s name erased with spray paint. There’s a parking lot strewn with detritus (including a vagabond shopping cart) and beyond that train tracks and Interstate 75, the eight-lane highway that cuts through the heart of Detroit.

The Highland Park fire department opened nearly a century ago, in 1917, to serve the booming city. It once employed 84 firefighters; today it’s less than half that. Yet they answer, on average, 1,000 runs a year, including 150-200 structure fires. They fight car fires, respond to accidents, and answer calls about hazardous materials. They have one working ladder truck.

"We do stuff kind of old-schoolish, because that’s what we have: old-school, crap equipment," says Scott Ziegler, a first-generation fireman who’s worked in Highland Park for four years. When he arrived, he slept in a tent; the company’s previous station had been condemned because the local government couldn’t afford repairs. It now stands empty and overgrown, roof collapsed in a spill of bricks and wood — just another abandoned building among the tens of thousands littering the area. In an almost inevitable turn, the Highland Park firefighters were called out to extinguish a fire at their own former headquarters.

Highland Park is three square miles surrounded by the city of Detroit, and shares the litany of woes affecting the area. In 1910, Henry Ford opened the world’s largest automobile manufacturing plant there, which boosted the economy and led to record population growth. Chrysler was founded there 15 years later, and the growing city became a landmark of car production. 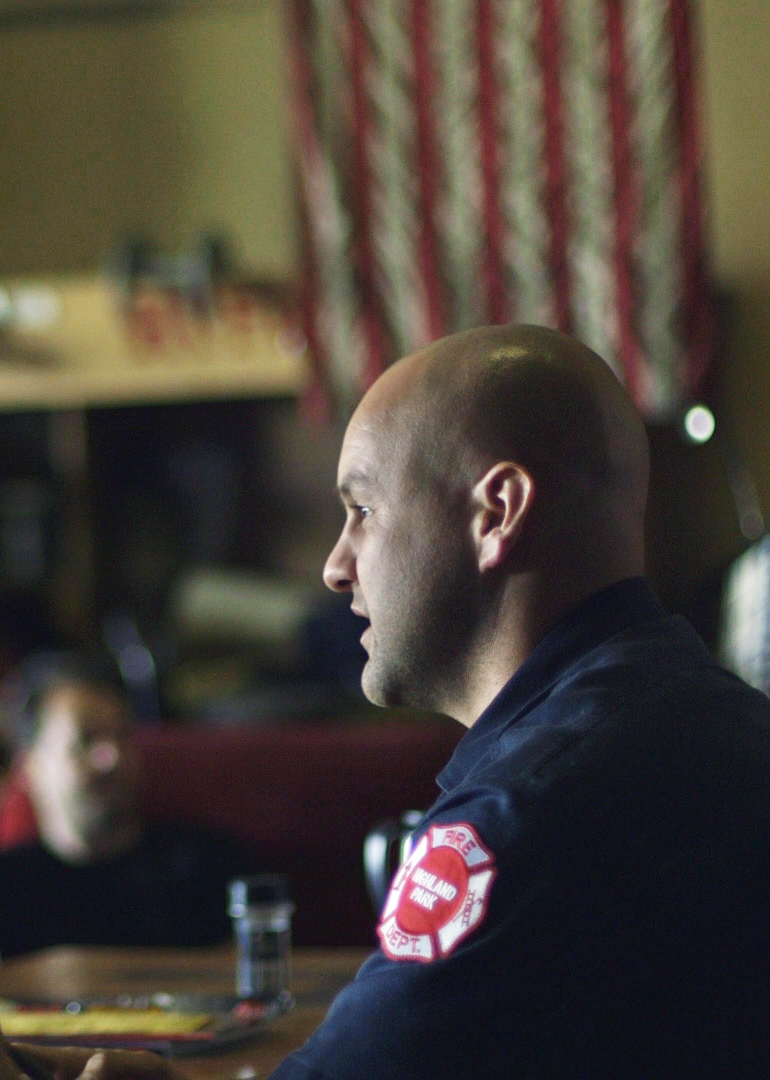 "We’ve pulled up to stuff we just couldn’t control."

But the population peaked in the 1940s at over 50,000 people. The car companies moved on, as did many of the inhabitants. The city’s tax base evaporated, leading to decades of financial trouble. Michigan appointed an emergency manager for the troubled municipality in 2000; that manager was fired in 2009, accused of embezzling from the city, and eventually ordered to repay $264,000. Meanwhile, two-thirds of the streetlights were removed to cut costs. Today the area is stricken with unemployment, with more than a third of its people living below the poverty line. Highland Park’s population stands at just 12,000 people.

"We’ve still got a lot of nice neighborhoods here. A lot of hard-working people. Even in some of the neighborhoods where there’s maybe only a couple of houses left, there are people who’ve lived there for 40, 50 years," Ziegler says. Once called to the site of three burning houses, all vacant, firefighters found a neighbor who’d lived there for 46 years. He pleaded with them not to let his house burn down. "I would never in a million years say, ‘I promise you we won’t let your house burn down,’ but those are the words that came out of my mouth," Ziegler says. But they saved the house.

People don’t understand aggressively fighting fire in abandoned buildings, Ziegler says, even other firefighters. "The reason is you’re two feet away from someone’s whole life. And if you don’t go in and do it, quickly and efficiently, you’re going to end up burning a whole block down," he says, "And it’s happened here. We’ve pulled up to stuff we just couldn’t control." With a short-staffed crew, limited equipment, and little help from surrounding fire companies (often equally overwhelmed, particularly in Detroit), Highland Park’s firefighters see themselves as on the front lines with every blaze. If they don’t stop it, an entire street might burn; Ziegler’s seen seven houses go up at once.

"Just because someone’s not paying their taxes doesn’t make it vacant," says Paul Bates, who's fought fires for 14 years. "I think we’ve found more people living in vacant houses than we have in houses that are supposed to be occupied." One supposedly vacant house contained five children; when rescuers arrived and kicked in the door, the entire upper floor was in flames. Most of the fires in Highland Park are arsons — people burning for kicks, or for insurance money, or to clear abandoned property. But not all. Cold winters and poverty combine, resulting in accidental fires caused by squatters burning to stay warm. Or simply people trying to live as best they can behind boarded-up windows, often with no electricity, heat, or water.

"And then you get people saying, ‘Well, just let the whole city burn down. Let the houses burn,’" Ziegler says. "That’s not the answer. You can’t just let things burn down." He began recording Highland Park’s fires with a helmet-mounted camera, then posting the videos on YouTube. He cut together a year’s worth of fires; the video soon went viral, appearing on Gawker and The Huffington Post. Asked to appear on local news, he was hesitant; he didn’t want to seem like a showboat. Instead, he wanted people to see what he and his company saw: buildings engulfed in flames, a single engine trying valiantly to quell the fire. He and another firefighter leaping out to extinguish a car fire. A pair of them going running into an inferno, nothing but smoke and flame visible before them. As obvious as it may seem, he wanted viewers to realize how difficult the job is. And how important.

In late August, the Highland Park fire department finally moved out of its temporary station, where its members had eaten in a trailer and slept in plywood barracks they’d made themselves. With federal American Recovery and Reinvestment Act funds, the city built a new fire hall directly across from the old one, still broken and charred. Firefighters were so excited with the new facility, some of them stayed over even when not on the clock. Eight years later, the new building is one thing that might make their jobs a little easier.