As if you needed any more confirmation of the grip Breaking Bad held on pop culture right up to its finale. Spotify tells Business Insider that global streams of Badfinger's song "Baby Blue," which was featured in the show's climactic episode, rose by 9000 percent after the credits rolled — as illustrated by the following chart. 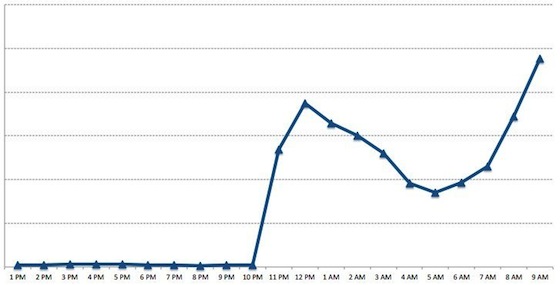 Apparently it's not just streaming fans that want to hear the song again. Billboard reports that the song could receive close to a 3,000 percent sales boost this week, and it's said to have sold just under 5,000 downloads last night.

"Baby Blue" was first heard on the British rock band's album Straight Up, which came out on the Beatles' Apple Records in 1971. Although it's a conventional love song on the surface, its lyrical references to "the special love I have for you, my baby blue" will have particular resonance with Breaking Bad fans.