Abandoned house given a facade-melting facelift

Share All sharing options for: Abandoned house given a facade-melting facelift

From the Knees of my Nose to the Belly of my Toes is an art installation created by Alex Chinneck. The pristine brickwork on the front of this three-storey house sloughs away, revealing a dirty, destroyed home within.

The installation was created in the British seaside town of Margate, around the shell of an abandoned property. For £100,000GBP ($162,208), Chinneck had a team remove the house's original white front, and replace it with slowly slumping brickwork constructed using prefabricated panels. The building's interior remains untouched, and just visible on the top floor. 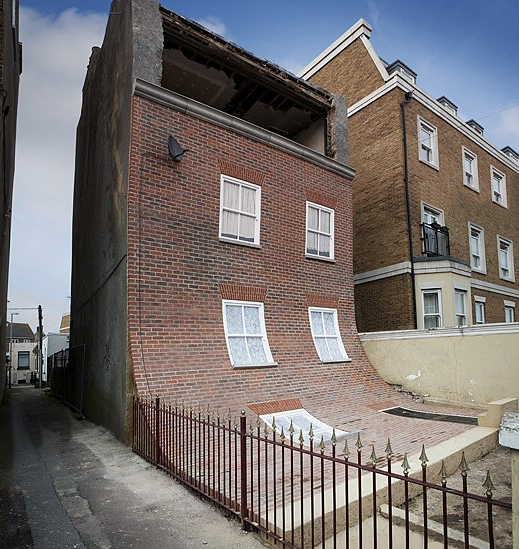 Chinneck explained to Dezeen that he started to like the concept of "exposing the truth and notion of superficiality," but that he "didn't go into the project with that idea." He was originally inspired to create From the Knees of my Nose to the Belly of my Toes to appeal to "the simple pleasures of humor, illusion, and theater" to be "enjoyed by any onlooker."

The house itself is found in Margate's Cliftonville area, a place Chinneck describes as having "social issues," and "high rates of crime." He was drawn to the place "because it's an area where the culture hasn't reached," and he feels "public art too often forgets its responsibility to the public." The work was paid for by the UK's Arts Council after Chinneck spent twelve months asking for funding. Once he had the money, the work was completed in a short six weeks.

Many of the artist's other works deal with dilapidation and dereliction, including a set of 312 similarly smashed warehouse windows. He told Dezeen that he likes "taking a subject that's dark [...] and delivering a playful experience within that context."