Lake of doom: deadly waterway calcifies any animal that dares to dive in

Lake of doom: deadly waterway calcifies any animal that dares to dive in

Sometimes, truth is indeed more terrifying than fiction. In what could easily make for prime horror film fodder, a renowned photographer has captured stunning images of wildlife calcified by the caustic waters of a deadly Tanzanian lake.

Nick Brandt, well-known for his photography of East Africa's natural landscape, came across Tanzania's Lake Natron during his travels. And as his ensuing photos demonstrate, this isn't any ordinary body of water: the lake is named for a mineral (natron, often referred to as sodium carbonate decahydrate) whose presence gives Lake Natron a remarkably high alkaline content. With a pH that ranges from 9 to 10.5, and water temperatures that can reach 140 degrees Fahrenheit, the lake is so inhospitable that it kills most wildlife that wind up in its depths. 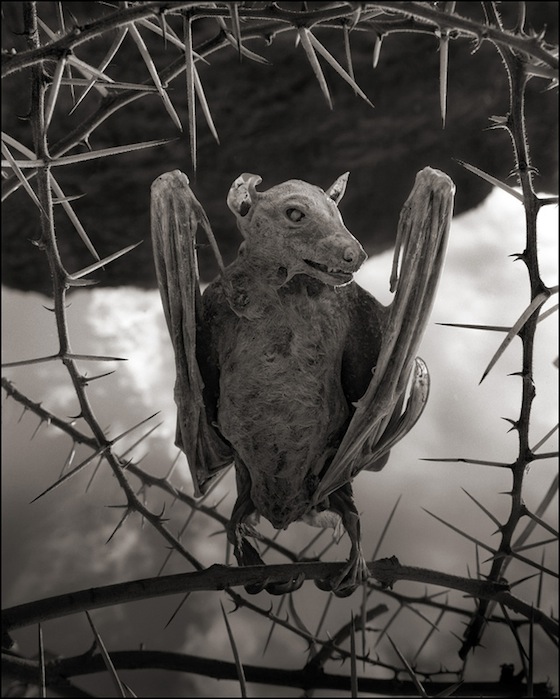 But perhaps not in the way you'd expect. The lake's unique chemical composition calcifies living creatures like birds or bats, yielding impeccably preserved specimens whose washed up bodies remain dotted along the lake's environs. According toThe New Scientist, Brandt stumbled upon the calcified creatures in these very positions, collected them, and then placed their bodies on branches to create his eerie portraits.

Despite its hostile composition, Lake Natron does support some life. The alkaline tilapia species of fish can withstand the lake's harsh conditions, while a species known as Lesser Flamingoes often breed or nest along Lake Natron's less caustic shoreline.