Thanks to personal genomics companies like 23andMe, it's becoming quicker and easier for us to find out who we are. But will the same technology one day allow us to decide who our babies will be — before they're even born? That's the question raised by a newly issued patent, which grants 23andMe rights to a system that allows parents to pick and choose their children's traits prior to undergoing fertility treatment. 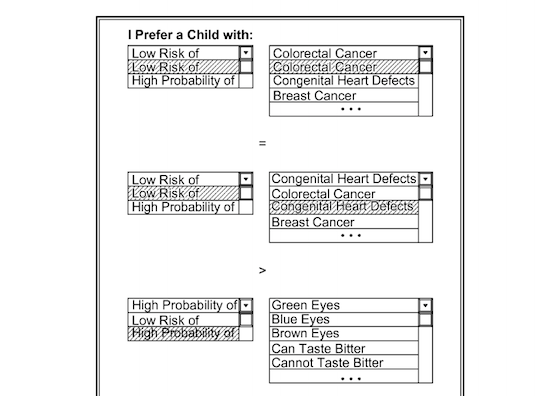 Since 2009, 23andMe has offered a service called the "Inheritance Calculator," which lets parents see the odds that their future child will inherit a selection of traits, from brown hair to lactose intolerance. This latest patent, which the company applied for in 2008, covers the technology that comprises the calculator. But it also goes several steps further, by describing a system that would allow parents to select their preferences for a host of traits, some of them medical ("I prefer a child with longest expected lifespan"), and others not so much ("I prefer a child with high probability of blue eyes").

Already illegal in Canada and the UK

The system, according to the patent, could be used to "[identify] a preferred donor among the plurality of donors," based on genetic information. A woman undergoing in vitro fertilization using a sperm donor, for example, could ask 23andMe to crunch numbers on her own genetic profile and those of various donors — and then recommend a donor who'd most likely yield a child with the traits she desires. Of course, genetic analysis to check for some serious inheritable diseases already occurs. But the kind of non-medical trait selection that 23andMe describes is extremely controversial, and already illegal in Canada and the UK.

There are no plans to actually implement the system

According to the company, however, they won't actually be implementing the system described by this patent. "At the time 23andMe filed the patent, there was consideration that the technology could have potential applications for fertility clinics," reads a post published today on the 23andMe blog. "The company never pursued the concepts discussed in the patent beyond our Family Traits Inheritance Calculator, nor do we have any plans to do so."

And even if they did, it might not yet yield the results some parents are looking for. The genetic foundations of traits like hair color or athleticism are markedly more complex than researchers had surmised several years ago — meaning that anyone trying to design a baby might be sorely disappointed with the end result.