The PicoBrew Zymatic is the Nespresso of beer brewing

Share All sharing options for: The PicoBrew Zymatic is the Nespresso of beer brewing

An 18-year Microsoft veteran has set out to reinvent homebrewing with the PicoBrew Zymatic, a table-top brewing machine that promises to simplify the process of making a batch of custom beer. Co-founder Bill Mitchell, who worked on PDAs, smartphones, automotive, and wearable computing" during his time at Microsoft, says on his proect's Kickstarter page that he got tired with the overly long process of homebrewing as well as the difficulty of repeating a beer recipe once you found one you liked. After a few years of prototyping, he's now put his PicoBrew Zymatic up on Kickstarter, and the project met its $150,000 funding goal in just one day.

The device itself looks somewhat like an oversized metal microwave that you can hook a five-gallon cornelius keg to — once you select a recipe and load the machine with the appropriate amount of grain and hops (and the keg with water), you can turn it on and walk away. In less than four hours, your keg will be filled with unfermented beer. From there, you just need to chill the keg, add yeast, and seal the keg to let it ferment. A week later, you just need to carbonate your beer and it's good to go. Obviously, the process still takes some time and patience, but the actual beer brewing appears a lot simpler and takes up far less space than conventional setups.

It's also a more repeatable process thanks to the web-side software that lets you find and share exact recipes designed specifically for the PicoBrew Zymatic. The custom "recipe crafter" lets you choose different beers by styles and get the specs needed for your brew, and users can share recipes they invent themselves. It also lets you translate more traditional beer recipes shared in the BeerXML standard into something you can use on the PicoBrew Zymatic. 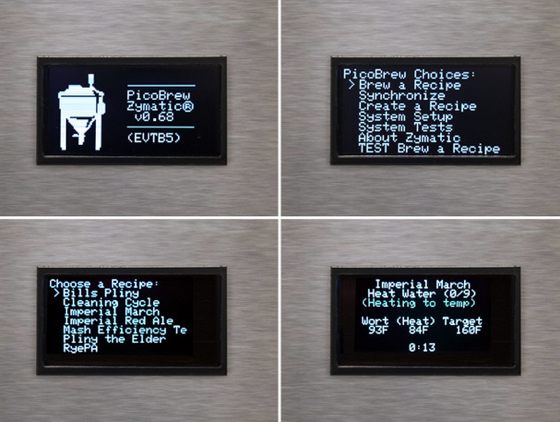 All in all, this seems like a pretty clever idea — Mitchell compares it to an espresso machine or breadmaker for beer — but of course the real test is how the beer tastes. Purists might scoff at this setup, but if you don't have a garage or basement for a full-on beer brewing system (or just don't have the time to muck around with it), the PicoBrew Zymatic might be worth a shot if it manages to make its way to production. Right now, you can reserve one from the first or second round of production with a $1,499 or $1,599 (all of the earlier, pilot-run machines are already reserved). It's a lot of money, but if you're willing to trust the that PicoBrew Zymatic can brew good beer, it might be worth your support on Kickstarter.