It's a Wednesday afternoon and armed policemen are strolling the streets of your neighborhood. Their bulking bulletproof vests and blue berets cut figures that are impossible to ignore. Less conspicuous are the tiny cameras nestled in their pockets, recording every sight and sound around them.

It may sound like the very definition of a "police state," but for people living in the crime-ridden favelas of Rio de Janeiro, this kind of scenario could soon be a reality — and perhaps even a welcomed one.

Over the past year, officers in parts of Rio have begun testing a tool called Smart Policing: an Android smartphone application designed to automatically record and store everything an officer hears and sees while on patrol. Developed under a partnership between Google Ideas and the Igarapé Institute, a Rio-based think tank, the app uploads encrypted video footage to a cloud server and, in case of a chase or emergency, can stream live feeds to police headquarters. A working prototype will be unveiled tomorrow at a New York event hosted by Google Ideas — Google's public policy think tank — and Rio looks to expand the pilot program to more favelas over the coming months.

"We see it as a triple win — for improving oversight over police, for enhancing police safety, and for improving police-community interactions," Robert Muggah, research director at Igarapé, tells The Verge.

The hope is that the constant presence of a camera will deter police from engaging in violence or corrupt behavior, but the program comes at a politically sensitive time for both Brazil and Google, whose think tank has a non-monetary partnership with Igarapé and offered technical consultation on the Smart Policing app. Violent protests and a recent high-profile murder allegedly carried out by Rio police have raised tensions across Brazil, while revelations about ongoing National Security Agency (NSA) surveillance programs have pressured Google to enhance protection of its users' data.

The Rio pilot is expected to continue through 2014, and Igarapé plans to launch similar programs in the slums of Nairobi and Cape Town, though it's not clear if or when the initiative will be adopted on a large scale. Equally unclear are details on how it would be regulated, something that has raised concerns among civil rights advocates.

"They have to have a clearly articulated strategy for how they’re going to use on-officer video and audio," says Scott Greenwood, a civil rights lawyer who has worked with police departments on similar programs in the US. Greenwood acknowledges that wearable cameras can greatly enhance officer oversight and provide "unimpeachable evidence" in cases where police conduct is brought into question, though he has reservations about the constant and automatic surveillance that the Smart Policing app would entail.

"If the idea is to just capture everything at all times, that's just broad surveillance," he says, "and that certainly hints at creeping ‘Big Brother.’"

Rio de Janeiro is home to some of the world's most dangerous slums. (Image credit: Wikimedia Commons)

The Smart Policing app was explicitly designed for Rio's Police Pacifying Units (UPPs), a special force created by the state military police in 2008 to provide a friendlier combination of law enforcement and social services for the city's favelas — many of which have long been under the control of gangs and drug lords. UPP officers have a permanent presence in select favelas, and are encouraged to spend the majority of their days interacting with citizens and patrolling communities on foot.

The UPP was created in an attempt to soften the image of Rio's military police force, which has a lurid history of violence and corruption. A 2009 report from Human Rights Watch found that police in Rio and Sao Paulo have killed more than 11,000 people in total since 2003, while an earlier BBC investigation estimated that thousands of Brazilians are killed by police every year.

Thus far, the UPPs have been largely well received, and homicide rates have declined in areas where they are stationed (the force currently controls around 200 favelas). They are seen as especially critical in securing the city ahead of next year's World Cup and the 2016 Summer Olympics, both of which will be hosted in Brazil. But the force’s image took a severe blow this month, when 10 UPP officers — including the unit’s commander — were arrested on charges of torturing and murdering 43-year-old favela resident Amarildo de Souza in July. The case proved to be a central driver behind the massive nationwide protests that erupted over the summer and continue today.

The Smart Policing program, according to Muggah, could help calm the relationship between UPPs and civilians by assuring each party that an eye in the sky is collecting objective evidence of their interactions. Under the program, officers would attach their smartphones to a clip on their chest pocket, and the app would activate as soon as they leave headquarters or their cars to patrol an area by foot. All audio and video data would be encrypted and uploaded to the cloud, and Muggah expects that it would only be accessible by a select few — presumably, police commanders. An interface at police headquarters, meanwhile, would allow commanders to track the location of their officers at all times, and could pull up live video feeds whenever an officer uses the app to send an emergency alert.

Muggah acknowledges that the app poses obvious privacy concerns, saying that if widely launched, it would have to be in tandem with an effective information campaign to "sensitize" both police and civilians. In its final form, the app will include face-blurring technology to protect the anonymity of passersby, though Muggah says residents who have encountered police testing the technology have so far been "benign or indifferent" to the project. It also remains to be determined whether the cloud infrastructure will be operated by the police or a private contractor.

A Google spokesperson declined an interview request from The Verge, sending instead the following statement: "Smartphones can be used to build stronger relationships between citizens and their government. The Igarapé Institute has explored this interaction in the favelas of Rio de Janeiro, and we've pitched in to design technology that helps." The California-based company struck a partnership with Igarapé in 2012, collaborating on a visualization of the global arms trade that was published last year. 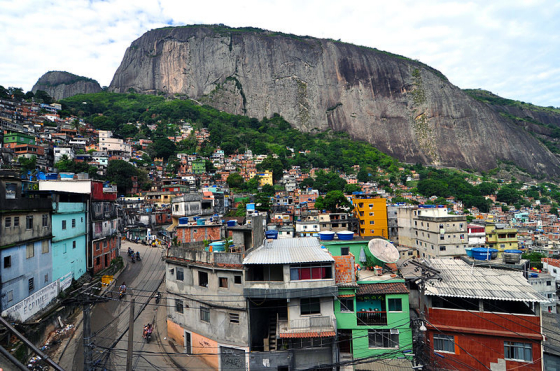 There is evidence to suggest that wearable cameras can improve officer-civilian relations and deter violence. After equipping officers with small cameras in their sunglasses last year, officials in Rialto, California saw steep declines in the number of complaints filed against police and instances of force used on civilians. The New York Police Department and other cities have since adopted similar measures.

But the Rio police force is widely regarded as among the most corrupt in Latin America, leading some to doubt whether the Smart Policing program can be fairly operated. Muggah says the program has "almost universal support" at the senior level of the police force, though a few lower level officers have expressed concern over the app intruding into their daily routines. Muggah realizes the importance of protecting "water cooler" conversations, but he says most officers believe the benefits outweigh potential drawbacks, pointing to the extra security and undoubtable evidence the app provides.

Still, there's nothing to stop a UPP officer from simply disabling the app altogether, which underscores the need for strong internal discipline within the unit's ranks. The program's fate will likely be determined by the leadership of the state military police, which will have final say on who can access and manage the data. Some find that troubling.

Ignacio Cano, PhD, a senior lecturer in social sciences at the State University of Rio de Janeiro, says Igarapé’s app could help increase "social control" and accountability, but it’s "not something that is going to change the landscape forever."

"Smart Policing is not a panacea."

When Amarildo disappeared in July, police surveillance cameras in the area reportedly broke down, fueling suspicions of foul play. Cano argues that there's nothing to stop UPP officers from distorting footage from the Smart Policing app in a similar way. The idea that technical safeguards or limited access could deter such tampering, he adds, is "wishful thinking".

It seems everyone can agree that the Smart Policing app at least has the potential to improve security in Rio, and if implemented effectively, it may even save lives. It certainly won't transform the city’s slums by itself, but Muggah says he has no illusions about the enormous challenges on the horizon.

"Smart Policing is not a panacea," he explains. "It is just one of many ways to help make people safer in places where security is in short supply."