Are stockpiles of ‘liquid gold’ a nourishing elixir, or a bacterial brew?

For new parents, there's no avoiding the adage that "breast is best." Major health agencies, including the World Health Organization and the American Academy of Pediatricians, have long concurred that breast milk is the ideal source of nutrition for infants — especially in the first six months of their lives. But what if that breast milk came from another woman? And what if you ordered it over the internet?

"My milk is gluten-free, dairy-free, and nut-free."

Since around 2005, the business of online breast milk exchange has boomed. Websites like Only The Breast and Milk Share offer thousands of listings, either from parents looking to sell excess breast milk or from those hoping to purchase some product. The posts read like a series of personal ads for human mammary fluids: broken into categories like "selling in bulk," "fat babies," and "special diet," each advertisement allows interested parties to learn about a seller's age, location, lifestyle, and maybe even peep a few pictures of their newborn. "Chubby 80th percentile baby willing to share!!" reads one listing, accompanied by a photo of a well-fed infant. Another touts that "my milk is gluten-free, dairy-free, and nut-free," while a third brags that "my husband and I are both ex pro-athletes for NBA and WNBA."

But according to the first-ever study examining the safety of online breast milk sales, the phenomenon isn't nearly as healthy as the alleged lifestyles of some mothers involved. A team out of Nationwide Children's Hospital, reporting in Pediatrics, conducted something of a sting operation to investigate the contents of 101 breast milk samples acquired from the web. They found that 74 percent of the milk failed to meet safety standards, with some samples containing fecal matter and others contaminated with salmonella or E.coli bacteria.

"A really, really sick baby on her hands."

"We're looking at risks as minor as a bout of diarrhea, to as severe as life-threatening illnesses like meningitis," says lead study author Sarah Keim. "Based on what we saw, a woman buying breast milk online could end up with a really, really sick baby on her hands." 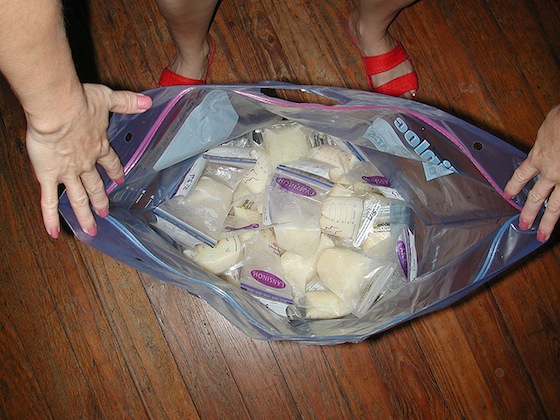 The online exchange of breast milk is ubiquitous, in part, because of how the substance is regulated: the Food and Drug Administration (FDA) doesn't restrict the sale or shipment of breast milk the same way the agency does other bodily secretions, like blood or semen. "Is it a food? Is it a body fluid? Is it a drug?" Keim says. "The FDA really doesn't know what to do with breast milk."

But in 2010, the FDA did take some action: the agency issued a stern statement condemning online breast milk transactions, warning that the practice could put infants in danger. "The donor is unlikely to have been adequately screened for infectious diseases or contamination risk," the agency noted. "It is not likely that the human milk bas been collected, processed, tested or stored in a way that reduces possible safety risks to the baby."

"The FDA really doesn't know what to do with breast milk."

At the time, FDA experts conveyed a desire for more research on the subject — and that's what Keim and her colleagues hope to provide. To conduct their study, they anonymously ordered milk from a sampling of women across the country (relying primarily on Only The Breast and Milk Share) and paid for the product — at an average of $1.47 an ounce — via PayPal. "We kept the process as anonymous and transactional as possible," Keim says, "because we wanted to get samples indicative of what the average woman would be receiving."

From there, the team analyzed the samples and compared them to unpasteurized milk provided by milk banks — nonprofit organizations that offer carefully tested and stored donated breast milk to premature or severely ill infants. "The difference between the two was astounding," Keim says. "We expected online breast milk to be worse, but honestly we were very surprised at what we found." Researchers also observed that a seller's purported lifestyle (such as organic eating or basketball skills) had no bearing on the cleanliness of her milk sample.

There's no way to confirm how samples became contaminated, but experts have a few theories. In large part, they suspect that women selling breast milk online aren't adequately trained in how to safely express milk (the process of using a pump or hand to extract the fluid), store it, or ship it. "A woman might not wash her hands or her breast, she may not sterilize pumping equipment or containers," says Kim Updegrove, president of the Human Milk Banking Association of North America. "There's just no way for an online buyer to guarantee that the milk they got was obtained safely."

The manner in which milk was shipped likely also contributed: 12 percent of samples took between three and six days to arrive, which Updegrove describes as "just amazingly bad," and 19 percent of shipments were mailed at room temperature. "That's just asking for bacteria," Updegrove notes. "These women might very well be compassionate, they might want to do a good thing, but the science doesn't lie."

‘They're getting it wrong' 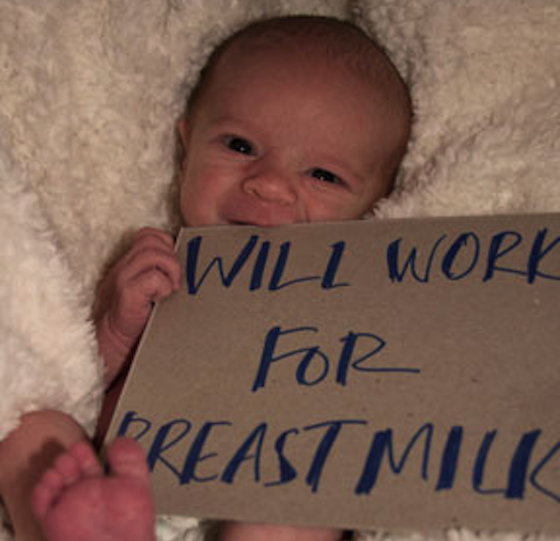 According to Emma Kwasnica, it does. Kwasnica is the founder of Human Milk 4 Human Babies, a global breast milk exchange that operates 130 groups in 52 countries. Rather than stand-alone websites, the groups use Facebook pages to post requests and advertisements for breast milk in specific geographic areas (their motto is ‘Eat local'). All of the milk, Kwasnica says, is donated rather than sold — and all of it is safe. "This is peer-to-peer, hyperlocal sharing facilitated by the internet," she says of the exchange. "This study wants to paint online milk services with one brush, but they're getting it wrong."

"The data just can't be extrapolated into anything meaningful."

To be clear, Kwasnica's network operates differently than those included in the study and she doesn't endorse buying or selling breast milk. But that doesn't mean she agrees with the research findings. In fact, Kwasnica suggests that flaws in the study's methodology led to botched results that don't necessarily reflect online breast milk sales. "The data just can't be extrapolated into anything meaningful," she says.

Most importantly, Kwasnica notes, anonymous transactions are often a red flag for women: those involved in the practice "are involved, concerned people, who would ask about the baby and the buyer, and expect to be asked for their own health information," she notes. "Women aren't stupid. They get a vague, anonymous note asking to buy some milk? They know something weird is going on."

Indeed, the study itself appears to corroborate Kwasnica's point. Of 495 requests for breast milk sent out, 191 women never replied. An additional 41 stopped responding after one message and 57 were eliminated because "they wanted to communicate verbally or inquired about an infant." Study authors also asked that milk be shipped to a UPS store — a request that Kwasnica says would strike women as disconcerting, and may have contributed to bacterial growth. "Who knows how long it was sitting there?" she says. "Real women ordering breast milk would have it sent where they can receive it and store it immediately."

"Look, there are a lot of breast milk fetishists out there."

Women who did contribute samples to the study, then, may reflect the most careless among the community — or assumed the fluids weren't actually going to a baby in need. So where did they think the milk was going? "Look, there are a lot of breast milk fetishists out there," Kwasnica says. "There are strange people who buy the milk, and they do whatever weird thing they're going to do with it." Her own network actively watches for signs of breast milk fiends, Kwasnica says that other sites might be less stringent. Only The Breast, for instance, includes a category for "Men buying breast milk" with requests like "I am a middle-aged male who loves the taste of warm, fresh breast milk," and "I'm working out everyday and I need some good protein to help my muscle build up."

"Women and their dirty feminine fluids."

According to Kwasnica, the online milk sharing she oversees is done among careful, caring parents — those who would rather feed their babies breast milk than formula, or would prefer to share their milk than dump excess stock down the drain. "If babies were getting sick from this, I would be the first to know," she says. Furthermore, Kwasnica worries that this study reflects how society at large conceives of breast milk. "It's this perception people have of women and their dirty feminine fluids that need to be kept under control," she says. "Well, we're using that fluid to nourish babies. Get over it." 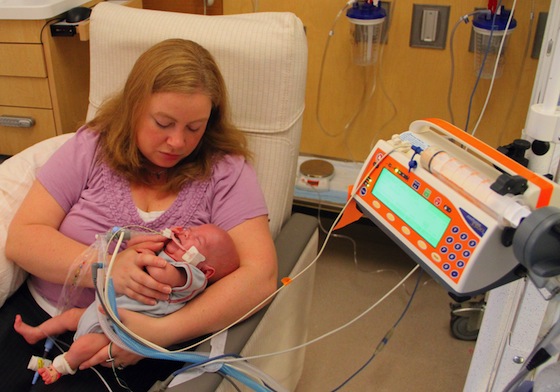 Keim's study may have exacerbated tensions between those on either side of the online breast milk debate, but both parties now hope to see her research catalyze two developments: public awareness of the importance of breast milk, and interventions to ensure that any milk a baby consumes is safe.

According to Updegrove, who oversees 13 milk banks in the US and often copes with a breast milk shortage that leaves "desperately ill babies" at risk, the public needs to reconsider their perception of breast milk as "a free-flowing commodity." Rather, she says, it's a scarce resource — and lactating women who shill milk online should reconsider their approach. "If you're a lactating mother, then you have a superpower," Updegrove says. "You can save a life, and with milk banks, you can do it safely."

"If you're a lactating mother, then you have a superpower."

But because milk banks are often so short on supply, they tend to restrict milk donations to the neediest of babies. Meaning that in myriad scenarios — adoptive parents, two fathers, an ailing mother — an infant wouldn't qualify for milk. The fees for milk banks are also steep, with milk running around $4 an ounce and rarely covered by insurance. While Kwasnica doesn't promote paying for breast milk, she says that those factors make informal online milk exchanges a necessity for thousands of parents.

So rather than "demonize" online milk sharing, she wants to see doctors and federal regulators get involved. "We've asked for guidelines and educational resources for years, so that more women know how to safely express, store, and ship milk," she says. "Trying to shut it down doesn't help. It's like abstinence-only education. People are still going to have sex. And we're still going to share breast milk."