Google Apps for Business is getting a new entry today, in the form of Google Maps. At an event at Google's San Francisco office, VP of Google Maps Brian McClendon and his team just announced Google Maps Engine Pro, a tool that the company says will let companies of any size help plot any location data they want to Google Maps. At a high level, it lets users import a spreadsheet of data and view it on Google Maps — the company says it'll be a more intuitive way to make sense of data in relation to real-world surroundings rather than in the columns of a spreadsheet.

Google gave plenty of examples to help make the somewhat abstract concept more clear. Imagine a company had a long list of business leads and addresses for a new region they wanted to enter. Typically, that data could be stored in a spreadsheet or other kind of text-based database, which doesn't do a lot to help you actually see where you need to go. Google Maps Engine Pro lets users import and plot all of the data contained within onto a map. 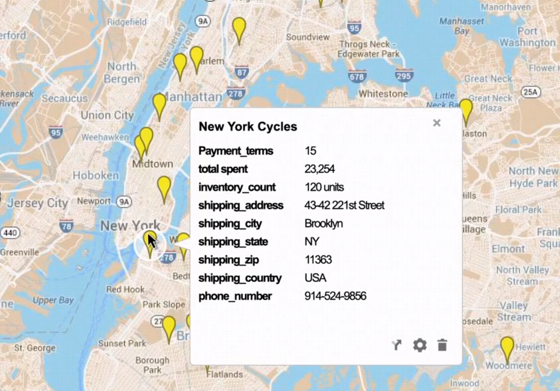 All of the locations will show up as pins on the map, and the other columns of data in that spreadsheet show us as filters you can use to sort the data. So if that sales lead document had a column ranking things as either high or low priority, that layer could be applied to the map so you can visually see the most important locations. Maps can contain up to 10 layers of data, and Google says you can import spreadsheets with up to 2,000 rows — so you can quickly build a map with 2,000 different locations on it.

Naturally, Google's built in all of the standard sharing and collaboration options you'd expect — you can share custom maps with other users, who can then edit and add information to the maps as they see fit. Maps essentially show up in Drive just like any other document, and they can be as private or public as a company needs them to be. They can also be accessed through a new mobile app: Google Maps Engine launches today for Android and lets users get all of their custom-built maps. There's no iOS app yet, but director of Google Maps for Business Vinay Goel said to "stay tuned."

Google's essentially banking on familiarity with Google Maps to make this into a compelling product — McClendon cited the 1 billion monthly active Google Maps users as a compelling reason to roll the product out to businesses. It's part of the company's "work the way you live" vision; in a world where iOS and Android smartphones have begun to dominate business because of their popularity with consumers, Google likewise believes that using Google Maps Engine Pro will be a easy and fruitful transition for a business that uses locational data. And Google believes that's just about every business out there. That said, the company's consumer product is already so robust, it'll need to really focus on selling the benefits of this service to businesses — it seems like this will be most useful for companies that need to work with big data sets. Google Maps Engine Pro is available today for $5 per user, per month, and Google's also offering a free version of its enterprise-focused Google Maps Engine product for anyone to evaluate.