Netflix announced its third quarter numbers today. It beat expectations with revenue of $1.11 billion and earnings per share of $0.52. It also hit the high end of its guidance by adding 1.3 million new domestic subscribers, giving it 31.1 million US subscribers and pushing it past rival HBO.

Netflix has been on a roll lately. After a disastrous end to 2011 in which it tried to spin off its DVD by mail business into a separate unit called Qwikster and raised prices on streaming-only customers, the company has roared back over the last year with rapid subscriber growth, its first Emmy awards, and a booming stock price. Analysts predicted this morning that, for the first time, Netflix would overcome HBO in terms of US subscribers this quarter.

The stock hit a low of $53 a share in August of 2012 after tumbling off the Qwikster news. It has since increased in value to $352 a share, a new record for the company. It's up more than 6 percent in after-hours trading today. 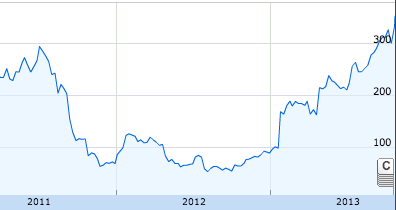 Last quarter Netflix recorded $1.07 billion in revenue and added 630,000 subscribers. Analysts were predicting that number would rise to $1.10 billion, a 26 percent gain over the same quarter last year. The company's free cash flow declined about 45 percent from last quarter, but was up significantly year over year.

'Lillyhammer' may have been a flop, but the Dutch people seem to love Netflix

Netflix has also invested heavily in international expansion over the last year, launching in Latin America, the UK, and Netherlands. Analysts expected it to grow from 7.75 million last year to between 8.3 and 9 million this quarter. Given the costs of entering new markets, however, this unit was expected to post a loss. Netflix bested this, growing to 9.19 million. Lillyhammer may have been a flop, but the Dutch people seem to love Netflix.

A number of big moves have been rumored on the horizon for Netflix, including a deal with Marvel to produce original series and a partnership with cable companies to have Netflix included as an app on their set-top boxes.

For all the media junkies keeping score, Netflix noted in its earnings report that Orange is the New Black is on track to become its most watched original series by year's end, beating out the award-winning House of Cards. The company also writes that, "While our original series get most of the headlines, a bigger percentage of overall Netflix viewing is generated by our exclusive complete season-after series. During the quarter, we launched new seasons of The New Girl, The Walking Dead, Scandal, Breaking Bad, Revolution and Pretty Little Liars."