Flipboard for Windows 8: a Live Tile twist similar to Android and iOS

Share All sharing options for: Flipboard for Windows 8: a Live Tile twist similar to Android and iOS

Flipboard promised its own Windows 8 app back at Microsoft’s Build developer conference, and it’s nearly ready. Nokia has an early version of Flipboard for Windows 8 here at Nokia World in Abu Dhabi, and we got a chance to take a quick look. Essentially, it’s a very similar experience to the Flipboard versions available on Android and iOS. You can swipe through your own feeds, add new ones, and also search for queries or publications. Flipboard has also added in pinning support for Windows 8, allowing you to add feeds to the Start Screen.

In terms of performance, it runs as fast as you’d expect on Windows 8, and it’s clearly optimized for Windows RT too. I had no issues swiping through lots of articles, pinning, and multitasking with the app running on Nokia’s Lumia 2520 tablet. It’s also heading to Windows Phone shortly, but Nokia only teased a photo of that particular version today. 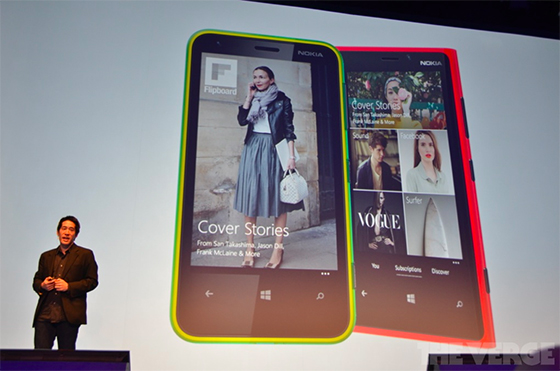 Nokia introduces its first tablet, shows off Instagram and Vine for Windows Phone