Respawn Entertainment's Titanfall, one of the most anticipated Microsoft-exclusive titles in recent years, is coming to North America on March 11th 2014 and Europe on March 13th. The first-person-shooter sees you fighting — and piloting — large mechs, with a heavy focus on online integration. The developer's intention is to mesh a traditional online multiplayer experience with huge cinematic set pieces usually saved for single-player campaigns.

Titanfall won multiple awards when it debuted at the E3 games conference, and similarly impressed at Gamescom 2013. It'll launch on Xbox One, Xbox 360, and PC. As seems to be tradition for big releases, there'll also be an opulent collector's edition, this one priced at a somewhat ridiculous $249.99. Titanfall: Collector’s Edition will include a giant 18-inch statue of the game's Atlas Titan mech along with a diorama and battery-powered lighting, a 190-page art book, and a large schematic poster of the mech. 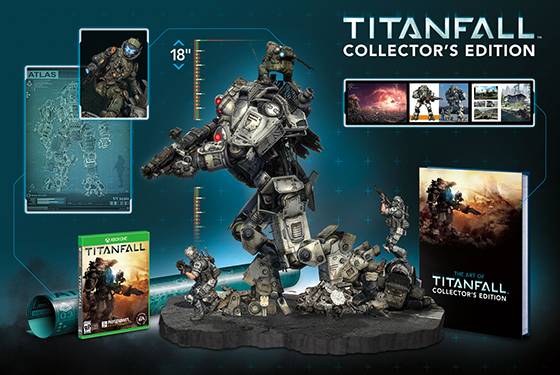