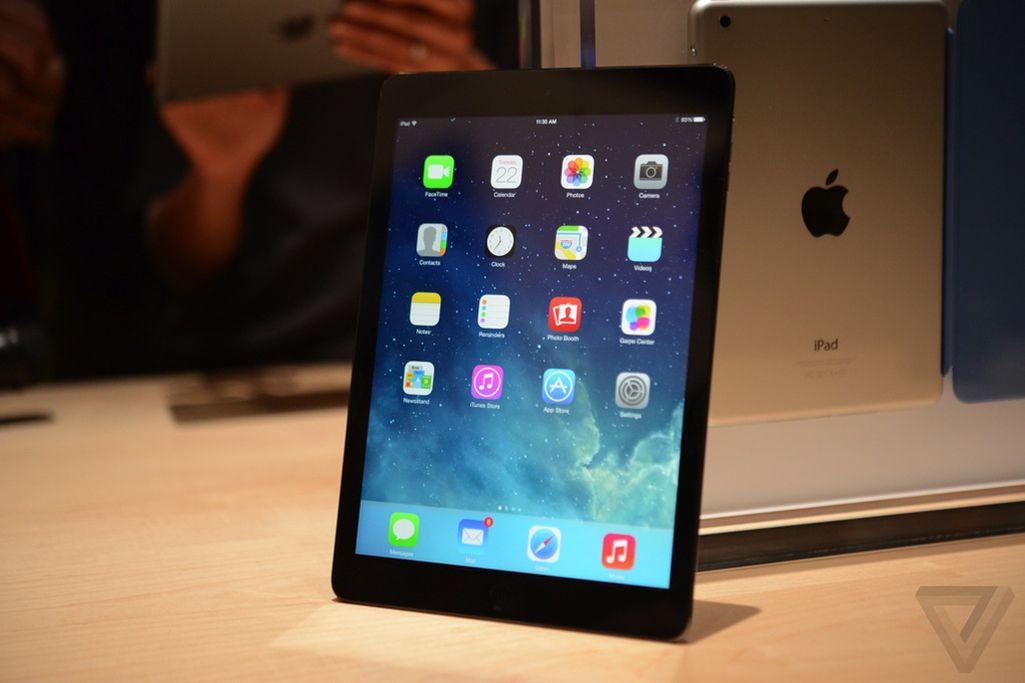 After a year in which Apple’s product announcements have largely leaked out ahead of time, today the company delivered something of a surprise: a redesigned tablet, the iPad Air, that is the lightest full-size iPad to date at just 1 pound. Its announcement was coupled with the introduction of an iPad mini with the same Retina display as the bigger model and the A7 processor used by the iPhone 5s and iPad.

The iPad announcements followed a minor update to Apple’s Macbook Pro line of laptops and some more information on the new Mac Pro desktop computer, which is getting its first major redesign since 2006. The laptops go on sale today, with the Mac Pro arriving in December for $2,999.

On the software side, the watchwords for the event were “free” and “today.” OS X Mavericks, the latest update to Apple’s desktop operating system, is becoming a free download in a move likely to send a shiver up the spine of Microsoft, which generates huge profits from sales of Windows. Also arriving free today, at least for anyone buying a new Mac or iOS device: new versions of iWork and iLife, Apple’s productivity and creativity suites.

The 9.7-inch iPad is still around, but it’s seen its first major redesign since the iPad 2. Now called the iPad Air, it’s a couple of millimeters thinner, almost half a pound lighter, and looks like an outsized iPad mini, with a smaller bezel and squared-off edges. Like the iPhone, the iPad Air is running a 64-bit architecture on an A7 chip, and the Retina screen isn’t going anywhere. Neither is the venerable iPad 2, which has now outlasted two generations of iPad and will remain on sale at $399. The iPad Air, shipping November 1st, starts at $100 above that, with a 16GB Wi-Fi version priced at $499 and a cellular one at $629. If you thought the "Air" moniker suggested that an "iPad Pro" was also in the works, you weren’t the only one — but despite rumors of a giant 12.9-inch iPad, the Air remains the largest tablet in Apple’s lineup.

Apple has revamped the iPad mini with a feature everyone thought it should have had at launch: a Retina display. The new 7.9-inch mini, coming sometime in November, has a 2048 x 1536 screen just like the Air, and it’s also been updated to a 64-bit A7 chip; to cover those costs, Apple is bumping the price up to $399 for a 16GB Wi-Fi model and $529 for one with mobile data. The original iPad mini is sticking around as Apple’s cheaper option, though at a starting price of $299, it’s still $70 more than its competitor the Nexus 7. Apple’s mini announcement included zero surprises, but that means it didn’t disappoint either: if you want a small tablet, Apple has only made your options better.

The wait is almost over for the redesigned Mac Pro, which was previewed at Apple’s developer conference in June. At one-eighth the volume of the previous generation, the Mac Pro is a futuristic cylinder aimed at professionals who spend their lives in Final Cut Pro, Logic Pro and Aperture. It runs on an Intel Xeon E5 processor and has room for up to 1 terabyte of flash storage. (There is no option for a traditional hard drive.) The Mac Pro is being manufactured in the United States, the first Apple computer to be assembled domestically in decades. It starts at $2,999 and will be available in December.

Apple’s lineup of workstation laptops was lightly refreshed today, with a handful of updates focused on speed. The 13-inch Macbook Pro is lighter at 3.46 pounds, thinner at 0.71 inches, and quicker as well: It runs on a 4th-generation dual-core Haswell chip from Intel, and its graphics run up to 90 percent faster than the previous generation. It’s also cheaper, starting at $1,299 instead of the $1,399 that its predecessor cost. The notebook gets up to nine hours of battery life, Apple says, and includes improved flash storage, Wi-Fi, and Thunderbolt 2. It starts shipping today.

The 15-inch Macbook Pro uses Intel’s Crystalwell chip, with improved graphics performance and up to eight hours of battery life. Like the 13-inch model it includes faster flash storage, Wi-Fi, and Thunderbolt 2. It starts at $1,999, down from $2,199 for the previous generation. It starts shipping today as well.

New Macs aren’t all that’s shipping today. After being announced in June, OS X Mavericks is finally seeing release. The latest version of Apple’s operating system is an iteration on Mountain Lion, but it refines the software and adds what Apple promises are significant performance improvements. Even better, it’s free: Apple wants to get all users onto its latest operating system, so it’s handing out downloads to anyone with a Mac from the past several years. OS X has never been particularly expensive, but with previous versions shipping for $20 or $30, it’s a significant change in the business model.

All the apps of the iLife suite have been redesigned for both OS X and iOS, with a focus on the 64-bit architecture now used on both the iPhone 5S and the new iPad line. Apple says the new iPhoto and iMovie apps will be better at browsing and sharing, and GarageBand now has 32 tracks on iOS and a new sound library on the Mac, along with features like Drummer — which lets you purchase, well, virtual drummers with names like "Kyle" and "Gavin" to play along with your tracks.

iWork has been rewritten from the ground up using 64-bit architecture. New effects and animations can be found throughout the apps, which are available for free today with the purchase of a new Mac or iOS device. Pages, Numbers, and Keynote are integrated with their respective web versions, allowing the documents to be edited on Macs and PCs. And iWork also added collaboration features, allowing documents to be edited by multiple users simultaneously.