Robot city: how the machines are driving Pittsburgh's future

Share All sharing options for: Robot city: how the machines are driving Pittsburgh's future

After more than a century, steel production in Pittsburgh is all but over, leaving in its wake industries based on higher education, health care, academic research, and robots. Lots of robots. And when it comes to robots, the goal is more focused on building a framework for the future than an infrastructure from the past. And for that reason, the city has become a place where far-flung ambitions are supported and encouraged, even if the end goal is a long way off. Sometimes it’s as “far off” as the moon.

That’s where John Thornton wants to go. And while the president of the Pittsburgh-based space-robotics company Astrobotic Technology knows it might take some time to get there, he’s convinced it’s possible. The first step is to build a robot that’s designed to do the most practical things one might imagine about moon exploration: first, deliver exploratory robots to and from the lunar surface. And next, find water there.

“We call it the FedEx / UPS model,” he says, laughing a little.

The plan, he says, is to charge a fee (currently estimated at around $550,000 per pound) to deliver cargo to the lunar surface. The deliveries will be done for the benefit of any institution — universities, private companies, and whoever else can afford the cost — and if all goes according to plan, they’ll be shipping as soon as 2019.

With the revenues from the FedEx model, they’ll then explore the lunar surface in search of a water source. And from there, it’s anyone’s guess where they’ll go.

“If you’re trying to tackle something like moon exploration, you don’t start with how to build a futuristic city on the moon,” he says. “You start simple.”

That premise tends to embody much of the robotic exploration going on in Pittsburgh right now.

"No one really knows what the robot of the future is going to look like."

Take Beyond Theory as an example. This company isn’t going to the moon anytime soon, but they’re taking on a similarly ambitious task: they want to rebuild the human arm from their basement in Pittsburgh’s west suburbs. More specifically, they want to make robotic limbs that can function by detecting eye movements alone.

For example: if your arm has been amputated, you might attach a prosthetic limb to your body. But that prosthetic is probably just going to hang there; you won’t be able to grasp objects or wave or type. There are experimental projects — the main one based out of a medical research lab at Pittsburgh’s UPMC hospital chain — that allow people to manipulate prosthetic limbs by simply thinking about it. But those require brain surgery, and they’re not available on the open market.

Beyond Theory hopes to do the same thing, developing a technology that will understand and act upon the wants and needs of the brain, but without actually cutting into gray matter. They want to create a non-invasive prosthetic arm that’s inexpensive, easy to use, available to the public, and, most importantly, reliable.

That’s an ambitious goal. And like Astrobotic’s lunar explorer, the path they’re taking is relatively simple. Baby steps. Astrobotic had the “FedEx / UPS model.” Beyond Theory has the “Pop-Tarts model.” 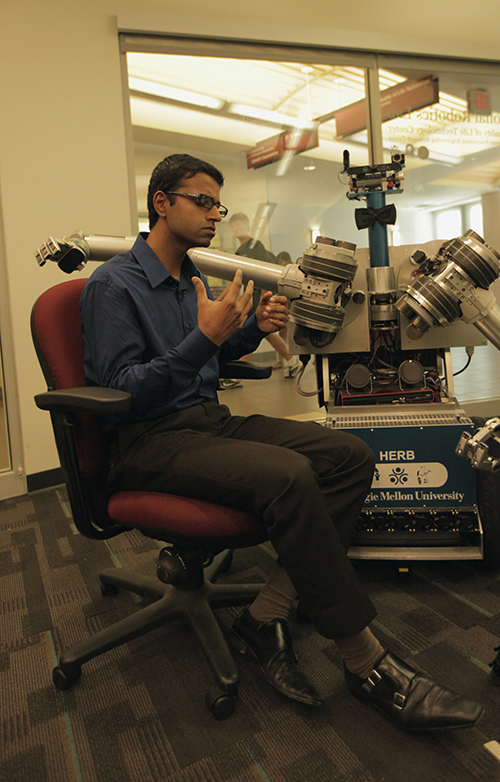 “I wanna hire the guy that makes the machine that makes Pop-Tarts,” says Chase Dudley, co-founder of Beyond Theory. The idea is that the Pop-Tart machine “just goes all day and cranks out Pop-Tarts.”

“For us, one of the main concerns is reliability,” says Chase’s partner and co-founder, Shane Adams. “To have a functional device is great. But it’s not great when it breaks.” Especially when the device is your arm. The goal, he says, is to create a robotic device that’s as consistent and manipulable as the human arm itself. “Can this be used 22 hours straight?” he asks rhetorically. Not yet, but that’s the goal.

Pittsburgh today is a city with big goals.

Just ask Siddhartha Srinivasa, an associate professor in Carnegie Mellon University’s Robotics Institute, who oversees the Home Exploring Robot Butler project (HERB). Although the immediate goal is to design a machine that can perform “challenging manipulation tasks in places where people live and work,” the broader goal is to create a robot that can exist and interact seamlessly with a human environment. A robot that can tell when it’s bumping into someone, for instance. Or that can find and retrieve a milk carton from the refrigerator. A robot that can be, in a sense, human. Srinivasa says HERB’s not there quite yet. But that’s the goal.

“No one really knows what the robot of the future is going to look like,” Srinivasa says. “And that’s the beauty of robotics. It’s not so rigidly structured — like a car, for example. Robots can be anything. And so, we’re still in the stage where we’re trying to figure out what these robots should look like, what they should be, how they should behave.”

And that’s an exciting place to be, he says.