Is the iPhone 5C a success?

It all depends on your definition of 'success'

Share All sharing options for: Is the iPhone 5C a success?

Apple just briefly touched on the retail performance of the new iPhone 5S and 5C during its iPad event yesterday, and what little data it offered was old: the company once again touted the 9 million units sold during the first weekend before moving on to App Store stats and, shortly thereafter, OS X Mavericks. That was it. The iPhone wasn't mentioned again on stage.

If the 5C isn't selling, it's not for lack of trying

Critically, that brief mention offered no more insight into the breakdown between 5S and 5C sales. Apple rarely offers data on sales by model and may have been especially cautious about providing information during the quiet period before its earnings. But as Apple has switched up its iPhone strategy this year — offering two new models for the first time — interest in the success of that strategy has been extremely high, particularly since the 5C didn't live up to the rumors and expectations that Cupertino would deliver a low-cost phone for price-sensitive markets like China, India, and Brazil. Can Apple pull off an "unapologetically plastic" smartphone at a premium price, or is it still pigeonholed in the very high end of the market with its flagship 5S?

If the 5C isn't selling in line with Apple's expectations, it's not for lack of trying. The streets of New York, Chicago, San Francisco, and other major cities have been plastered with bright billboards of it. "For the colorful," the tagline goes. Apple's website featured the cheaper device prominently for the first month after the release, giving way only to the iPad Air announced yesterday. Yet there are signs that the marketing push didn't pay dividends: big retailers like Walmart and Best Buy have already cut the price. And two weeks ago Apple reportedly cut 5C orders, raising fears that demand is weak. Reports ranged from a 20 percent reduction right now to 50 percent fewer parts for next year.

"People were expecting a low-cost smartphone at a retail level."

The internals of the 5C were nearly identical to the 5, meaning Apple had plenty of experience with the supply chain. The plastic casing, a benefit for its cheaper material and easier manufacturing process, meant Apple could achieve better margins on each sale. But the initial price for the phone, $99 on contract in America and as much as $700 in China, surprised many analysts. "This time people were expecting a low-cost smartphone, at a retail level," says Tina Teng, a senior analyst at NPD DisplaySearch. "The 5C is more affordable but it's still on the premium side. They're still trying to capture the higher-profit customers." In other words, Apple may have stranded itself between two worlds: it produced a cheaper-looking phone that didn't appeal to premium customers but was too pricey for more cost-conscious ones.

New data from Localytics, a marketing platform for mobile apps, claims that the 5S was outselling the 5C by more than three to one during the first week. That number has since fallen to roughly two to one. While many analysts and investors saw the 5C as Apple's chance to gain ground around the world, the ratio of 5S to 5C sales is actually higher outside the US. For investors hoping to see Apple breaking into the developing market, this is a bad sign: the company shows no signs of giving ground on the high end. With the 5C, Apple is simply not primed to capture customers where a low unsubsidized retail price is paramount. 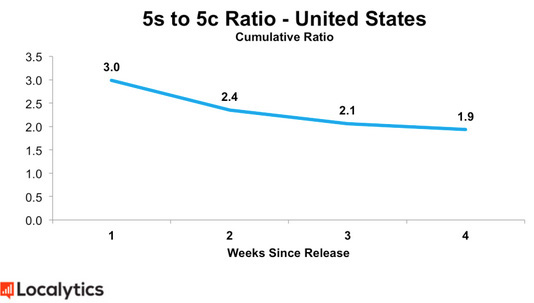 "Just to say that the 5S sold more than the 5C doesn't say a whole lot."

But not everyone agrees that the 5C has failed to catch on. "It's way too early in the life of the phones to determine whether it's a success or failure. They have been out there for three weeks. To try and translate sales figures now is premature," says Michael R. Levin, a partner at Consumer Intelligence Research. "Second, just to say that the 5S sold more than the 5C doesn't say a whole lot. You would expect the phone with new features to sell better and it is. It would have been a big disappointment if the [5C] sold more than 5S."

"To try and translate sales figures now is premature."

For Apple, there's an advantage to releasing two phones at once that goes beyond the sales of any individual model: even better mastery of the supply chain (and for Apple, that's saying a lot). As Tim Cook told Bloomberg Businessweek, "Now the great thing is we’ve grown our capability to do two phones, and when you’ve done one before, that’s a big change." As the range of Android devices grows unabated, Apple seems to be opening up to the possibility of releasing a range of devices each product cycle. That certainly lines up with persistent rumors that the company could release iPhones in a variety of sizes.

"If, as I suspect, next year’s high-end model comes with a larger screen (with the mid-tier model staying the same size), developing the capability to manufacture different models will be particularly forward-thinking," writes Ben Thompson of Stratechery. "Apple is teaching itself to manage two relatively similar lines before they branch out into even more significant segmentation."

This post has been updated to reflect Apple's quiet period before its earnings.