Why would anyone buy an iPad 2 now?

Why would anyone buy an iPad 2 now?

For $399, Apple's iPad mini with Retina display is a far better choice

Yesterday, Apple announced two new iPads: the iPad Air and the iPad mini with Retina display. Both carry Apple's speedy new A7 processor, and both come with high-resolution screens. But when the dust settles, Apple will actually carry four different iPads you can buy — including, improbably, the two-and-a-half-year-old iPad 2.

At first, Apple's iPad lineup seems perfectly symmetrical. The math makes sense. Small-screen iPads start at $299, big-screen iPads start at $399, and upgrades are $100 each. $299 buys you the original iPad mini, which comes with an Apple A5 processor and a 1024 x 768 non-Retina screen. At the top end, you can spend $499 on an iPad Air and get Apple's flagship tablet, with a Retina display and the latest internals. But at $399 you find yourself at a strange crossroads: you can either go back in time to the $399 iPad 2 with the same internals as the older mini, the outdated 30-pin connector, and a larger screen, or you can step into Apple's future: the $399 iPad mini with the same A7 chip as the iPad Air and a beautiful Retina display.

The problem is that the iPad 2 isn't just a larger product: it's one that's woefully out of date. It's three generations behind the times, and it's far too expensive for what you'll get. Like the $299 iPad mini, it feels a little sluggish running iOS 7. (That A5 processor is only roughly half as fast as the A6X in the fourth-generation iPad, to say nothing of the new A7 chip in the new iPad mini and Air Apple announced yesterday.) But unlike the iPad mini, the iPad 2 doesn't have Siri. It also doesn't support AirDrop, an easy way to share pictures and videos with other Apple devices around you. 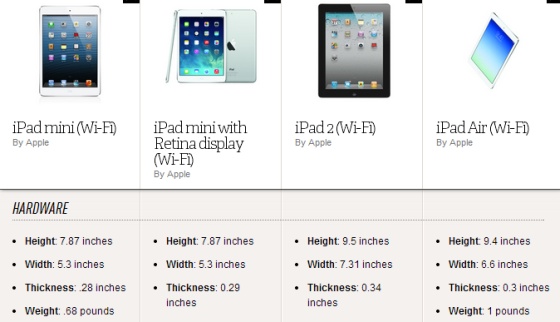 For $299, the iPad mini still makes sense despite the aging components inside. You can't get a higher-quality iOS device for the price. But at $399, consumers have to pick between the iPad 2 and the new iPad mini with Retina display, and that's not much of a choice: that mini will be far faster, crisper, more portable and likely more futureproof for the same price.

So why does the iPad 2 still exist? Asked at Apple's event, Tim Cook said only that there was still demand for the iPad 2, and Apple wanted to meet it. But the real answer might be simpler still.

"It's all about size," explains Patrick Moorhead, principal analyst at Moor Insights & Strategy. "There are a lot of people who walk into a store with their minds already set on a 10-inch tablet or a 7 or 8-inch tablet, and they go from there." Ross Rubin, principal analyst at Reticle Research, agrees. "For many consumers, that extra inch or so of diagonal real estate is of paramount importance," he says.

There might be a reason for that fixation beyond "bigger is better." Moorhead says there's a conception that 10-inch displays are better for content creation and multitasking, while smaller devices are geared more towards consuming content.

Why not a cheaper iPad 2, then, to make up for the shortcomings? "The reality is that unless you're designing a lower-cost product, it doesn't cost less," says Moorhead. "Lowering the price would only be lowering [Apple's] margins." Rubin thinks that a lower-cost iPad 2 replacement is only a matter of time, but Apple just didn't have the right product at the right price this week. In other words, Apple doesn't yet have the tablet equivalent of an iPhone 5C, one that could offer the appeal of a new product while preserving the company's margins.

Still, Rubin thinks keeping the outdated iPad 2 around could work for Apple, since the company has done the same thing with its smartphones in the past. Both analysts also pointed to the stockpile of existing iPad 2-compatible accessories as a plus for consumers, who will likely be able to get cases and cables cheaper than buying a set for the newer tablets. But the iPad 2 and the iPhone 4S are Apple's last products with the aging 30-pin connector, and the accessory market is moving on the newer Lightning interconnect quickly.

"Unless you're designing a lower-cost product, it doesn't cost less."

Until Apple has a modern 10-inch tablet that it can profitably sell for $399, we're stuck with the iPad 2.