Get real: Katy Perry lets go of the teenage dream with 'Prism'

The global pop ambassador returns a little more grown up

Share All sharing options for: Get real: Katy Perry lets go of the teenage dream with 'Prism'

Like an incumbent elected official, Katy Perry has a lot of political capital to spend during her second term as popular music’s first lady. We’ve now had three years to absorb our new global pop ambassador: along with other leaders like Nicki Minaj and Britney Spears she forged an identity that was equal parts girlish innocence and record-industry sex kitten, cementing her place in the hearts of both preteens and post-grads.

Half of the earth is hungry to lose itself in her world yet again, and the other half is eager to usher in the end of her career

Starting with the release of “Roar” two months ago it’s been even harder than usual to keep Katy off your radar. The current PR deluge reminds me of McDonald or Coca-Cola’s: why do you need to advertise if everyone already knows what you are? The flood of appearances on TV, radio, and social media is just the beginning of another period of top-down media hypersaturation.

She’s unleashed Prism on a planet that not only knows her, but has been changed by her: half of the earth is hungry to lose itself in her world yet again, and the other half is eager to usher in the end of her career. But how does Katy herself feel about a world stage she now has an active role in producing? Like her relationship statuses over the past few years, it’s complicated.

But there’s been a subtle shift in presentation that’s palpable to a fan like me: away from the lickable sheen of a candyland queen and into the chaste matte glow of a mother who shops at Talbot’s and does Pinterest in her spare time. Look at her performance on last week’s Saturday Night Live.

An inoffensive pop star in a white sports top and sensible plaid skirt, bouncing between flowing lengths of shimmery silk: this is an emotionally evolved pop queen, looking back to the ‘90s for inspiration as much she does to the glitter-coated present. “Walking On Air” is her triumphant ode to the CeCe Penistons, Janet Jacksons, and Captain Hollywood Projects of her youth: it’s all chopped up soulful vocals and shuffle-sequenced hi-hats.

Working again with dance producers Max Martin and Dr. Luke, Katy Perry was set to create a palette in Prism that could span the recent history of pop: Martin has written Billboard hits since the actual ‘90s (“Everybody” and “Show Me Love”), where Luke specializes in giving plastic shine to ripped-off underground sounds like dubstep (Britney’s “Hold It Against Me”) and chiptune (“TiK ToK”). The only member of the Prism team that can be blamed for moving pop music into the actual future is Bloodshy, whose stunning work on tracks like Sky Ferreira’s “One” is still slightly too edgy for global consumption.

But as a team they’ve poured a strong 4 / 4 foundation for Perry’s continued dance-floor supremacy: these are the songs on Prism that you can already envision dominating clubs or cars on Friday nights on any continent. “International Smile” unifies the globe as its protagonist jet sets “from Tokyo, to Mexico, to RIO! … from LA, Miami, to NEW YORK CITY!” and then — figuratively, at least — to Paris, as it rips the shimmering guitar-vocoded chorus of Daft Punk’s “Digital Love” wholesale to astonishing effect.

There is perhaps no greater achievement since the 120 BPM kick drum became the musical Esperanto for “party time” in the last decade than “Birthday.” It’s a Prince-flavored gem of synthy-swing-disco that is the most efficient use of Perry’s carefree lyricism since “Last Friday Night.” There is absolutely no way we won’t be hearing this song less than we’ve heard “Blurred Lines” and “Get Lucky” combined — it’s all champagne-popping samples and barely naughty taunts. The chorus is… well, it’s fucking perfect Katy Perry.

And at the end of the chorus, like a beautiful kiss goodnight, a transcendent whispered acapella:

Songs like these dominate a third of Prism — they’re the ones that will keep checks coming in to Kitty Purry, Inc. for the next decade, the kinds of songs every savvy pop star needs to create every once in a while. But as the album title suggests, there are at least two other sides of the lens that require careful attention to obtain a full picture of Katy Perry in 2013.

One thing Luke, Martin, and Bloodshy aren’t that good at is creating backing tracks for Prism’s more feminine moments. When ‘90s pop didn’t sound like the club, it often sounded like a 20-something with an acoustic guitar — think Lisa Loeb, Paula Cole, and Sarah McLaughlin, or pre-stardom Katy Hudson. The producers take songs that could actually benefit from a preciously strummed six-string and bathe them in a radio-ready cocktail of beats and synths, most notably in “Unconditionally,” a power ballad that shoehorns awkwardly timed kicks into what should be a coffee-shop snoozer. Lyrically, this is the almost-30 Katy that came to the world in the July issue of Vogue, where she was photographed in the natural beauty surrounding Santa Barbara by Annie Leibovitz. 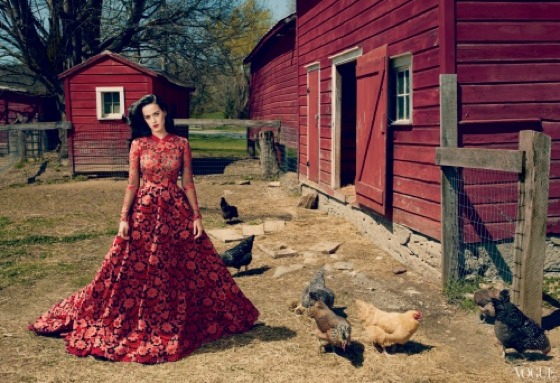 Just hangin’ around the henhouse NBD.

While these unabashedly girly tracks don’t do much for me emotionally, I know in my heart that they will do a lot for women trying to get through a rough patch — they’re the kind of songs that I feel they will play amongst small groups of other women, or when they’re putting on makeup in the morning. There are soaring nuggets of Enya-esque brilliance in “Spiritual” and “This Moment” that express a universal struggle people with Y chromosomes will never be able to sink their teeth into — although I can appreciate them, I can tell just by their titles that they weren’t written for men.

The third piece of the prism is the set of songs that bring the producers’ strengths perfectly in line with Perry’s lyrics — they’re generally mid-tempo anthems that appeal to a strong center between emotional empowerment and classic rock ‘n’ roll flair. On Friday the high school football band in my neighborhood performed a pumped-up version of “Roar” that found the entire audience chanting along with the chorus — I can see other choruses like those in “Legendary Lovers” and “Ghost” popping up in potent local gatherings: where Dr. Luke excels in transforming obscure sounds into popular ones, Katy Perry’s real strength is wrapping hyper-specific emotions into a new format that everyone can relate to.

I can’t tell if Prism will take the world by storm like Teenage Dream did, but I’m not sure if Katy herself wants that kind of attention again. The only thing I know for sure about her new album is that it feels at home as a real portrait of America’s sweetheart: a capitalist diva with all the self-doubt of a teenager and the confidence to deliver all of it without the slightest hint of regret.