New York City mornings never change, at least not for me. I wake up, I get a bagel and a cup of coffee, and I get on the subway to head to work. I cross my fingers hoping to get a seat so I can delicately balance my coffee between my knees and play a game or two on my phone. I’ve beaten a dozen games on my phone while riding the F train, and at least twice spilled hot coffee all over myself — once on a complete stranger who for some reason didn’t care that I was right in the middle of a key railroad purchase in Pocket Trains.

Recently, I’ve upgraded the experience quite a bit. I don’t get coffee, and as soon as I commandeer a seat, I open up the new 15-inch MacBook Pro with Retina display. The 4.46-pound laptop has a gorgeous screen, a fast processor, and a truck of a graphics card. It has all that, and a battery that Apple promises will last all day. It’s a workhorse, a powerhouse of a PC.

The 15-inch Pro, which starts at $1,999, is designed for everyone from the ultimate multitasker to the video producer. But for me? It was my chance to upgrade my commute from Badland and Pocket Trains to Portal 2 and The Wolf Among Us.

Sorry, old lady. This seat’s mine. And I’m probably going to miss my stop.

In the PC industry today, smaller is better. Most manufacturers focus their engineering and marketing muscle on 13-inch laptops, or 11.6-inch hybrids, or 10-inch tablets. Even powerful machines like the Sony VAIO Pro or the Toshiba Kirabook start their sales pitch with "look how small we are!" The 15-inch Pro, by comparison, is a beast — even though it’s slimmed down a lot over the last couple of years. Last year’s model felt remarkably smaller, a huge improvement over the previous generation; nothing at all changed this year. There’s still little to complain about, anyway: between two Thunderbolt 2 ports, a full-size HDMI jack, two USB 3.0 ports, and an SD card slot, there’s basically nothing you can’t plug or stick in the Pro, and we’ve pretty much all gotten used to life without optical drives by now. 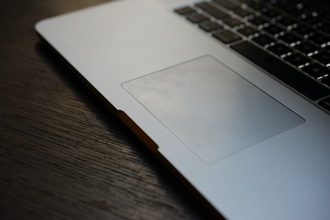 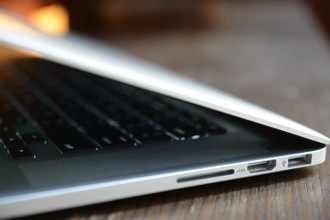 At 4.46 pounds and 0.71 inches thick, it did drag my backpack a couple of inches further down my back than my Air normally does, and next to most ultrabooks it feels pretty huge. But the MacBook Pro is no ultrabook. It’s more like a gaming PC — and next to just about every gaming PC on the market, the Pro is supermodel skinny. Its silver aluminum body is as well-crafted and attractive as ever, even as other manufacturers copy its design in not-so-subtle ways. I do miss the black MacBooks, but Apple’s design formula remains one of the industry’s best.

The backlit keyboard is good, clicky, well-spaced, and flanked by two impressively loud speakers. That’s one advantage of a larger machine, that there’s just more room for speaker grilles and to generate loud, full audio. The trackpad remains bizarrely unimpeachable, still the best on the market by leaps and bounds — it’s glassy, smooth, and responsive in a way simply nothing else out there is. And the trackpad really, really matters.

This isn’t the MacBook Pro with a Really Great Trackpad, though. It’s the MacBook Pro with Retina display. The 15-inch screen is unchanged from last year’s model, but it’s still as beautiful as ever. Its 2880 x 1800 resolution is eye-poppingly large, but also a bit misleading: you’re not actually using that much more real estate. Like with previous Retina display models, it shows you the same amount of stuff you’d see on a 1440 x 900 display like the MacBook Air’s, but for every one pixel it shows you four instead. That means everything, so long as it’s optimized, is crystal clear. You can choose to run the machine in 1920 x 1200 resolution and gain just an astonishing amount of real estate, but it defeats some of the sharpness, and you’ll need a magnifying glass to see much of anything anyway.

Apple and its developers have done a good job updating apps and websites to look good on these ultra-high-res displays — between the MacBooks, the iPads, and the rapidly increasing spate of high-res Windows laptops from Sony, Toshiba, and others, there’s plenty of incentive — but there are still exceptions. And as always, the exceptions look terrible: blurry, large, just ugly. 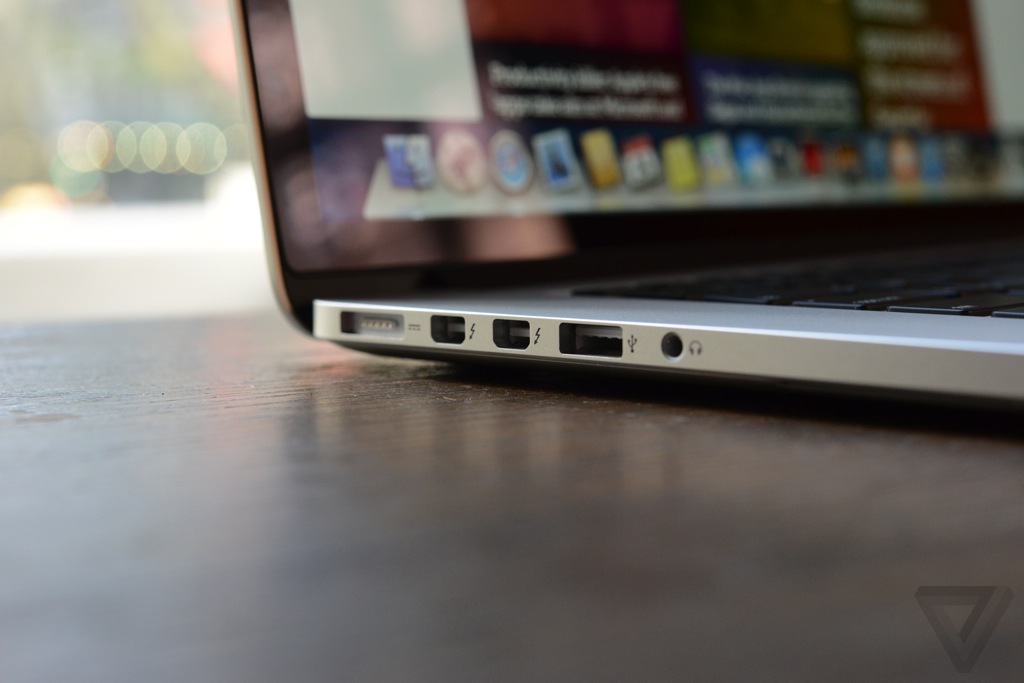 With the right configuration, this is a serious gaming PC 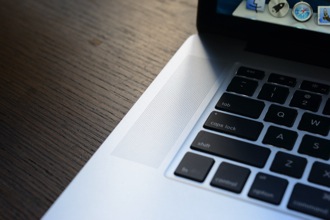 The 15-inch Pro’s best analog is probably the Razer Blade, another high-end PC that crams its multitude of powerful parts into a slim body. The Blade costs $1,999 for a model with 256GB of solid-state storage, just like the Pro. (The Blade does have a $1,799 model with 128GB of storage, but a gamer of any intensity needs more than that). Both come with quad-core Intel Core i7 processors: the Pro’s clocked at 2.3GHz and the Blade’s at 2.2. Both have 8GB of RAM, offer Nvidia’s discrete graphics cards (though you'll pay hundreds more for that on the Pro, while it comes standard on the Blade), and are straight-up gaming powerhouses.

The Pro I tested is the top-of-the-line model: 16GB of RAM, 512GB of storage, and Nvidia’s GeForce GT 750M graphics card with 2GB of memory. It’s a $2,599 machine, and appears to be utter overkill for everything I could possibly want to do. I gave up opening browser tabs to try and cripple the machine after about 50, and everything from 4K footage to iMovie ingestion and rendering happened faster even than I expected.

I've definitely used better gaming machines, but not many. I could make the frame rate on Bioshock Infinite dip below what I’d consider flawless levels, but even on the highest settings couldn’t make it do more than stutter a bit as I wandered about Columbia, shooting everything and everyone I could find. Portal 2 kept up beautifully as well, never doing more than dropping the occasional frame while I plotted and schemed against GLaDOS. The library of games available for OS X still trails Windows, so the hardest of hardcore gamers should look elsewhere, but everything I found ran beautifully. 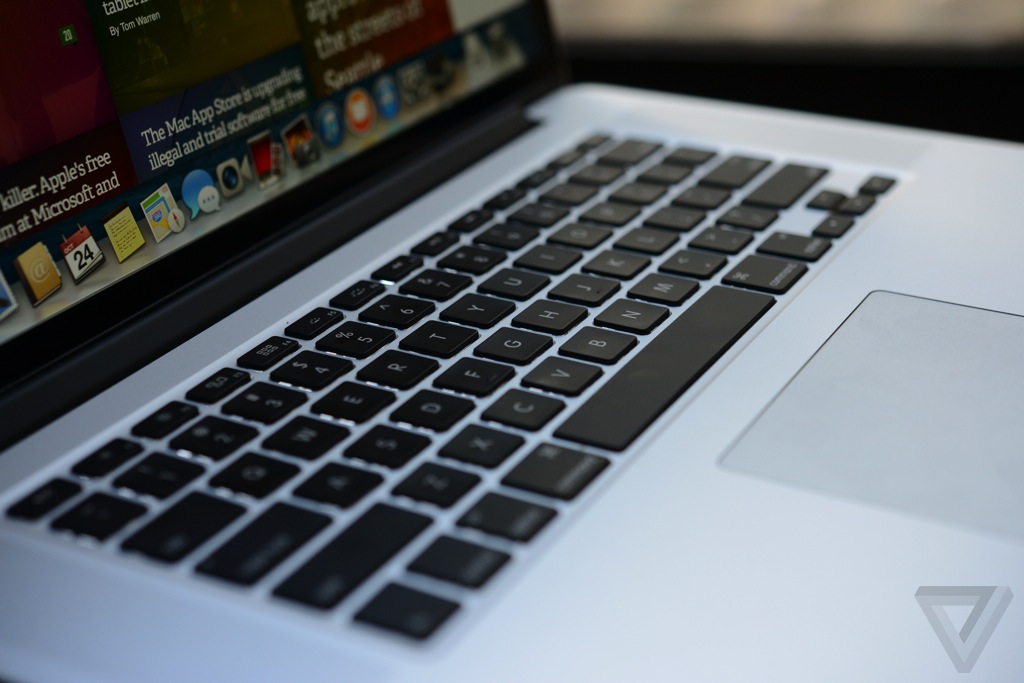 For more normal uses, and more normal users, the standard 8GB of RAM should be plenty. And unless you’re a gamer, the integrated Iris Pro graphics should suffice as well. The graphics are embedded in Intel’s new Haswell processors, the latest-generation chip that promises better performance across the board. On the MacBook Pro, it certainly delivers: with a GeekBench score of 13,503, it’s considerably higher than the 11,969 that last year’s model scored, and a huge leap ahead of the MacBook Air’s 6,057. This is a hugely powerful machine, and it held up to absolutely everything I tested — and then to most of those things all at once. It resumes from sleep in about three seconds, and boots from dead in about 12. I can’t ask much more of any laptop, even a $2,599 one.

The most impressive part, though, is that all this comes with almost no penalty to battery life. The 15-inch Pro lasted 9 hours, 35 minutes on the Verge Battery Test, which cycles through a series of popular websites and high-res images with brightness set to 65 percent. That’s a remarkable score, especially for a machine this powerful. It doesn’t last as long as the MacBook Air, but it runs Crysis, so pick which matters more to you and purchase accordingly. I also played more than two hours of Portal 2 without killing the battery — this laptop is built to last. It does get pretty warm, and a little loud when you start to play games, but it’s not worrisome like the last model was; that’s another upside of Haswell chips.

If you listen to Apple’s Craig Federighi, Mac OS X 10.9 deserves some of the credit for the Pro’s marathon battery life. I’m skeptical — our tests have shown that Mavericks can be both a boon and a detriment in that department — but there’s plenty else to like about Mavericks. The new OS is rock solid on the updated hardware, and Apple’s new, improved (and free) versions of Pages, Keynote, GarageBand, and more mesh perfectly with the Pro’s beautiful screen.

Mavericks isn’t a huge change so much as a touch-up and a feature update: a few new things in Safari, a Finder that is at least slightly more functional than it once was, and much better-looking versions of Calendar, Notes, and Reminders. There are plenty of changes, but ultimately I like it for the same reason I loved Snow Leopard: it fixes what was broken (looking at you, Messages), and doesn’t seem to break anything new. It’s why I’m excited about Windows 8.1, too, and it may not sound like much but it really makes a difference. 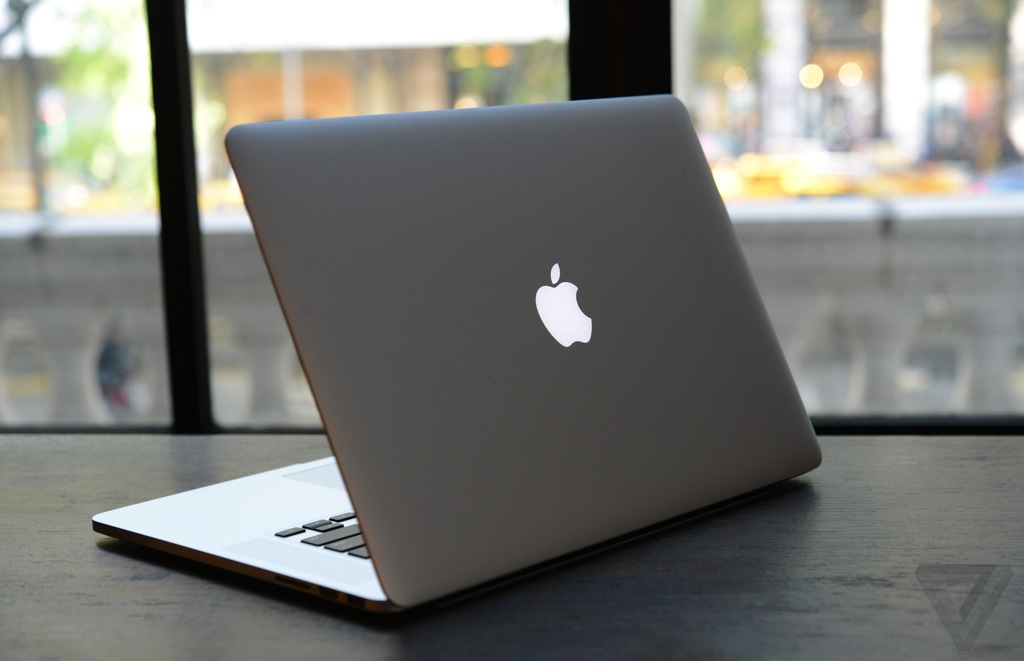 The most impressive laptop on the market, but not the right one for everyone

The 15-inch MacBook Pro with Retina display is probably the best all-around laptop on the market. It checks every box, from “portable enough” to “insanely powerful” to “beautiful trackpad” to “reasonably priced for its market.” At $1,999 it’s a mile from cheap, but compared to other laptops with its capability that price tag isn’t so bad. This is the most versatile laptop I’ve used, one of only a couple that’s at home in any situation, simple or complex, personal or professional.

That’s not to say this is the computer everyone should buy — most people don’t need anywhere close to this much power, and would be better served by a cheaper, lighter MacBook Air, or a powerful-but-smaller device like the Toshiba Kirabook. I hope Apple follows its iPad strategy next time, and slims this high-end machine down while bringing its gorgeous display and horsepower to the cheaper, smaller model. (A 13-inch MacBook Air with Retina display would be awfully close to perfect.)

This is a 15-inch laptop that can do everything. If you don’t want to do everything, buy something else — there are plenty of good, cheaper, lighter, smaller laptops out there, including a handful made by Apple.

But just know this: my back may hurt a little more than yours, and my wallet might be a little lighter, but I played Portal 2 on the subway last night. It was awesome.