It’s ugly, but it works

It's been a long time since I felt self-conscious gaming in public. Ever since Nintendo launched the clamshell GameBoy Advance SP in sleek, shiny silver, portable gaming hardware has felt like something meant for adults. This was only further cemented when Nintendo made its dual-screen DS handheld look like an iPod with the DS Lite.

Today, everyone plays games on the go, whether it's sneaking in Letterpress matches in line at the grocery store or flinging Angry Birds instead of paying attention to a meeting. Even dedicated devices like the PS Vita fail to draw negative attention thanks to design more akin to a cool gadget than a toy. People no longer stare at a twenty-something playing games.

When I pulled out a Nintendo 2DS on a crowded train, people stared. 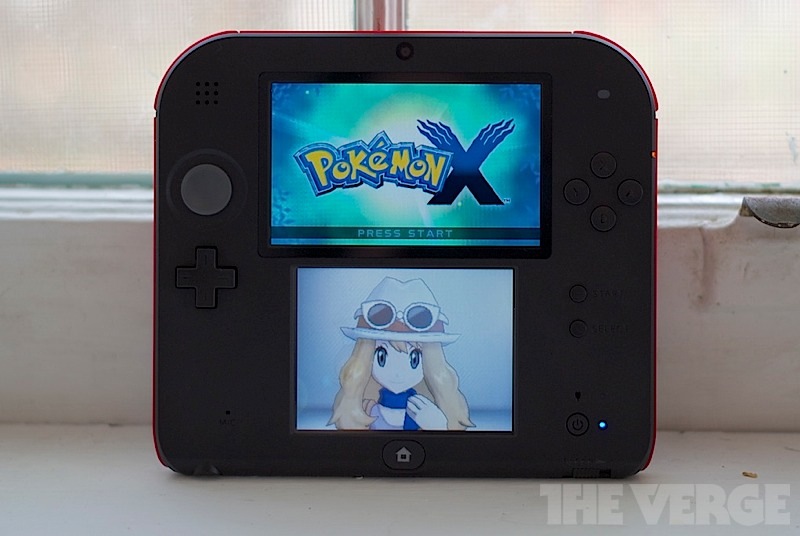 At a time when gaming hardware — including Nintendo machines like the 3DS and Wii U — is becoming increasingly refined, Nintendo’s latest $129.99 device is unashamedly a toy. It's made with matte plastic that comes in either a black-and-red or black-and-blue color scheme, and sports a wedge shape that doesn't look all that inviting to hold. And unlike every previous version of the DS, it doesn't fold, leaving those iconic dual screens exposed to the elements. It's essentially a 3DS without the hinges, and it just looks weird. But what might be even stranger is how all that melts away when you're actually using it. It's a solid device that's comfortable to hold, despite its odd dimensions.

It's comfortable to hold, despite its odd dimensions

The 2DS is most notable for what's been stripped away. Nintendo has removed the 3D functionality, which, aside from a few games, was largely a gimmick anyways. Meanwhile, the shift away from a clamshell design means you no longer have to worry about cracked hinges, though scratched screens are more of an issue now. The simpler build and lack of 3D has let Nintendo create a handheld that’s $70 cheaper than the 3DS XL and $40 less than a base 3DS — and just in time for the busy holiday season.

When you first pick it up, the 2DS does seem a bit cheap, with a creaky plastic casing that picked up multiple scratches in only a few days. It also has some odd proportions: it’s extremely top-heavy, and at its thickest point it's slightly bigger than a Macbook Air.

It has all of the same face buttons as a regular 3DS, arranged in a diamond formation on the right side, as well as a simple directional pad and analog nub. There’s also a home button at the base of the lower screen, a power button on the right, and a few helpful lights to let you know the state of the battery and Wi-Fi connection. These all work as you'd expect, though the shoulder buttons on top feel a bit off — in order to use them, you need to push in from the sides instead of the top. There's also a volume slider along the left side and the only new addition is a switch on the bottom that puts the device to sleep, replacing the simple act of closing a clamshell DS. 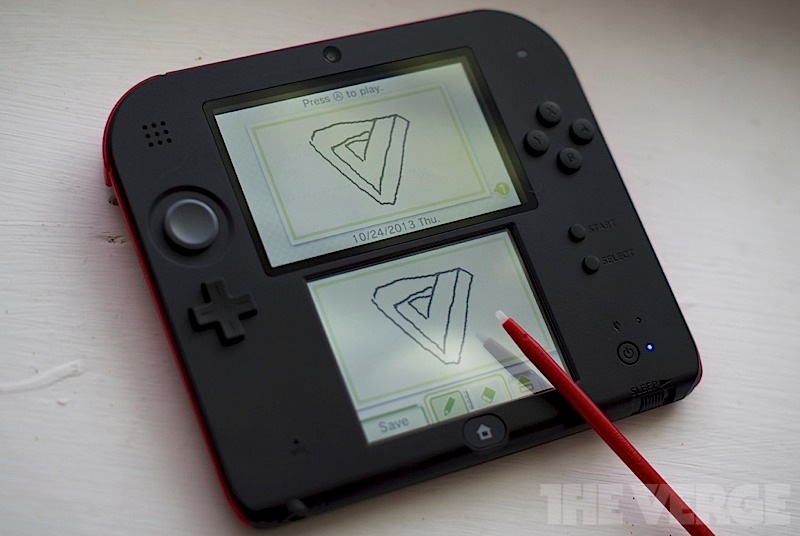 The software is exactly the same as well, so much so that an on-screen instruction prompted me to close the system with the power still on, an act that's impossible given the new design; I flicked the new sleep switch instead. It has the same front- and rear-facing cameras, is backwards-compatible with original DS cartridges, comes packed with a 4GB SD card for downloading games, and has similar battery life to the 3DS with around three to five hours of gaming time depending on how bright you like the screens. And the sleep mode still does a great job of conserving that battery life, making it easy to slowly chip away at a Picross 3D puzzle over the course of a day without actually turning the device off.

All this is to say that, even though it may look a bit off, playing a 2DS is essentially the same as playing a 3DS. The back of the 2DS is entirely flat, with no apparent concessions to ergonomics; there is no moulded plastic to fit your hands, or textured rubber to give you a better grip. It's a simple piece of plastic that looks better suited to keeping a door open than prolonged Pokemon sessions. But once it's in your hand it's comfortable, and the surprisingly heavy top half gives it a satisfying weight. It may look like a toy, but once you start playing it doesn't feel like one. I played Pokemon X until the battery died and had no issues in terms of comfort. I did miss the ability to tilt the top screen whenever I wanted, but it’s not a huge issue, and aside from that playing a 2DS felt a lot like playing a 3DS.

A less powerful, but less expensive, version of the same thing

Unless you really care about 3D — in which case you likely own a 3DS already — the 2DS is functionally the same, but with a nice, cheap price tag. If you're in the market for a new DS, the only real sticking point is the design. It's entirely utilitarian: it gets the job done, but it doesn't worry about how it looks doing so. Up against a PS Vita or an iPad Air, the 2DS looks like an oddly proportioned piece of plastic. That won't matter for everyone; if you just want a cheap way to play the new Pokemon game, this is your best option.

But if you don't like being the center of attention, you may want to spend an extra $40.