British police have seized a 3D printer and components "suspected to be a 3D plastic magazine and trigger." Police made what they're calling a "milestone" discovery when executing a number of warrants in the Manchester suburb of Baguley late last night. The Greater Manchester Police Department says it's the first seizure of this kind in the UK, where personal firearms are illegal without a hard-to-obtain permit. The parts have been sent for forensic analysis to establish if they could be used to construct a genuine firearm, and a man has been arrested "on suspicion of making gunpowder." 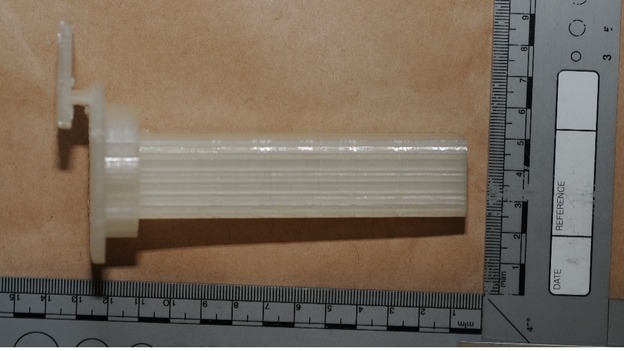 This component, believed to be a magazine, was seized by British police.

In a prepared statement, Detective Inspector Chris Mossop called the discovery "really significant." Mossop says that, if the components are genuine, "then it demonstrates that organized crime groups are acquiring technology that can be bought on the high street to produce the next generation of weapons." He goes on to note that, as the components are plastic, they are easy to conceal and smuggle past current detection methods. "A lot more work needs to be done to understand the technology and the scale of the problem." 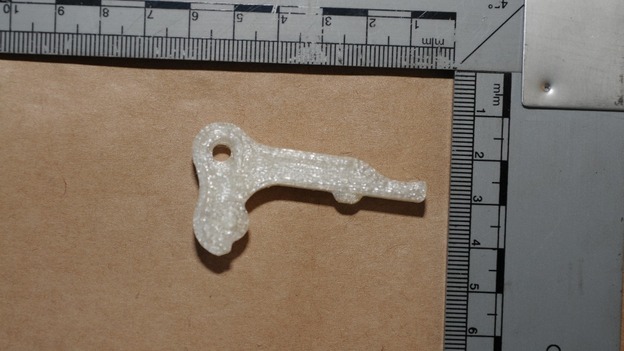 Another seized component, believed to be part of a trigger mechanism.

The world's first 3D-printed gun, Defense Distributed's "Liberator," has been the subject of intense debate and legal wrangling. Although the company was successful in gaining a license to make and sell firearms in the US, that license doesn't extend to the UK, where weapons are tightly controlled. Images released by the police don't depict any of the components that make up the Liberator, though, raising the question of what the suspect was attempting to build, and from which blueprints the components were printed from.

Update: In what could turn out to be a major embarrassment for the Greater Manchester Police Department, the "3D-printed gun parts" could well be spare parts for a printer. Verge user Theobald02 points out that the parts look like upgrades to the Replicator 2 (the printer pictured above, which was also seized by the police). The "trigger" is part of an extruder, while the "magazine" is a holder for non-Makerbot filament spools.

The Greater Manchester Police announced news of the seizure this morning under the headline "Component parts for UK's first 3D gun seized." As Theobald02 let us know, whether the man arrested had nefarious intentions or not, "these parts are not lethal unless you swallow them."

We reached out to the Greater Manchester Police Department for comment on today's events, and were given the following statement, attributed to Assistant Chief Constable Steve Heywood:

"We need to be absolutely clear that at that this stage, we cannot categorically say we have recovered the component parts for a 3D gun.

What we have seized are items that need further forensic testing by national ballistics experts to establish whether they can be used in the construction of a genuine, viable firearm.

We will also be conducting a thorough analysis of computers we have recovered to establish any evidence of a blueprint on how to construct such a weapon.

Clearly the fact we have seized a 3D printer and have intelligence about the possible production of a weapon using this technology is of concern. It is prudent we establish exactly what these parts can be used for and whether they pose any threat.

What this has also done is open up a wider debate about the emerging threat these next generation of weapons might pose.

The worrying thing is for me is that these printers can be used to make certain components of guns, while others can be legitimately ordered over the Internet without arousing suspicion. When put together, this could allow a person to construct a firearm in their own home.

Thanks to Challenger, which is the biggest ever multi-agency response to organized crime in Greater Manchester's history, we now have even greater resources to combat any emerging threats posed by organized criminal gangs, which may include the production of these weapons.Under Challenger we will a multi-agency action plan for every single organized crime group in Manchester and we will target these networks from every possible angle, hitting them where it hurts."