The psychedelic and grotesque proto-GIFs of the 19th century

Meet the man preserving the lost masterpieces of early animation

Share All sharing options for: The psychedelic and grotesque proto-GIFs of the 19th century

Richard Balzer’s love affair began about 40 years ago, when he saw his first magic lantern — an early image projector invented in the 1600s. The experience would prove transformative.

Balzer, a New York native, was working abroad as a photographer at the time, but the encounter kindled a dormant passion that would persist for decades. He began scouring for magic lanterns at flea markets across London and Paris, and soon expanded his collection as he learned more about early animation technology. Today, he has thousands of illustrations and machines at his Boston-area home, including phenakistoscopes, praxinoscopes, and zoetropes — all "optic toys" that were, in effect, the world’s first GIF-making machines.

Balzer, 69, has spent the past five years curating a virtual museum of his collection online, publishing detailed drawings, diagrams, and photographs of the 19th-century animations he’s accumulated over the years. More recently, he began converting these curiosities into GIFs and publishing them to his Tumblr, allowing 21st-century viewers to see what early animation looked like before the dawn of cinema and modern photography. The results are equal parts mesmerizing and grotesque.

Belgian physicist Joseph Plateau is widely credited with inventing the phenakistoscope in 1832 as part of a study on how the eye perceives illusions. The device consists of a circular disc that spins around a vertical axis. Plateau and other artists would draw a series of still images around the disc’s center and cut equally spaced slits around its edges. The viewer would then stand behind the disc, spin it around its handle, and stare at its reflection in the mirror. The slits effectively acted as shutters, keeping the images from blurring together and resulting in what appeared to be a fluid, looped animation.

Plateau's experiment was born purely out of scientific curiosity, though it soon transformed into a more common form of commercialized entertainment, marking what Balzer calls "a confluence of science and fun." Plateau himself illustrated many of the phenakistoscope discs, and many other followed suit, designing toys for both adults and children. Although some featured rather mundane imagery, others were more psychedelic.

"I don't know if he did any LSD back then," Balzer laughs, referring to Plateau's illustration work. "But there’s something very trippy about it."

Phenakistoscope viewing was a decidedly solitary experience but the zoetrope, invented one year later, offered something more communal. The device used the same illusory techniques as Plateau's machine, applying them instead to a cylindrical drum. Artists would draw different phases of an animation on one long strip, which would then be laid along the inside of the cylinder. When the drum was spun, viewers could gather around it to see the images come to life. 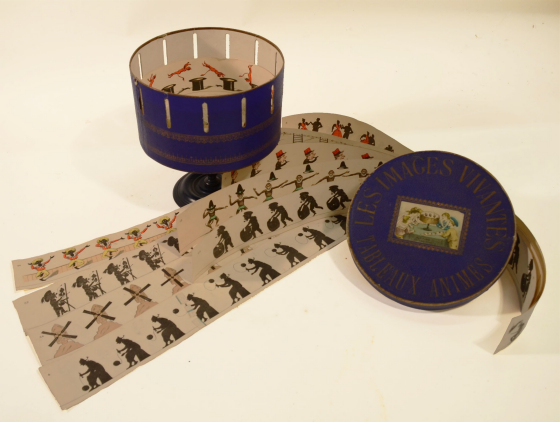 A zoetrope disc and strip

Balzer, who works as an organizational consultant and is a senior fellow at the Harvard Kennedy School, says he decided to digitize his collection because he wanted to share it with larger audiences.

"When you talk about it it’s one thing," he tells The Verge. "When you can get someone to see what a phenakistoscope looks like, they love it."

But bringing them to life online proved to be somewhat challenging. Brian Duffy, a Los Angeles-based animator, began working with Balzer in 2008 after graduating from art school in Boston. Balzer had published a Craigslist post asking for help on his website, and the 26-year-old Duffy proved to be the perfect fit. He began converting the collection into GIFs and posting them to Tumblr two years ago, and he continues to post one new animation every week.

For phenakistoscope animations, the process was rather straightforward. Working out of the refurbished barn where Balzer keeps his collection, Duffy would photograph each illustration and then sequence it in Photoshop to create a GIF. The zoetropes proved more difficult because they involved long strips measuring 2 feet in length rather than simple circles.

The most challenging aspect, Duffy says, was the timing. Unlike contemporary cinema, which largely operates under the same 24-frame-per-second standard, the early animations in Balzer’s collection unfolded at different rates.

"It was a lot of trial and error," he says. "If it’s too fast it looks like a blur, and if it’s too slow it just doesn’t work."

Duffy used to work with Balzer on a weekly basis, and describes the sessions as "half photography, half history lesson."

"We have a lot of fun," Duffy tells The Verge. "We'll work together for a couple hours, we’ll put on some music." Underscoring every meeting, he adds, are Balzer's tangential monologues about the history behind every item they uncover. "He’s a walking encyclopedia," Duffy says.

Six strips for the praxinoscope, a direct descendent of the zoetrope. Émile Reynaud (creator), France, 1880.

The two don't collaborate as frequently as they did before Duffy moved to California last year, though they still meet up whenever they’re in Boston together, and collect photographs for Duffy to process back in Los Angeles.

"these are just extraordinary feats of animation."

There's still a lot of work to be done, too. Balzer has so far digitized just a fraction of his collection, and although he doesn't collect optical toys or magic lanterns as avidly as he used to, he's still very much devoted to the hobby. Just hours after speaking to The Verge by phone on Thursday afternoon he boarded a plane back to England for a magic lantern convention in Birmingham, where his odyssey began four decades earlier.

Balzer refrains from theorizing about how his archival work may influence others, or what it might say about digital art and visual vocabulary today, noting that there are several other organizations undertaking similar efforts. His goal, he says, is to simply share his passion with as wide an audience as possible while preserving works of art that may have otherwise been forgotten.

"I mean, these are just extraordinary feats of animation that took place more than 150 years ago," he says. "And if you're just holding on to them, I think you should share them with other people."

All images provided courtesy of the Richard Balzer Collection.