Ever since Apple introduced its high-resolution Retina displays, it’s been a dream to see one put inside a MacBook Air. We’re not there just yet, but Apple got closer to that reality than ever before this week, trimming down its 13-inch MacBook Pro and lowering its price so that the base model is just $200 more than the Air. That sounds like a pretty great start, but Windows ultrabooks have been heading that way too. We’re checking out how Apple’s slimmest high-res laptop stands up to some of its biggest competitors on Windows. 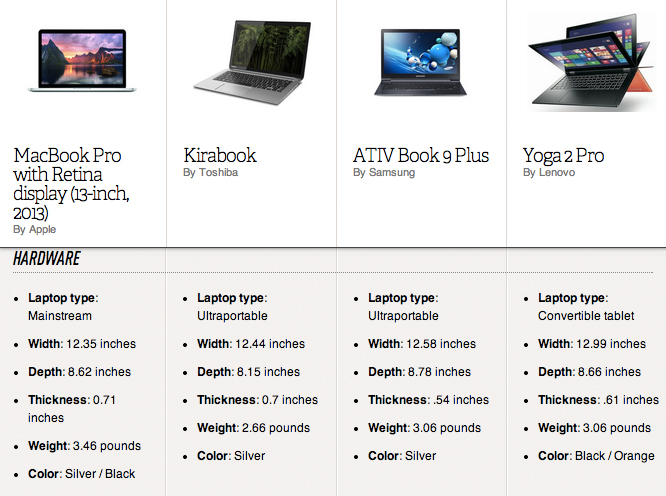 Toshiba, Samsung, and Lenovo are all shipping ultrabooks that match or beat the 13-inch MacBook Pro’s resolution. Both Toshiba and Samsung's laptops are more expensive than the $1,299 Pro though, with Samsung’s ATIV Book 9 Plus costing slightly more at $1,399 and Toshiba’s Kirabook coming in much higher at $1,599. There's a good chance that this is no accident. Samsung recently undercut the old pricing of Apple's MacBook Pros, and now Apple seems to be striking back. But there’s a reason Apple’s price is so low: to get there, it had to cut out some of the power from last year’s model.

Lenovo's competitor, the Yoga 2 Pro, falls into a similar situation. Its base RAM and storage match the MacBook Pro, but paying more can double them up. The big difference is that at that configuration Lenovo's laptop, despite an MSRP of $1,399, can be found for closer to $1,149.00, albeit with a slower processor than what's found in the Pro at that level. Even so, it makes the pricing of just about every laptop above it look a little out of place.

That all puts the 13-inch MacBook Pro in an interesting position, at least for the operating-system agnostic buyer. It’s easy to see its base model as a flashier version of the MacBook Air: it isn’t all-powerful like the Pro’s higher-end models, but it isn’t all that far removed from the lower price of the Air. That means its base model isn’t directly battling the Kirabook, just offering an intermediate step up from the Air. And in a lot of ways that’s a very attractive proposition: it’s a little heavier and a little bigger, but its display is something to marvel at.

As for choosing between the set of lower-priced, high-resolution notebooks, Samsung’s ATIV Book comes ahead with a much denser resolution than the MacBook Pro, but it falls far behind on its processor’s speed. But when looking between the Yoga 2 Pro and the MacBook Pro, the situation is trickier. Though their specs don't match up perfectly, there's a big price gap in Lenovo's favor.

(You might also think that HP’s Spectre 13 Ultrabook or Envy 14 TouchSmart Ultrabook would make for great competitors to the Pro because of their high-resolution displays — you’d be right, but HP doesn’t appear to be shipping either of them with those display options right now, nor has it detailed their pricing. We’ve reached out to learn more.)

While Samsung’s option may come in $100 above the Pro, it’s a little bit thinner and a little bit lighter, and also includes a touchscreen for Windows 8. And even without upgrading the Yoga 2 Pro, it only runs for $1,049.00, making Apple's pricing really begin to stand out. So while Apple’s created a great option between its higher priced Pros and its more popular Airs, the 13-inch Pro is far from the obvious choice just yet when picking a high-res laptop — and many competitors haven’t even gotten started.

As you may have heard, there were a number of other exciting products announced this week:

If you want to learn more about any of the products mentioned above, all of our information on them can be found through the database box located beneath the article. For more on laptops, cameras, and just about every product around, you can check out the full Verge Database right here. (This article has been updated to include details on the Yoga 2 Pro and to note that the Ativ Book 9 Plus includes a Haswell processor.)