Illegal gold is destroying the Amazon

Illegal gold is destroying the Amazon

Gold has long been synonymous with wealth and prosperity, but the shiny precious metal has taken on a far darker shade in Peru. Years of informal and illegal mining have wreaked havoc on the country's tropical rainforests, and according to a new study from the Carnegie Institution of Science and Peru's Ministry of the Environment, the situation is more dire than previously believed.

The research, published today in the Proceedings of the National Academy of Sciences, puts the scale of Peru's artisanal mining industry in harsh new light. Combining satellite imagery with survey data, lead author Greg Asner and his team of scientists found that land used for illegal gold mines increased by 400 percent between 1999 and 2012, and that deforestation rates have tripled since the 2008 global financial crisis, when gold prices skyrocketed.

Gold mining has accelerated across the western Amazon in recent years, touching countries like Bolivia, Colombia, and Ecuador; but the industry’s epicenter is in the Peruvian state of Madre de Dios, a region known for its lush rain forests and biodiversity. Around 50,000 small-scale miners are currently operating in the region, according to federal estimates, and most do so without permits or government oversight. Instead, they work under the control of a small group of so-called "gold lords," who obtained land rights, or concessions, from regional administrators.

"traditional satellite methods were blind to at least half of the mines."

Peru's gold lords are known to run their mines with an iron fist, reaping benefits off the backs of forced labor, violence, and child workers. They’ve also translated their riches into political influence, and have so far thwarted all attempts at federal oversight. As a result, there's very little hard data on the environmental impacts, or even the extent of Peru's mining industry. And based on Carnegie's findings, the few studies that have been conducted so far grossly underestimated its scale.

"Past studies were only able to detect mines of a certain large size," Asner tells The Verge. "The new technique we use is so resolute that it more than doubles the rate of gold mining compared to past reports that used traditional satellite methods, which were blind to at least half of the mines." 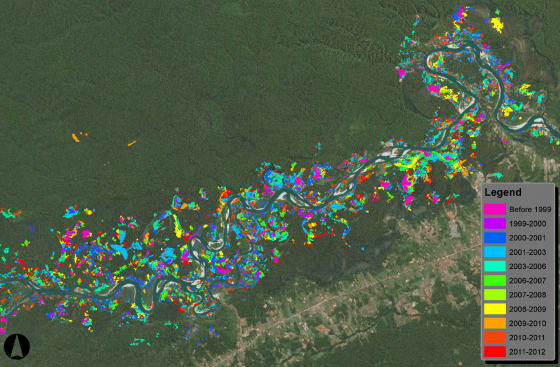 The key, Asner says, was Carnegie's advanced imaging technology. Working in collaboration with the Peruvian Ministry of Environment, Asner and his team surveyed Madre de Dios with the Carnegie Airborne Observatory, an airplane with an onboard laboratory. The plane was also equipped with lidar imaging technology (short for "Laser Imaging, Detection, and Ranging"), which scans areas with lasers to create detailed topographical maps in 3D. (Asner likens it to an MRI scan for land.)

Lidar allowed the researchers to map the region in high detail, exposing the thousands of small mines that other studies had missed. It was also combined with data gathered by an imaging spectrometer to provide what Asner calls "exquisitely detailed information" on both deforestation levels and the chemical impacts of Peru's mining.

"For example, if mining is putting suspended sediment into waters, we can see that sediment and understand its composition," he explains.

Once the plane surveyed a small area, Asner and his team programmed a satellite system known as CLASlite to apply the same methods to the entire region. They then compared these findings to previously collected satellite data, and the results were startling. Prior to the 2008 crisis, gold miners were tearing down rainforest at a rate of 5,350 acres per year. After the crisis, that number jumped to 15,180 acres.

Miners typically extract gold by digging deep craters in cleared areas, often delving as far as 10 meters below the surface. They then blast the crater with pressurized water to carve away the soil, before draining the area across mats designed to sift out tiny gold flakes. 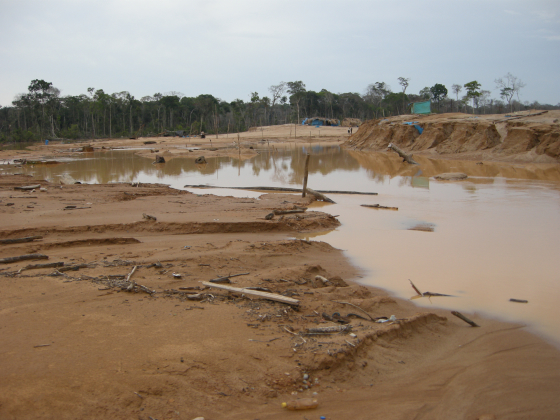 This process poses obvious threats to Peru's rainforest, and the sediment it releases into rivers can have devastating effects on water life. But perhaps most deadly is the final step, which involves dousing the flakes with mercury — a neurotoxin — and then burning them. This results in heavy gold nuggets, but it also holds disastrous consequences for the local ecosystem and food chain.

According to an earlier report from the Carnegie Amazon Mercury Project, Peru's informal miners combine to release 30 tons of mercury into the country’s rivers and lakes every year. Children in Madre de Dios were found to have mercury levels that were, on average, five times higher than the limit considered safe by the World Health Organization; some locals' mercury levels were as high as 34 times that limit.

"I haven't seen anything this bad."

The industry poses serious social risks, as well. A September report from international rights group Verité found widespread cases of abuse at Peru’s informal gold mines, including child labor and sexual exploitation. Verité estimates that tens of thousands of children work in the mines, turning the region into a bastion of forced labor.

"Verité has done research on forced labor in places like Bangladesh, Guatemala, Bolivia, Liberia and the US," Quinn Kepes, the report's lead researcher, said in a statement. "I haven't seen anything this bad."

Efforts to crack down on illegal mining have faced stiff resistance from gold lords, who are known to control regional governments through bribery and corruption. The federal government recently established tougher penalties for offenders and has begun destroying thousands of mines located near protected areas, but attempts to legitimize the industry have so far fallen short.

"Nobody should buy one gram of this jungle gold."

Complicating matters further is the fact that Peru's illegal gold market is nearly impossible to trace. Experts say most gold is laundered through legitimate businesses, and although some reports have identified Switzerland as a major destination, officials are still working to untangle the supply chain.

Peru's Environment Ministry hopes today's report will push officials to take more urgent action, now that they have solid (and alarming) data to underpin their efforts.

"Finally, we have very detailed and accurate data that we can turn into government action," Ernesto Raez Luna, a senior advisor in the Peruvian Ministry of Environment and co-author of the Carnegie study, said in a statement released Monday. "Nobody should buy one gram of this jungle gold. The mining must be stopped."