In late 2012, Vikas Gupta left his job as head of the consumer payments division at Google and set out to discover what he would do with the rest of his life. He'd recently had a daughter, and he knew his next venture would involve helping kids. Then he chanced across an article about Estonia, and how that country begins teaching programming to all children in first grade. He did a little research into the state of computer science education in America and was shocked to find how rare it was. So he set out to create a compelling way for children as young as four or five to start learning basic coding concepts.

The result was Play-i, a new startup building robots that it hopes will teach children about programming through play. The company is launching a crowdfunding campaign today to raise $250,000 for its first two models. "Thinking back on my own life, I began learning computer science at 14. I couldn’t imagine absorbing those programming concepts, at least the way I was taught them, at an early age," says Gupta, who serves as Play-i's CEO. "But research from MIT and Tufts showed pre-schoolers can grasp programming concepts, most just don’t have the right tools or framework provided to them."

The team at Play-i decided to avoid abstract concepts and the traditional focus on written code and syntax that are the core elements of most common programming languages today. "A lot of coding is about putting things in a sequence," says Gupta. "Ask a four- or five-year-old kid to write out a sequence, and they have trouble organizing a long string of commands. But if you reframe that as a song with lyrics, or a story with a narrative, children that age can create and remember long, complex sequences."

Kids interact with Play-i's robots, Yana and Bo, by giving them instructions. This can be through a tablet or smartphone, where they can drag and drop a sequence of commands. "As they do this, we can begin to introduce some other basic elements of coding, like the concept of loops, or an 'if this than that' instruction," says Gupta. Bo, which can play music on a xylophone, also responds to physical commands. "You can move him, and he will remember that motion, store it as a command, and allow you to play it back or insert it into a sequence." 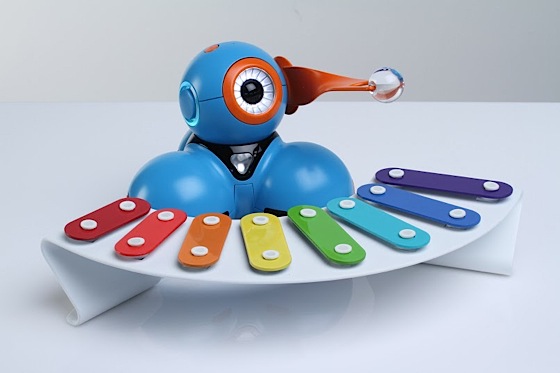 Gupta assembled a team of hardware experts to help him build Play-i's robots. Co-founder Saurabh Gupta, no relation, is a former engineering manager at Apple who helped design and build 10 generations of iPods. And co-founder Mikal Greaves is a former of employee of Frog Design, where he led the engineering team on projects for Motorola, Disney, and Ford. "We're all programmers and engineers passionate about technology, but above all, we're parents," says Gupta. "We knew the biggest engineering challenge was keeping the robots affordable."

For the crowdfunding campaign launching today, backers will be able to receive Yana for $49, Bo for $149, and the pair for $189. The final retail price after the campaign will likely be higher. Yana is cheaper than Bo because she cannot be remotely controlled to move.

A path to a lifetime of programming

It remains to be see whether or not kids who play with these robots will actually show better programming skills than their peers. Yana and Bo are based on academic research, but they haven't been proven in the field. "We are crafting a new language that we hope will open up this world to children," says Gupta. The key, Gupta believes, is making sure children can follow their curiosity as far as it leads them. "When they assign the command, so that when they shake the robot, it roars like a lion, that is actually a subroutine which I have given the name, image and sound of 'lion.'"

Kids who wonder how that command works can actually look into the code behind it and learn how to create their own versions. Play-i says its robots will work with drag-and-drop programming languages like Scratch and Blockly, basic ones like C, and even more difficult languages like Python. "We hope Yana and Bo set them down the path to a lifetime of programming," says Gupta. "And we plan provide them any tools they might need along the way."