We may be constantly staring into our phones and laptops, but Livescribe CEO Gilles Bouchard says pen and paper are more popular than ever — and he has data to back it up. We want to write and draw the way we always have, he says, but we also want all the sharing, instant access, and searchability that come with our many apps and websites. So Bouchard and Livescribe set out to build a device to bridge that gap, and today it's announcing the result — the new Livescribe 3.

Livescribe pens have long favored form over function — last year's Sky was a tiny computer but a huge, awkward pen — so Bouchard and his team decided first and foremost that the Livescribe 3 would be a high-end pen. For the first time ever, the company worked with a pen designer, and the resulting black and chrome device is beautiful, classy, expensive-looking, and finally feels like a writing tool rather than a mini-computer. On one end is a simple capacitive stylus, on the other an ink tip that reveals itself with a twist. You might never notice it's not just a normal pen, but when you use Livescribe's notebooks and turn on your iPad, it becomes something much more futuristic.

Livescribe is still for digitizing your notes – but it's smarter now

The app is beautiful, simple, and surprisingly versatile. It recognizes everything you write in discrete sections, treating pages as pages but also phone numbers and addresses as their own entities, searchable and sortable not only by page but by time and by their content. Write a phone number, and seconds later you can add it to your phone book with just one tap. Write an address, sync it, tap it, and view it in Maps. You can select snippets or pages and share them as PDFs, or save them quickly to other apps.

There's almost no technology in the pen itself — everything from the microphone to the internet connection is stored in your iOS device (Android support is coming soon). That's how the company made such a small, comfortable device, but it also means you'll always need a phone to capture audio or sync data. The pen connects via Bluetooth, and constantly sends data; anything I wrote showed up on my connected iPad after only a second or so. The pen's battery is rated to last 14 hours, though even when it's "dead" it's still a pen; your data syncs when you connect it next.

For $149.95 the Livescribe 3 is easily the company's most mainstream product yet — ultimately, it's a great pen that just happens to have a bunch of digital features if you want them. Screens may be taking over the world, but pen and paper's not dead yet. 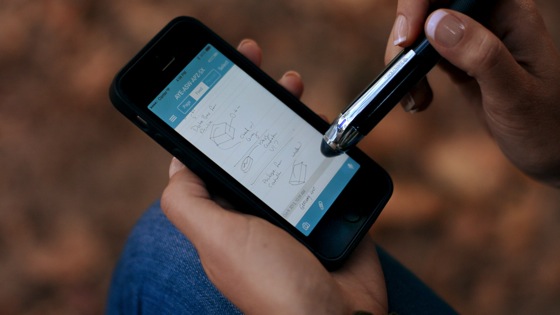