Here comes a special boy: 'Achewood' is back, but TV isn't ready

Here comes a special boy: 'Achewood' is back, but TV isn't ready

The cult-hit web comic is smarter than everything on television, so why can't it get a show?

About five years ago, I decided to check out the cult-hit web comic Achewood because my brother bought a weird sweatshirt. It had a picture of an animal that looked like a penis wearing pants, and it said "HERE COMES A SPECIAL BOY." My brother doesn’t usually go for lowbrow humor, so I started reading the strip — and learned that the thing is a five-year-old otter named Phillipe, not a penis, and the quote was from a pair of talking shoes his mother gave him.

Welcome to the world of Achewood Court, populated by characters based on author Chris Onstad’s ex-wife’s stuffed animals. Achewood debuted in 2001 and soon caught fire, accrued a loving fan base, and was named Best Graphic Novel by Time in 2007.

But by late 2010, Onstad started posting less frequently. The strip sputtered, was revived, then died again. Fans were crushed. Gradually, they accepted the new Achewood-less reality.

Then in February of 2013, Onstad announced he was back.

Readers, traumatized by the strip’s disappearance, are careful not to get too excited. But new comics started appearing every Friday — funny, offbeat comics, unlike some of the darker strips that appeared while Onstad was going through a divorce and struggling with burnout.

Achewood hasn’t missed a week since August 9th. Even more exciting, Onstad is resurrecting his creative work in a new format: an animated TV show.

"I hope every cartoonist aspires to animation," Onstad tells The Verge in an email. "I've wanted to do animation since the first day I started drawing. The wealth of tools and control you have, from timing to voice to music … it's like comparing a dog in manacles to MacGyver locked in a Home Depot."

Unfortunately, the television industry isn’t quite ready for Achewood. Onstad flew to Los Angeles to pitch a five-minute sizzle reel and the Achewood "bible," a book explaining the comic’s insanely detailed universe. He talked to five of the top cable networks, but no one bit.

"It's like comparing a dog in manacles to MacGyver locked in a Home Depot."

"A couple places seemed interested, but there is a lot of hokum and jive in the process of shopping a TV show," Onstad says. "Most networks have a shopping list for the season, or a format they're already looking for — we didn't fit any of them this time around."

The executives’ reaction is puzzling given Achewood’s proven traction and the sheer quality of the comic. Onstad started writing Achewood casually after he was laid off and given a severance package from his Bay Area job. Prior to that, he was an editor and illustrator for Stanford’s humor magazine, where he must have refined his voice; Achewood was extremely cohesive right from the beginning. Every character is distinctly funny and everyone has a backstory. The drawings are great, but simple — the dialogue, written in a different vernacular for each character, is the best part.

Another thing Onstad does really well is introduce made-up things — like bio-copters, which read snippets of People Magazine to organic crops; The Great Outdoor Fight; the tragically beautiful performance artist Cartilage Head; the concept of a childhood drum — and have his characters all react to it as if it’s an established thing that everyone in their alternative world is familiar with. These ideas all have perfect parallels in modern life and culture, so you always feel like you know intimately what they’re talking about.

These made-up ideas all have parallels in modern life

Most of Achewood is about the mundane daily activities of the characters, who throw parties, have internet relationships, start Subway franchises, and take road trips. They go to heaven, hell, and the moon. They time travel and produce platinum albums.

Onstad has a few other tricks that make Achewood distinctive. He relies heavily on pop culture references, French cuisine, and obtuse, often made-up slang. The site TV Tropes notes that Achewood relies on "Genius Bonus," inside jokes buried where only insiders can find them.

"Achewood is transcendent," says Cohen, a fan and fellow comic writer who asked not to use his last name, in an email to The Verge. "On the surface there’s his obvious genius of phrasing and timing that’s unlike anything before or since. He’s also able to convey more with a raised eyebrow than anybody — part of that’s the minimalism of the art; when stuff is simple minor changes get magnified … It’s also just plain the funniest goddamned thing there is, in a way that’s hard to objectively qualify without getting into a really tedious (for some) discussion about discourse and dialogue mechanics and subversion." 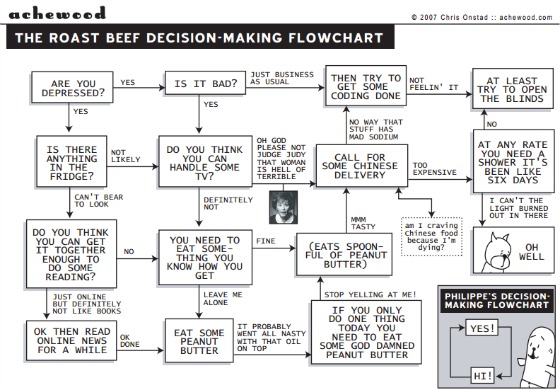 But Achewood, which just had its 12th birthday, is more than just a comic strip. There’s also an advice column, 13 first-person character blogs, several e-books written by the characters, an Achewood Court zine, a cookbook, and a computer program to calculate when to buy eggs. Onstad developed one of his most popular story arcs, "The Great Outdoor Fight," into a book for Dark Horse Comics, along with two annotated collections of Achewood strips.

"It's impossible to sum it up because it's an entire world. It'd be like people asking you, ‘Oh, what's planet earth like,’" says Dan McGloughlin, a friend of Onstad’s and a fan of Achewood. "You’d be like, ‘There's these people and they all do different things, sometimes it’s funny and sometimes it’s sad, and that's what earth is about.’"

Onstad’s voluminous output is part of the reason why he had to take time off after almost 10 years of writing. He also started doing readings and book signings. He was able to make a modest living by selling T-shirts and other merchandise and charging a fee to subscribers who would see new content first. At Achewood’s peak, he was posting between four and five strips a week (each strip takes between 8 and 16 hours).

"For a decade and more, every waking hour of my life involved Achewood, trying to make Achewood great, trying to repeatedly find that elusive twist or beat or turn of phrase that defined it, to raise the bar I felt I'd set, every goddamned day," Onstad says. "It was insanely stressful. It was backbreaking, and income was always uncertain, and barely adequate at the best of times. It destroyed my marriage, my health, and what might have been some kind of security had I chosen a standard career." 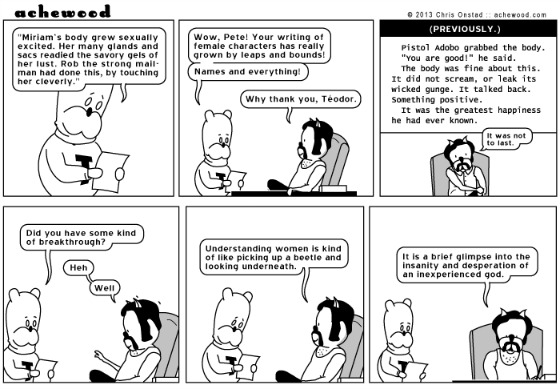 One of the newer Achewood strips.

The Portland-based writer seems to have emerged from whatever darkness took him away from the comic for so long. He is now writing a food column for a local alt-weekly, working on music projects, and "developing food and beverage products." He wants to write a book, eventually, and also plans to start taking art commissions. Is he worried about burning out again? "No. I've rearranged my life and my philosophies appropriately," he says.

Fans better hope he’s right, because it sounds like Achewood: The TV Show has a long way to go. Onstad and his production company are working on a new pitch. They’ve built the software models and developed a workflow to create the cartoon using motion-capture actors, a process Onstad says is faster even than South Park’s famously quick turnaround.

The Portland writer seems to have emerged from the darkness

"I don't think we nailed the tone and humor of Achewood by any means," Onstad says. "I'm excited to write version two, knowing what I know now about how all that work, all those actors, engineers, and producers come together, which is a hell of a lot."

The sizzle reel that Onstad put together is delightful, but it’s obviously a rough draft. (Check out the black-and-white Achewood Christmas card for an even earlier version of the animation.) The format of the show is yet to be determined: will it be comic strip-length vignettes, or longer episodes? Onstad isn’t sure, but he seems reinvigorated by the challenge. "It was one of the most fascinating periods of my life," he says of the pitching process. Now it’s time for round two.