Age of the smartwatch: the designer behind Lytro and Fitbit on our wearable future

Age of the smartwatch: the designer behind Lytro and Fitbit on our wearable future

Wearable technology is an exploding market. A trickle of devices ranging from fitness trackers, to smartwatches, to identification tools are rapidly turning into a flood, with many more expected for 2014. What separates this category from so many other forms of technology is how personal it is — not only are wearables tools, they also act as ornaments or jewelry. Design plays a crucial role — if something is ugly, unattractive, or just uncomfortable, are most people likely to wear it everywhere they go?

Gadi Amit is the principal designer and one of the founders of NewDealDesign, an award-winning San Francisco firm that has designed a number of consumer products over the past decade. Most recently, NewDealDesign was responsible for the line of Fitbit fitness trackers (including the new Fitbit Force) and the Lytro light-field camera. Amit and his firm have been working hard at building devices that answer those key questions: how do we make a device that is functional, attractive, and durable all at the same time?

"At NewDeal, part of our method is the contrarian design — you thought you wanted to see this, but how about that too?" says Amit. If a client says they want a specific design or product, NewDeal will give them what they want, but also provide an alternative design that they might not have considered or might not even like. Typically, a gadget company might want NewDeal to build them a gadget, but that doesn’t always work when it comes to wearables.

"There’s obviously core technology that we’re trying to get into the product, but sometimes the human qualities push back."

"It’s a very interesting dialogue — there’s obviously core technology that we’re trying to get into the product, but sometimes the human qualities push back," notes Amit. For example, every feature has a tradeoff: is a larger battery truly useful in a wearable device if it no longer makes the product comfortable for the average person to wear?

NewDeal also gives care and attention to how the products actually behave when they are worn or used by people. "We don’t think that objects need to always declare to the world their state," says Amit, referring to the basic, simple displays he’s used on the Fitbit and other devices. "We want to have products that are very much at ease, flowing into your work and lifestyle, rather than being somewhat shouty."

Since wearables are objects that we actually wear, they can’t just look like a typical gadget. As with nice watches and fine pieces of jewerly, they need to posses an allure and inspire a sense of emotional connection with the wearer. A wearable device should be designed well enough that you would want to wear it even if it didn’t have any electronics in it. 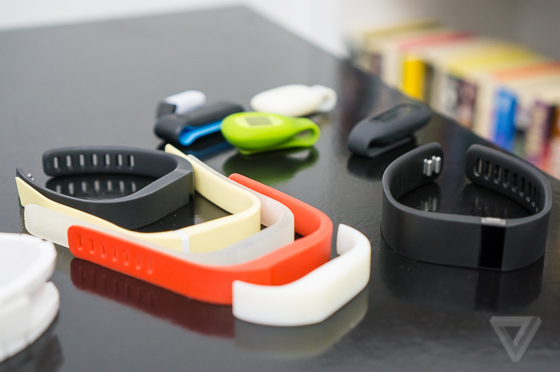 A few prototypes used in the design of Fitbit devices.

"If you use something for five years it is better than it breaking every few months," notes Amit. "If you create awesome products that people love, they will keep them and maybe you will save a few upgrade cycles in that way." Though there is a constant pressure to have the latest and greatest, the longer people keep their gadgets and use them, the better it is for the environment. Amit posits that one such solution could be to have a constant "shell" or exterior design, and then upgrade the internal components as new technology and capabilities are released.

But it’s not just hardware designers that are responsible for the rapid hardware upgrade-cycles we have today. "People lament that their devices are being discarded and changed, but the problem is actually software compatibility more than hardware in many cases," says Amit. "We should strive as an industry for a seven- or ten-year guaranteed performance on devices, so if I have a great design, it can be in the market for nearly 10 years."

"We should strive as an industry for a seven- or ten-year guaranteed performance on devices."

As wearable technology becomes a larger and larger part of our daily lives — Amit predicts that in just a few years, we could be wearing up to 10 different devices on a regular basis — their design becomes more and more paramount. It’s no longer just important to have the best technology in a product — it has to look and feel good. Good design has the potential to make us both fall in love with our gadgets and help curb the disposable mentality that has been fostered by the rapid pace of technological innovation. But it will take the entire industry to really get us there. As Amit asks at the end of our conversation, "How can we get design, and hardware, and software, and cloud services, [to all] stay relevant for seven or ten years as a good target?"