Can Google dominate live video with Hangouts on Air?

Can Google dominate live video with Hangouts on Air?

A big push to encroach on incumbents like Livestream and Ustream

Today, Google is announcing a big stack of features for Hangouts on Air, a grab bag of upgrades and improvements that theoretically add up to more than the sum of their parts. Hangouts on Air, which allows individuals and small groups of people to broadcast live from their laptops or phones, has becoming a surprisingly powerful tool not just for its users, but for Google's own image. High-profile live Hangouts with President Obama, astronauts, and Miley Cyrus have helped push the service into the spotlight and ostensibly garnered goodwill for not just Hangouts, but also Google+.

To build on that momentum, Google is updating Hangouts on Air with better production and video features for live shows, a new interface and extension platform, new organization tools to help find Hangouts in the sometimes-confusing world of Google+, and a few new toys for audiences to fiddle with while they watch. All together, Google is hoping that the features turn Hangouts on Air from a tool used by random celebrities and podcasters into something much bigger.

Finding Hangouts on Google+ should be easier

We spoke with Amit Fulay, a product manager for Google+ Hangouts, who says that since Hangouts on Air launched two years ago, the team initially focused on "getting the scale right." That meant working to integrate with YouTube Live's infrastructure and ensure it could not only handle millions of viewers, but also tens of thousands of broadcasters across a wide array of devices. The second year (and beyond) is all about building out the feature set.

Fulay categorizes all the new additions into three big buckets: "organization, beauty, and engagement." The first bucket, organization, is arguably one of the more important pieces to Google's puzzle. Or set of pieces, actually, as it involves creating a new kind of landing page on Google+ that offers a trailer, countdowns, RSVPs, and pre-show question and answers. Broadcasters can embed a hangout in any page, share the link to the Google+ page, or simply use the YouTube landing page — which shares some (but not all) of the same new features.

Google+ is a strange thing. It's the company's social network, yes, but it has also become something more than that, effectively the central hub for users' identities for Google's services. It's also a giant, catchall place where the company can host products that were either once separate or may theoretically have fit better elsewhere in the company's empire — a list that includes Photos and also Hangouts on Air.

Hangouts on Air itself is an equally strange thing — it's related to and part of a growing set of Google's services. In addition to being part of the aforementioned Google+, it has half a foot inside YouTube, a property that seems like a much more natural home for it. Hangouts on Air appear simultaneously on both Google+ pages and YouTube profiles before, during, and after airing. And, of course, it's essentially one and the same with the Hangouts app, which is used for private video conferencing and text chatting. If that's not enough confusion, note that Google says that Hangouts is "the future of Google Voice" and already offers some integration with it. It's a lot to try to keep track of, as all of these services overlap in sometimes mysterious ways.

In that context, "organization" is indeed the biggest challenge in making Hangouts on Air accessible for the masses. Not only does Google need to help users navigate through a Google+ interface that's still unfamiliar to the majority of internet users, it has to navigate within its own set of different properties. "What we've been doing over the past two years is actually working very closely with the YouTube team," admits Fulay. "We are trying to bring the two products together piece by piece. You'll see that vision materialize over time."

Some progress has been made. Hangouts on Air utilizes the same Content ID system that YouTube has for filtering out copyrighted content, and it also integrates the exact same comments on both sites thanks to a recent switchover. Rumors indicate that Hangouts will play a major role in the next version of Android as well, so perhaps the story will become clearer soon.

The new interface is much better

Assuming Google can help users navigate where Hangouts on Air live and what exactly it is, they'll be greeted with an updated product that may actually live up to the goal of "beauty" that Fulay cites. The new interface is much better, going full screen on desktop, iOS, and Android. It cuts away the browser chrome and makes the persistent thumbnails at the bottom more movable. It will work in HD for more broadcasters and does a better job accommodating low-bandwidth users than before.

The company is also introducing auto-enhance live video with an automatic filter and seven custom ones. Hangouts on Air will be able to soften skin, automatically adjust brightness, adjust color saturation, blur backgrounds, and more. It does it locally with the Hangouts plugin — Fulay says it adds between 5 and 7 percent to the processor load — which means the feature is currently limited to desktop users. 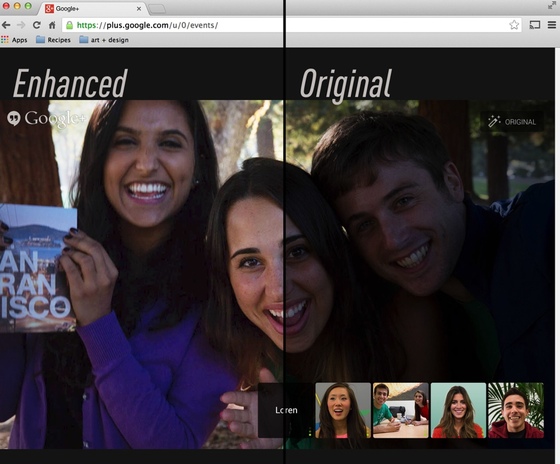 Lastly, Hangouts on Air is gearing up to add a bunch of audience engagement tools to be used before, during, and after a broadcast. Google already introduced a Q&A app, and now those questions can be submitted before a broadcast begins and looked over after it ends. Google has also created some bespoke apps for some of its partners — Fulay describes a shopping app the company made for a fashion designer. Hangouts on Air is now built on a new infrastructure that could accommodate other kinds of interactions — it's easy to imagine live polling, song requests, image submissions, and other audience tools.

Broadcasters also gain access to a new tool called "Control Room" which allows a producer to set audio levels, switch videos, and even boot users out of Hangouts. Fulay says that the tool has already been put into use by Al Jazeera and HuffPost Live, and believes that it's the kind of tool that could make Hangouts on Air a genuine option for television broadcasters.

"What would American Idol be if these folks were singing all by themselves?"

"We always talk about live and use American Idol as an example," says Fulay, "What would American Idol be if these folks were singing all by themselves?" While the team hasn't (yet) put up "What Would Simon Cowell Do?" posters on their walls, Google's ambition seems to be making Hangouts on Air a different kind of live medium. It's ambitious, perhaps overly so, especially since the path for getting there is paved with a set of seemingly random features and celebrity endorsements.

Those endorsements are coming, too. Alongside the aforementioned presidential Hangout, look for a Hunger Games Hangout with the entire cast on November 6th and many more media tie-ins after that. Fulay waxes poetic about how Hangouts on Air has altered the course of elections in India and helped educators, but Google is also happy to tout the musicians who have used it to connect with fans. He uses the opportunity to take a swipe at Twitter. "Artists are liking this as a promotion vehicle, as opposed to, you know, 140 characters."

Google seems to believe that it can do for live video what YouTube did for recorded video — and that it can do it with a product that lives both on YouTube and Google+. It won't be easy. Zinging Twitter's character limitation is one thing — building a new media platform that directly competes with it for live content is quite another.