Can a phone last forever? Motorola's Project Ara aims to find out

Can a phone last forever? Motorola's Project Ara aims to find out

Upon hearing of Motorola’s Project Ara, it's easy to lapse into thinking about all the reasons why it'll be hard — almost impossible — to pull off: customers won't have incentive to buy new phones, modules will be too expensive; the list goes on. And if you can think of 30 reasons not to build such a thing, Motorola’s designers and engineers can probably come up with 300. But against all odds, they're doing it.

The "why" of Project Ara is an inspiring vision of a more sustainable and democratic smartphone. Motorola wants to lower barriers to entry for new companies and consumers alike while helping to build an ecosystem of versatile devices that don’t get discarded as soon as any one component breaks down. The same flexibility that you gain from having an interchangeable battery can be magnified if everything from the display and cameras to the applications processor and wireless radios is also user-upgradeable. By swimming upstream against the current of ever-greater integration and consolidation, Motorola’s venture aims to produce "a phone worth keeping."

Those words come from Dave Hakkens, the creator of Phonebloks, a grassroots community united by the desire to see modular phones become a reality. Having earned will.i.am’s unequivocal approbation earlier this month, Phonebloks is today getting a much more important boost from Motorola’s embrace of the concept. Hakkens envisions the practicalities of building a modular phone as a mix of Etsy and a software app-store. Hardware developers will offer up their wares and buyers will pick and choose the particular specs of their desired phone. Moto’s underpinning the whole thing by developing the first prototype device, and later providing the sweetly titled endos (short for "endoskeletons") upon which to mount your various components. Those will be joined by the release of Module Developer’s Kits and prizes for the most accomplished designs.

Hakkens tells The Verge that his major contribution has been to galvanize an otherwise dormant desire among smartphone users for longer-lasting, more flexible devices. His initial concept video was picked up by Reddit and clocked up over a million views within its first 24 hours on YouTube. "The first idea was to gather 500 people," says the Dutchman, but that goal was surpassed within moments. The concept’s viral popularity did more than just bring phonebloks.com down. It afforded Hakkens the opportunity to talk to big companies about collaborating on making Phonebloks a reality. He names Nokia, Intel, Qualcomm, Sennheiser, Jolla, Ubuntu, Firefox, and ZTE among the parties expressing interest, but ultimately chose Motorola for two key reasons.

"They are very good at technical development, I’m not. I have the support of this large community."

Firstly, Moto has been making phones for over 40 years and, as Hakkens puts it, "They are very good at technical development, I’m not." The other key attraction is Google’s "open way of thinking," which will be evident in the way Motorola and the Phonebloks community work together on Project Ara. The Phonebloks website and community, now numbering over 900,000 supporters, will serve as a gathering place where ideas can be shared and collaboration between individuals organized. Hakkens describes it as a more structured form of an online forum — where it’s not just a Wild West of random ideas, but good designs are voted on and then passed along to the engineers at Motorola. Keeping this dialog going between the big company driving the project and the people contributing to it will be Phonebloks’ key role going forward.

The openness of the entire project, both from Motorola and Phonebloks, is admirable. There’s no reason, for example, why other companies who make a similarly compelling pitch can’t be included, with Hakkens saying that "the more companies involved in the project the better." He also points out that Motorola is taking an unprecedented step in letting the public in on this project at such an early stage. 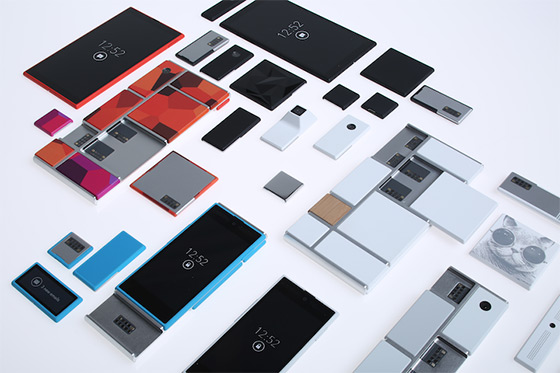 Typically, concept development is handled entirely behind closed doors — and Moto did have some modular handset designs brewing behind the scenes before partnering up with Phonebloks — but it was the popularity of this campaign that convinced the company to open up its efforts. Motorola is responsible for developing and standardizing the basic spec of the Phonebloks platform. It’ll then make all the necessary information available online so that hardware developers can pick it up and start building their own blocks and growing the ecosystem. Most importantly for Hakkens, working with Motorola "so people can have an influence on the development process is really unique."

Remember Modu? Neither does anyone else

While undeniably energizing and stirring, the Phonebloks vision still feels utopian. When asked about cost projections or how the module store would operate, Hakkens describes those practicalities as "the next next step." "A nice next step is to figure out," he says, "whether it is even possible, because no one’s ever really tried it before."

The exact Phonebloks concept hasn’t been tried, that’s true, but modular handsets have an ignoble history of sparking short bursts of interest before flaming out. The most recent such example was the Modu, a tiny, no-frills phone that plugged into various jackets to perform higher-order functions. It suffered from exactly the issue that threatens Project Ara today — a misalignment between the cost of extra modules and accessories and the price buyers are willing to pay. Scott Bicheno of Strategy Analytics worries about performance and cost disadvantages relative to fully integrated smartphones and raises the specter of a complacent marketplace, "with the mass-market likely to adopt an 'if it ain’t broke don’t fix it' view on messing around with components."

Still, these and other projects like Sony's QX lenses tap into a rich vein of unsated demand for modularity among smartphone owners. We want user-replaceable batteries and screens and chips because we tend to get attached to our devices. It’s emotionally easier to swap out a malfunctioning part than throw away the phone on which you composed your most heartfelt love missives or best haiku. And, even more importantly, it’s a less wasteful way to keep upgrading to the latest electronics.

"A nice next step is to figure out whether it is even possible."

Today, Phonebloks is making its big social splash with a Thunderclap — an automated, synchronized message posted to supporters’ Twitter, Facebook and / or Tumblr feeds — and looking to expand the community that has already helped turn Dave Hakkens’ wishful concept into a real project from a major phone maker. With nearly a million people signed up for the Thunderclap, it’s estimated that the social reach of that info blast will exceed 379 million. It’s a crowdfunding campaign where the only contribution you’re required to make is that of your voice. Tell the world you want "a phone worth keeping" and maybe, just maybe, the pieces will fit together to make it a reality.