Lenovo re-thought the laptop, bringing flexible displays to a variety of different notebooks, and has now turned its focus to the tablet. The new Yoga Tablet 8 and 10 appear almost book- or magazine-inspired, like the Sony Xperia Tablet S, with a round bulge along one edge to serve as a grip. The design itself isn't completely new — the new tablets look eerily similar to the Apple Wireless Keyboard — but the extra space allows Lenovo to pack the tablets full of battery life. Both devices will supposedly last 16 to 18 hours on a single charge, which Lenovo hopes will make these tablets stand out from the competition.

Both the 8-inch and 10-inch Yoga tablets feel solid and well-built, with a slightly textured backing and slim body, except for the cylindrical battery. The new shape is actually really comfortable to hold, especially the 8-inch model, which has a great grip for reading. Both tablets also have a kickstand that's a little hard to open but holds steady at any angle, unlike the limited two positions of the Surface Pro 2. There are two front-facing speakers as well, which have impressive audio quality and make movie watching on the Yoga tablets a pleasure. 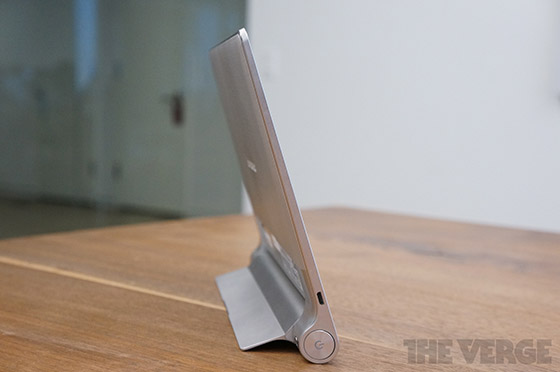 Both devices have an MT8125 SoC, usually seen in budget tablets, which run Android 4.2.2 on a modest quad-core 1.2GHz Cortex-A7 with 1GB of RAM. Lenovo has chosen a strange Android skin that more closely resembles iOS than Android, with apps covering the home screens rather than tucked inside an app launcher. Almost surprisingly, the OS feels fast and responsive, with impressive scrolling rendering in both the default browser and Chrome. Both tablets have low-res 1280 x 800 resolution screens, although both colors and viewing angles are fairly impressive.

Although 16 to 18 hours of battery life is definitely longer than any competing tablet, the protruding battery bump makes the devices slightly awkward travel companions. Lenovo has a protective case available for both sizes, which compensates for the extra bulge, but then it's no longer a slim and sleek tablet inside your bag. There are other minor annoyances as well, such as the kickstand partially blocking the camera lens when open and unusual twisting grip needed to open the stand.

The 8-inch Yoga Tablet, which costs $249, seems targeted directly at the $229 Nexus 7, offering a slightly bigger screen and possibly much longer battery life. The 10-inch tablet has an even more aggressive price point, costing just $299, compared to the $379 8.9-inch Amazon Kindle Fire HDX. The new designs are a definite departure from the established tablet form factor, but Lenovo proves it's not afraid to risk trying something new — and it's pulled it off before.