1Password for Mac gets first major overhaul in four years

1Password for Mac gets first major overhaul in four years

1Password is one of our favorite apps. The cross-platform password manager makes it a breeze to log into websites or get to our sensitive information, as you only have to remember a single master password to access all your data. However, the 1Password desktop client hasn't seen an update since 2009 — unless you count Retina Display support — and the latest OS X 10.9 Mavericks actually includes a built in iCloud Keychain that mimics some of 1Password's functions. It's not the first time that developer AgileBits has found itself at odds with Apple's walled garden, but the company's not going down without a fight.  The new 1Password 4 for Mac, launching today, brings a complete redesign.

There's a huge list of over 90 enhancements, according to the company, but the big ones are these: an interface overhaul "with Mavericks and simplicity in mind," enhanced security, and the new ability to create multiple password vaults and share them with friends or colleagues. You can also share individual items via email or iMessage. While 1Password traditionally syncs passwords and the like through Dropbox, you can now use iCloud as well, or if you'd rather not send data to the internet at all you can sync directly to an iPhone or iPad running 1Password 4 over Wi-Fi. 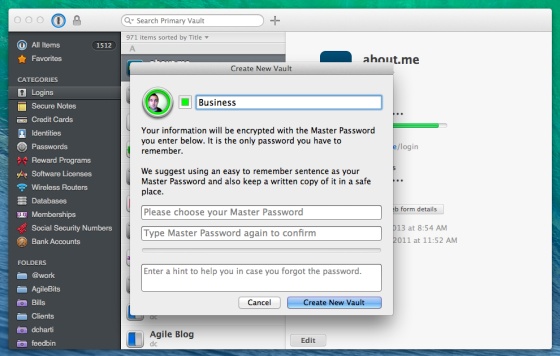 There's also 1Password Mini, which you can see in the picture at the very top: it's pretty self-descriptive, simply giving you access to your data from the menubar. Not last, and not least, 1Password says the new app includes a new browser extension which supports the Opera browser, and offers a consistent user interface across browsers thanks to Cocoa.

AgileBits says that anyone who purchased 1Password in 2013 or via the Mac App Store can get the new version for free. Other existing customers can get the upgrade for $24.99, and new customers for $39.99, for a limited time.