As TWTR, the company looks to raise $1 billion on the public markets

Twitter has filed paperwork with the Securities and Exchange Commission to become a public company, which will allow outside investors to buy and trade stock in the company in the coming months. The San Francisco company will trade under the symbol TWTR when it goes public, it revealed in the S-1 document it filed with the Securities and Exchange Commission. The S-1, which was made public today, said that Twitter has 215 million monthly active users but is not yet profitable. During the first six months of 2013 the company pulled in $253.6 million in revenue, but its net loss increased by 41 percent to $69.3 million.

There are two interesting numbers which will likely work in Twitter's favor. Only one third of its users are currently in the US, meaning it has plenty of room to grow at home. And 65 percent of its revenue comes from mobile advertising, besting its rivals like Facebook and LinkedIn. It can't boast big profits, as Facebook did when pitching its IPO. But Twitter does have a huge daily audience: 100 million people use the service every day.

The company is hoping to raise $1 billion in its IPO

The document positions Twitter as a central hub for global conversation, one used by some of the world's most influential people to inform, discuss, and even negotiate. It's a source for breaking news, links that are relevant to individual interests, and active discussion about live events. Twitter has also taken the lead in becoming a companion to live television. "We believe this makes Twitter the social soundtrack to life in the moment," the authors of the S-1 write.

More than 500 million tweets a day flow through the service, Twitter revealed. The company is hoping to raise $1 billion during the IPO. That could value the company at $15 billion, an analyst with PrivCo told the Associated Press. The offering will be led by Goldman Sachs, with other underwriters including Morgan Stanley, JP Morgan, Band of America Merrill Lynch, Deutsche Bank Securities, and CODE Advisors. 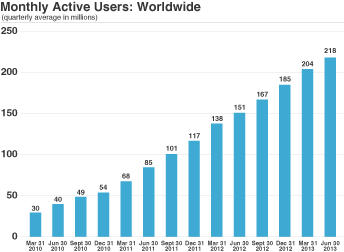 Along with basic metrics, the S-1 reveals several of Twitter's core challenges. Among them: ramping up global ad sales, fighting spam, and boosting engagement among users in the United States. The document also outlines several risks to Twitter's business, including competition from Facebook and others. Another risk described in the document: the threat that influential users, including world leaders, celebrities, athletes, and journalists, might turn to an alternative platform.

Twitter actually filed for its IPO with the SEC all the way back in July, but didn’t reveal its plans until September. Twitter did this by taking advantage of a new "confidential" IPO process made possible by the passage of the JOBS Act.

A premier global source of news and entertainment

Twitter hoped that by keeping its IPO confidential it could maintain a lower profile and avoid the disastrous, overhyped offering put on by its rival, Facebook. According to reports, the company has also done a good job helping employees and early investors to sell their equity before the IPO, meaning there won’t be a huge glut of stockholders trying to move their shares on the first day. Because of the confidential IPO filing, Twitter has had time to work privately with the SEC to shape the language and numbers in its S1. 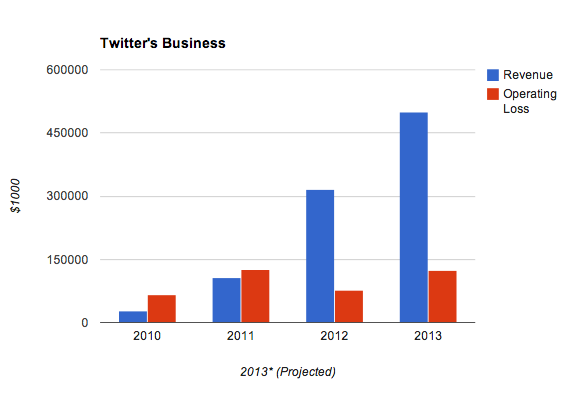 The seven-year-old company, which began as a side project at a failed podcasting startup, has since become a premier global source of news and entertainment. The company has more than 2,000 employees, up from 200 in early 2010.

Now Twitter will begin making its case in earnest to investors, in a process often called a "road show." From there, Twitter will price its shares, and will make its public debut shortly thereafter.