Rdio is releasing a free version of its service today on iOS and Android, bringing personalized radio to non-paying users of its mobile apps for the first time. Free of advertising for now, Rdio’s unpaid offering represents a chance for the underdog streaming service to gain traction by adopting one of the most popular features of its competitors. But with personalized radio a standard feature on rivals like Pandora and Spotify, can even ad-free access make a difference?

Starting today, Rdio’s radio feature, which it calls Stations, is free to non-subscribers on its mobile apps in the United States, Canada, and Australia. Previously, a user who reached the end of Rdio’s 14-day free trial and decided not to pay could no longer listen to music inside the app. Now that user can listen to an unlimited number of artist, album, genre, and track-based stations, in addition to "You FM," Rdio’s personalized take on a listener’s tastes. It comes two months after the company rolled out a similar offering on the web.

To get the complete Rdio service, which includes on-demand listening of tracks and offline song storage, the user still has to pay $9.99 a month. But executives hope that if the people who complete the free trial continue listening to Stations, they’ll be more likely to subscribe in the long run. "We don’t need you to subscribe right away," says Chris Becherer, vice president for product, in an interview with The Verge. "You can live inside Stations for a long time. We think that over time, you’ll start building up your collection, building up your favorites. And whenever you do subscribe, all that stuff is ready to go."

In its basic abilities, Rdio’s free radio service is similar to one offered by Spotify, which launched its own take on Pandora-style passive listening in June 2012. Since it launched a radio feature, Spotify’s number of users has grown by more than a third — a good sign for Rdio, which has struggled to gain mindshare in a crowded market for music apps.

Becherer says things are turning around for the three-year-old company, which was created by Skype founders Niklas Zennström and Janus Friis. For a time in June, it was the number one music app in Apple’s App Store. "That was a big psychological thing for this company," says Becherer, who spent eight years at Apple before coming to Rdio. "People were really psyched about it. For the past couple years it felt like Rdio’s the coolest product, but no one’s talking about us. Now it feels like we’re in the mix."

While he won’t say how many people use the service, the company says its monthly active users are up six times from January to August, and 16 times year over year. Data from Google Trends indicates that interest in the service has spiked this year. And earlier this month, terrestrial radio giant Cumulus took an equity stake in Rdio’s parent company, Pulser Media, and will promote it on its 525 stations. Cumulus will also eventually sell advertising on Rdio to support the free service.

All streaming services seem to be converging on the same truth about online music: on-demand listening appeals to a subset of music fans, but most prefer to listen more passively. Like many of its peers, Rdio’s recommendations are licensed from the Echo Nest, which also powers applications for Spotify, Twitter, MTV, Vevo, and iHeartRadio, among others. 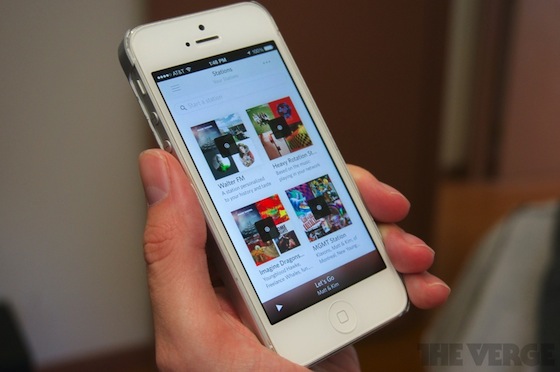 On one hand, Rdio is offering unlimited free music in the hopes that it will serve as a kind of gateway drug that leads listeners to buy the full experience. But there’s another idea at work in the latest iteration of the product: that most music fans want both on-demand and radio services, delivered inside the same app. Pandora and iTunes Radio offer only the former, and Rdio thinks its product offers the best combination of the two. At work, you might use it to listen to a new album from a favorite band. But at the gym, or a house party, you might just want to turn on a radio station and let it play. "I think it’s one universe of music fans," Becherer says. "Everyone at some point in their musical journey has an appetite for both. Some people might skew one way or another, but it’s mostly your life situation that dictates what you want." (It’s not the first to try this approach; Slacker Radio revamped its service in a similar way in February.)

If bringing free radio to its beautifully designed mobile apps draws users by the millions, Becherer would go a long way toward proving that thesis. In the meantime, it’s still an open question whether anyone can profit from streaming music. Rdio has raised $17.5 million and has 140 employees, and you don’t have to be a pessimist to wonder how long it will be able to offer its service if it fails to break out of the pack soon.

Executives dismiss the thought out of hand. "Your Rdio is not going away," says Drew Larner, the company’s outgoing chief executive. Larner announced in June that he was stepping aside to search for an executive that can attract "an enormous user and subscription base." Rdio is getting close to announcing a new CEO, Larner told The Verge, and he will stay on as executive chairman. Stations won’t attract that enormous user base by itself. But as free radio becomes a standard feature in every music app, it’s something that Rdio likely couldn’t live without.