Here's how you build a smart timepiece: attach an iPhone to it

Share All sharing options for: Here's how you build a smart timepiece: attach an iPhone to it

Samsung's Galaxy Gear and Fitbit's upcoming Force wristband can both lay claim to being smarter than your average timepiece, but Bissol's Calibre 2000 outdoes them both. Featuring an automatic Swiss movement exposed by windows at its front and back, this mobile timepiece plugs into the bottom of an iPhone 5 or 5S. It comes in a variety of anodized aluminum hues, matched to Apple's latest iPhone color schemes, and aims to combine the sophistication of traditional watchmaking with the utility of modern technology. The price for one of Bissol's latest is a reported $1,500, though the company also has the earlier Calibre 788 model, which is somewhat more affordable. 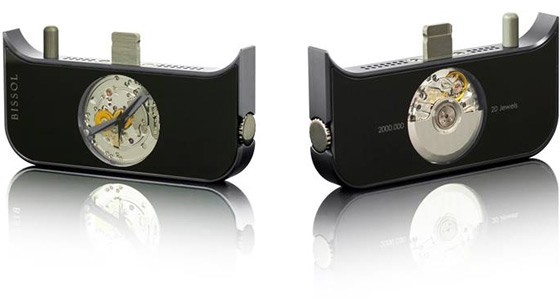