Soccer and slavery: World Cup dogged by reports of labor abuse in Qatar

Share All sharing options for: Soccer and slavery: World Cup dogged by reports of labor abuse in Qatar

A construction worker takes a break in Lusail, a planned city being built for the 2022 World Cup. (Image credit: Cassim Shepard / Flickr)

The 2022 World Cup is still nine years away, but controversy is already brewing in host country Qatar, where construction companies are reportedly building new hotels and stadiums on the backs of slave labor.

In a report published last week, The Guardian alleged that thousands of migrant construction workers face "exploitation and abuses that amount to modern-day slavery" in Qatar, including at one major World Cup complex. According to the investigation, 44 Nepalese migrant workers died between June 4th and August 8th of this year, with the majority suffering from heart attacks or work-related accidents. Thousands more are being forced to work in "appalling" conditions, the paper reported, and some employers are withholding salaries and passports to prevent their laborers from fleeing.

"We'd like to leave, but the company won't let us."

"We'd like to leave, but the company won't let us," one Nepalese migrant worker told The Guardian. "I'm angry about how this company is treating us, but we're helpless. I regret coming here, but what to do? We were compelled to come just to make a living, but we've had no luck."

Officials from Nepal and Qatar disputed the accuracy of the report earlier this week, with the chairman of Qatar’s human rights committee telling The Guardian, "There is no slavery or forced labour in Qatar." Qatari officials later acknowledged that 70 Nepalese workers have died on construction sites since the beginning of 2012, but stressed that 15 have died this year. On Thursday, the government opened an official review into labor conditions for migrants.

Qatar isn't the only Gulf country to come under fire for its treatment of migrant workers; similar practices have been reported in Lebanon, Kuwait, and the United Arab Emirates, as well. But the Qatari situation is unique because of the colossal projects looming on its horizon.

The small desert nation plans to spend more than $100 billion on infrastructure in preparation for the World Cup, including the construction of nine stadiums, twenty-nine hotels, and a new airport. The government and its ruling emir also plan to build several planned cities to accommodate the influx of fans and athletes. The coastal city of Lusail will include resorts, luxury shops, and two golf courses, and its stadium will host the opening and final World Cup matches.

Today, there are around 1.2 million migrant workers in Qatar, and between 500,000 and 1 million additional workers will be needed to complete World Cup construction. The country’s oil wealth and rapid development have made it a destination for poor migrant workers (mostly from South Asia), with immigrants comprising more than 90 percent of its workforce. Qatari labor minister Saleh al-Khulaifi has vowed to crack down on labor abuses with more diligent inspections and random checks on construction companies, but the country is facing increased pressure to take more drastic action.

Two days after The Guardian released its report, the International Trade Union Confederation (ITUC) said that based on current mortality rates, an additional 4,000 workers are projected to die in Qatar by 2022. The International Labor Organization criticized Qatar for not adhering to a global ban on forced labor, while UK Prime Minister David Cameron has urged the country to take greater care of its migrant laborers. 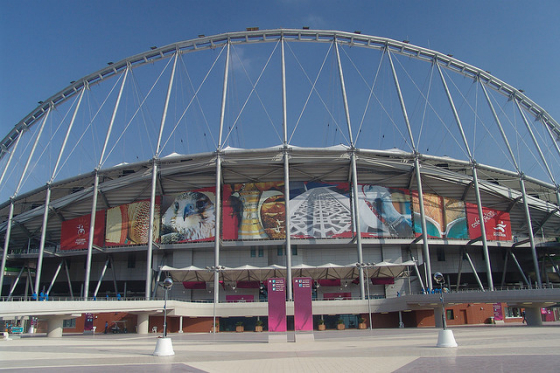 Doing that won't be easy. Underpinning Qatar's labor issues is a well-established employment system known as kafala, which legally ties migrant workers to their employers. Under kafala, workers cannot leave the country or change jobs without permission from their sponsoring employers. Nicholas McGeehan, Gulf researcher at Human Rights Watch, says the system gives too much power to private companies, which are free to retain employees or terminate their contracts as they see fit, leaving migrants with effectively zero legal recourse.

"Kafala puts tremendous power in the hands of the employer."

"There are similar sponsorship systems in other countries, but Qatar’s isn't backed up by proper enforcement or regulation," McGeehan tells The Verge, adding that it has become a customary practice for employers to confiscate workers’ passports upon their arrival. "Kafala puts tremendous power in the hands of the employer, who can do what he wants because he knows the employee can be made illegal and deported at any time."

Laborers who spoke to The Guardian — including those working on the Lusail construction site — said they were often forced to work long hours in 122-degree heat without access to drinking water. Others said they hadn't been paid in months, and that employers were withholding wages to prevent them from escaping.

Narges Erami, a professor of anthropology at Yale University, says she saw groups of workers being transported to and from construction sites in "prison-style" buses during a recent trip to Doha this year. Erami was visiting the country for an academic conference, and colleagues at local universities there told her that the migrant laborers she saw live in "horrible conditions" at camp sites near the Saudi Arabian border. They're typically bussed in to work 12-hour shifts and are forbidden from interacting with Doha locals or tourists, Erami said in an email.

"The will to change is most certainly there."

Qatar has shown a willingness to change its labor practices, implementing an anonymous hotline for workers to report abuses and creating a system of arbitration to settle disputes, but activists say the government must take a greater role in enforcing these laws and changing business culture from the top down. Andrew Gardner, professor of anthropology at the University of Puget Sound, says it will likely take years for that to happen, though there are encouraging signs among Qatar's reform-minded youth.

"From what I've seen and encountered in Qatar, there is already an interest in fixing this system and resolving these issues," Gardner said in an email to The Verge. "The will to change is most certainly there, particularly among the younger generation of Qataris I encountered."

The World Cup and the media frenzy it entails could apply more immediate pressure on Qatar's leadership — no country wants to see its name next to the word "slavery" on front-page headlines — while offering a potentially groundbreaking opportunity for the country to set a higher standard for labor practices across the region.

"If this criticism can lead to real change, it would lead to huge benefits for people working in Qatar and other Gulf states would probably follow suit," McGeehan says. "I think it's the best opportunity for reform we've had yet — but I don't want to get too optimistic."