The sinkhole that swallowed a swamp

Share All sharing options for: The sinkhole that swallowed a swamp

Everyone in the state of Louisiana knows about the Bayou Corne sinkhole. It even shows up on Google Maps. But it still took a year for the crisis to get national attention, by which time the pit of brackish water was 24 acres across. And when the nation finally turned its eye on Bayou Corne, it wasn’t because of the Mother Jones expose. It was because of a YouTube video.

The video, “8/21/13 Slough in,” opens on a copse of hulking cedars at the edge of what appears to be a calm lake. Suddenly, voices in the background shout, “They’re moving!” as a dozen trees glide downward in unison, their tops shaking and quivering as they’re sucked beneath the surface. Soon, the water is still again.

The video was posted everywhere from CBS to Gawker, and now has 6.7 million views. Reporters from CNN, Al Jazeera, and The New York Times headed to Bayou Corne, the unincorporated fishing town next to the sinkhole.

John Boudreaux, the local official coordinating the containment of the sinkhole and the accompanying methane gas leaks, is the one who shot the video. He’s hoping all the attention will inspire help from the federal government, but that hasn’t happened yet.

Waiting has become a theme in Bayou Corne.

“My estimate for just gas removal is three to five years from now, and we’ve been in this event for a year,” says Boudreaux, who’s been at the site every day by 8AM since the sinkhole showed up. “It’s quite frustrating, the amount of time it’s taken to get things accomplished.”

The sinkhole doesn’t look like an ongoing environmental disaster. If you didn’t read the newspapers, watch the YouTube video, or look closely enough to see the miniature bubbles of methane breaking at the surface like a simmering pot, you’d think it was just a lake with a few oil slicks. It even has alligators.

In reality, the sinkhole is a human achievement. It opened up overnight in August of 2012, when the wall of an empty salt mine around 5,000 feet underground suddenly broke. Dirt and rock poured into the cavern, creating a hole at the surface that filled in with water. 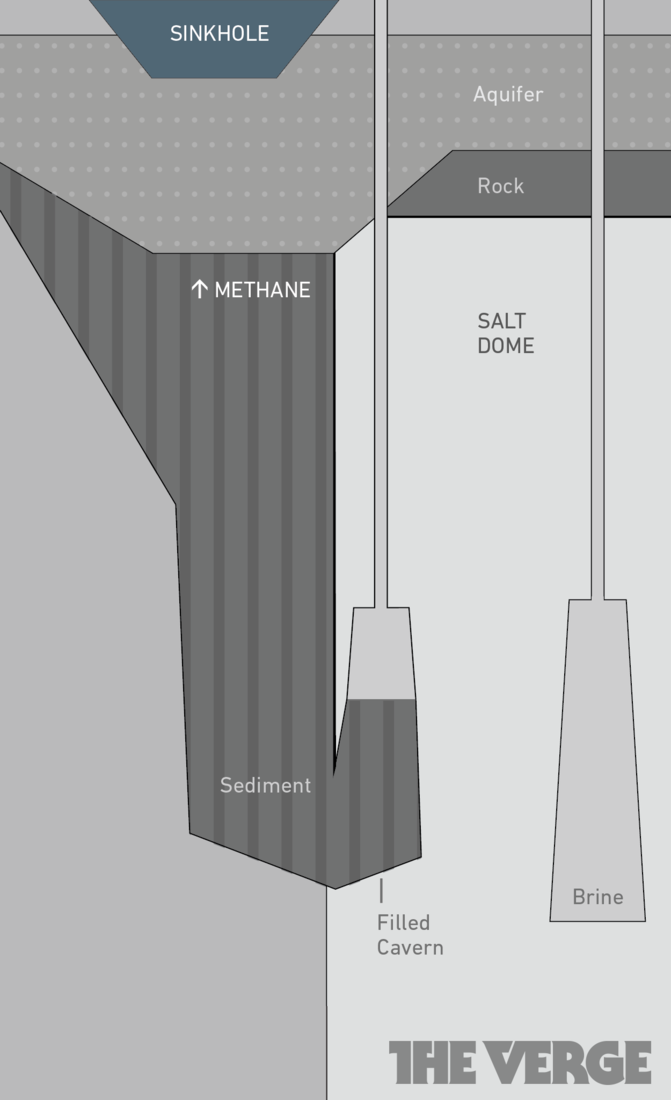 the sinkhole is a human achievement

The sinkhole is now 25 acres at the surface, more than 350 feet deep at its lowest point, and expected to double in size. It’s mostly dormant, except for occasional earthquakes and "burping," in which large bubbles of air, oil, and gas erupt at the surface. Every now and then it sucks down a few trees from the surrounding swamp.

While it hasn’t actually swallowed any property — as far as massive sinkholes go, it’s pretty tame — it has caused methane to leak into a nearby aquifer. The fear is that the highly combustible gas will collect in a crevice or enclosed space and then ignite.

The case has become a curiosity for geologists around the world. Salt mines have collapsed before, and not far from Bayou Corne: the collapse of a salt mine at Lake Peigneur, 45 miles away, led to a sinkhole that swallowed 11 barges. But other mines always collapsed from the top. The salt mine in Bayou Corne breached from the side, so the sediment displacement is harder to predict.

Even after recruiting a team of international researchers to study the sinkhole, local officials still don’t know exactly what caused it or what it will do next. Scientists are using 3D seismic imaging, a mapping technique similar to sonar, to produce mangled-looking images of the subterranean topography. Just these maps take six weeks to set up and several months to process.

"I use the BP oil spill and the difficulty of working in 5,000 feet of water for comparison," says Patrick Courreges, policy analyst at Louisiana Department of Natural Resources. "It took five months to get that thing under control. We’re dealing with 5,000 feet of rock."

Louisiana, Mississippi, and parts of Texas sit atop large salt deposits shaped like domes. The easiest way to mine the salt is to dig out a cavern, pump water through, and suck it back out as brine. The salt is then extracted and sold for use in household petrochemical products such as PVC pipe, CDs, and bleach.

In 2010, this particular mine, one of many underneath Bayou Corne, failed a routine pressure test. The owner, Texas Brine Company, "plugged and abandoned" the hole it had created in the salt, which included filling it with brine to equalize the pressure. No one from Texas Brine or the state regulatory agency, the Department of Natural Resources, thought there was any danger of a breach.

But two years later, something happened. "Our employees came to work and looked out, and the swamp had disappeared," says Sonny Cranch, the crisis public relations specialist hired by Texas Brine. 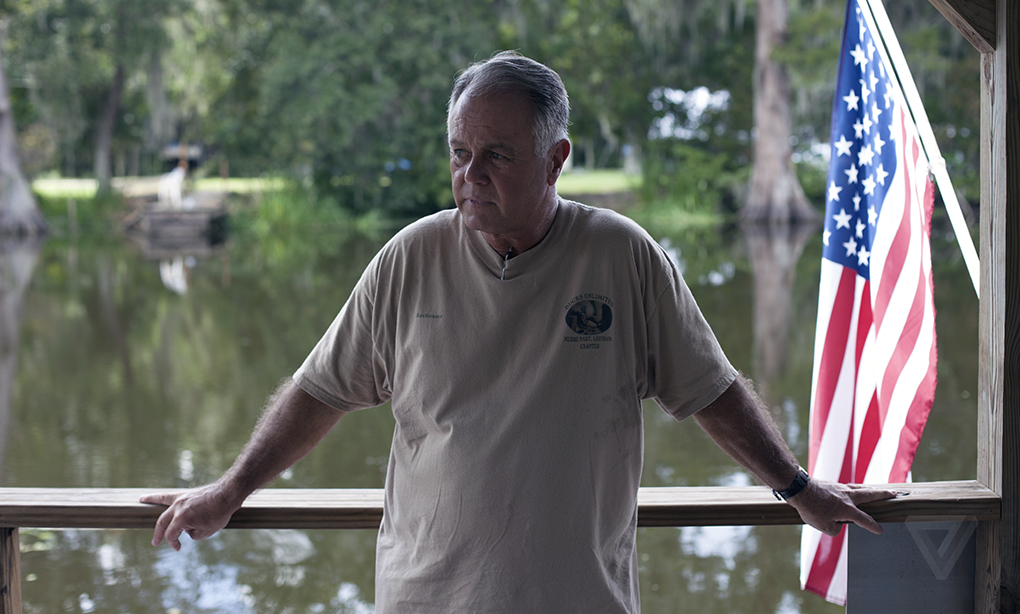 Alarmed, the parish issued a mandatory evacuation, which is actually a step below a "forced" evacuation: essentially a very, very strong suggestion that the area’s 300 or so residents get the hell out. Many did, but many are still paying their mortgage and utility bills, hoping to one day return.

Texas Brine is now being sued by the state of Louisiana to recoup the $8 million it has spent responding to the sinkhole, most of which went to hiring scientists to figure out what’s going on. The company is also the target of a class action suit.

No one feels the pain of waiting more than the residents of Bayou Corne, who saw their quiet, tight-knit community turn into the 24-hour sinkhole show. The residents who stayed — and many who left — don’t go a day without thinking about the sinkhole.

Mike Schaff chose not to evacuate, but now he wants to leave. His boat has spiderwebs, his garden has weeds, and he doesn’t let his grandkids come over anymore. "My wife lives in another part of the state. We were planning on retiring here," he says. "Now, instead of coming up and enjoying the weekend, sitting on the patio drinking a few glasses of wine, we wake up in the morning and we go look for houses. That’s the new reality."

Toward the end of September, the Bayou Corne response team had a small breakthrough. The 3D seismic images finally came out, revealing two very deep reservoirs of gas that were likely feeding the methane leaks. The findings showed there is also a lot more gas in the aquifer than the 45 million cubic feet previously estimated, but the conclusion was the same: it could take years to get rid of all the gas.

Even after the gas is cleared and the sinkhole stops growing, scientists will have to keep monitoring the area for decades, says Courreges, the state analyst. "While it was a man-made action that started this, it’s geology and natural forces that are making everything happen," he says. "And geology happens slow."